A federal judge suspended a rule on Monday that required women seeking the abortion pill to visit a hospital, clinic, or medical office to obtain the pill. Abortion businesses have been using COVID-19 as a loophole to promote dangerous do-it-yourself abortions rather than lose money from abortion sales during the pandemic.

REMS (Risk Evaluation and Mitigation Strategy) is a drug safety protocol that the FDA can place on certain drugs that carry a risk of serious complications. In this case, the American Civil Liberties Union filed a lawsuit on behalf of the pro-abortion American College of Obstetricians and Gynecologists asking for an emergency order to forgo the REMS regulation that requires patients to go to a medical facility to obtain the abortion pill, known as mifepristone.

Siding with the abortion industry—which has no interest in women’s safety—U.S. District Judge Theodore Chuang ruled that “in-person requirements” for obtaining the abortion pill create a “substantial obstacle” to abortion. He said that “in light of the limited timeframe during which a medication abortion or any abortion must occur, such infringement on the right to an abortion would constitute irreparable harm.”

However, it is the opposite that is true. Taking the abortion pill without first receiving an examination can cause women great physical harm.

The abortion pill has massacred at least 24 women & 3.7 MILLION children

134,884 people have been killed by #COVID19 & abortion advocates are fighting to add to the death toll

The “timeframe” Chuang wrote of does not have anything to do with a woman’s health. It is not imperative that a woman undergoes an abortion as she would need to undergo chemotherapy. Abortion is not about healing her or extending her life, but about ending the life of her child. This “timeframe” is the space between fertilization and birth — birth being the moment when a human being finally earns his humanity by simply passing through the birth canal.

The abortion industry denies the humanity of the children it kills, and in its desire to push to allow DIY abortions, affirms that it doesn’t care about the lives of women either.

READ: ‘No test’ abortion isn’t the abortion industry’s response to COVID-19. They planned it years ago.

The purpose of undergoing a physical examination before taking the abortion pill is to ensure the gestational age of the child is not more than 10 weeks, that the woman is either Rh negative or positive, and that the pregnancy is not ectopic. In any of these cases, taking the abortion pill poses a potential health risk to the woman, including the possibility of future pregnancy loss, hysterectomy, and death.

In the video below, former abortionist Dr. Anthony Levatino describes the abortion pill process and the potential risks to women who take it:

Twenty-four known women, including 18-year-old Holly Patterson, have died after taking the abortion pill. Patterson died seven days after beginning the abortion pill regimen—the same day she was scheduled to return to Planned Parenthood for her followup to ensure the abortion was complete. Yet the abortion industry doesn’t think women need to be seen in person at all and has recently begun promoting “no test” abortion, which is exactly what it sounds like—no lab tests, no confirmation of gestational age, no ruling out of life-threatening ectopic pregnancy before the pill is dispensed.

Thousands of additional women have experienced serious complications and even hospitalizations from taking the abortion pill, but it is impossible to know the true number of complications. Half of all U.S. states aren’t even required to report complications from abortions, and some abortion groups instruct women to lie when they go to the emergency room and claim they are having natural miscarriages. 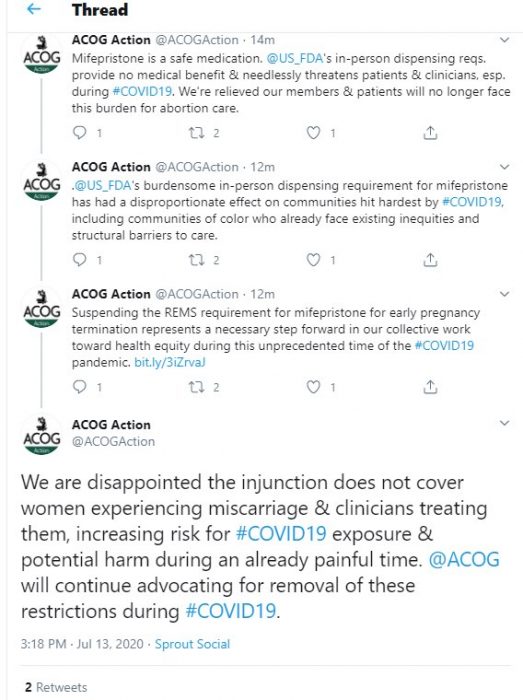 In addition, if the abortion pill were to fail, the woman would be at risk of infection. Women can also suffer extreme blood loss that may require hospitalization and blood transfusions. “For the about 5 percent of women whose babies are not killed and expelled by the drugs, a surgery is required basically to save the woman’s life as infection can set in if the dead infant or tissue remains in a woman’s womb to fester,” stated MedGenMed.

… The abortion pill regimen works by starving the developing embryo of nutrients and forcibly expelling him or her from the mother’s body. This lethal regimen is approved by the FDA to kill children up to the tenth week of pregnancy, though abortion businesses and clinical trials openly dispense it further into pregnancy.

This is a sad day for women and children across the country. By pushing to enjoin the FDA REMS regulations, the abortion industry, which profits off of killing children, has revealed its ugly lack of care towards pregnant women. Our reporting shows that Danco, the abortion pill manufacturer, is veiled in secrecy….

The abortion pill doesn’t save women’s lives; it endangers them. To allow abortion businesses to take advantage of the COVID-19 pandemic in order to profit off of risky DIY abortions is unethical and unacceptable.

Editor’s Note: This post was updated after publication with a statement from Lila Rose.