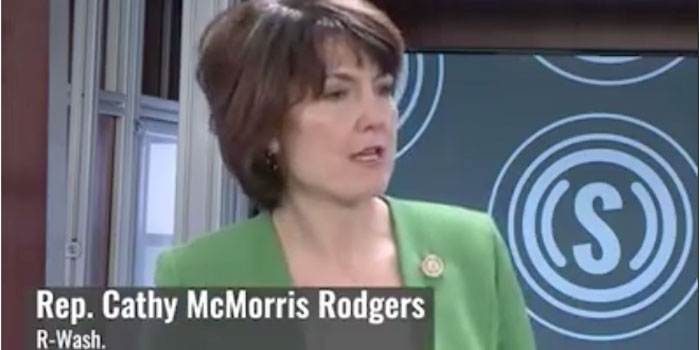 Rep. Cathy McMorris Rodgers is not just a Congresswoman — she’s a mother to Cole, a little boy who has Down syndrome. So when she read Ruth Marcus’s column in the Washington Post stating how women should have the right to abort their children with Down syndrome, she found the remarks reprehensible. Marcus wrote, in part:

I can say without hesitation that, tragic as it would have felt and ghastly as a second-trimester abortion would have been, I would have terminated those pregnancies had the testing come back positive [for Down syndrome]. I would have grieved the loss and moved on….

But accepting that essential truth is different from compelling a woman to give birth to a child whose intellectual capacity will be impaired, whose life choices will be limited, whose health may be compromised…. Down syndrome is life-altering for the entire family….

You can call me selfish, or worse, but I am in good company. The evidence is clear that most women confronted with the same unhappy alternative would make the same decision.

McMorris Rodgers replied, bluntly, in a Facebook video posted by The Daily Signal, that Marcus is “so wrong. She doesn’t know what she’s talking about.”

… Just because something is hard doesn’t mean that it’s not positive. And I think we all know that in our lives. And getting the news that your baby is, in our case, born with that extra 21st chromosome, most people know it as Down syndrome… that’s tough news to receive…. For her to just say, “Oh, I would just have an abortion, mourn for a few days and move on,” I found very offensive. And it’s not focusing on what every person has to offer.

Every person has value and a purpose, and that is what America is all about.

McMorris Rodgers is right. Every person has value. Blake is a business owner with Down syndrome. Charlotte has delivered speeches before the United Nations. Ryan has been involved in missions work. Mikayla has competed in the Miss USA pageant. Valerio saved a girl from drowning.

These people make a difference in the world and in the lives of those around them. They are not defined by their Down syndrome. As Cathy McMorris Rodgers said, they have a purpose, and they have a great deal to offer to the rest of the world.