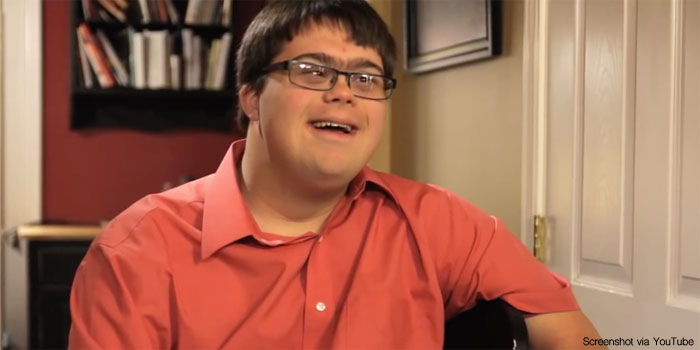 According to Ryan Pittman, we’re all different — and he says he is different because he has Down syndrome. But we’re also all the same, because “we need God.”

In a 2011 testimony video from Fellowship Bible Church in Nashville, Tennessee, Ryan’s parents, Ron and Cheryl, described their third son Ryan’s persistent desire to get involved in missions work in Peru. At first, his parents hesitated, not knowing how Ryan would handle the travel involved. But they eventually relented and agreed to go on the trip together as a family. After connecting with the mission church in Peru, the pastor there learned of Ryan’s Down syndrome and was very interested in having he and his family work with other families of special needs children in Peru.

“It was an eye-opener for me that God had a bigger plan for what we were doing,” said Ryan’s father. “Cheryl had prepared a lesson… for moms, all about raising a child with special needs… and how to impact the world around you,” Ron said. But before Cheryl gave the lesson, she asked if Ryan could read his testimony. And he did.

The people they were meeting with were stunned because Ryan could read, and one woman said it inspired her to work even harder with the special needs children there.

“It was amazing to watch the look into the eyes of these mothers, the hope that was just burning in them,” Ron said. “I had no idea that God was going to use him that way, that he was going to make such an impact with so many people, just by simply telling his story.”

When parents of children with Down syndrome receive a prenatal diagnosis, all too often, medical personnel are less than encouraging, advising abortion and offering little more than outdated information on the condition. Parents, much like the parents of special needs children in Peru, are often told only of the potential limitations their children may have, instead of the possibilities of what they can achieve. Far too often, those in the medical community paint a picture of worst case scenarios for parents, and in despair and fear, many choose abortion.

Countries around the world seem to be at war with Down syndrome, claiming to have eliminated it… but what they’ve really done is sought out and eradicated those children before birth. But killing differently-abled people — valuable people just like Ryan — is simply not a cure for any condition, and it’s a discrimination of the worst kind.

Ryan is right in saying that we’re all different, and yet we’re the same, too. It’s time that we start realizing that each life has a purpose, and is created with purpose.