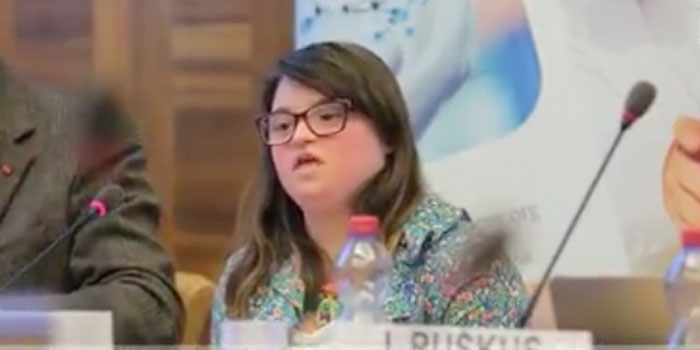 Last week, she spoke before the United Nations again, calling for an end to eugenic abortion.

She said, in part:

The future of Down’s syndrome is in grave danger. Around the world, more than 90% of babies found to have Down syndrome are aborted up to birth. A mother’s womb is the most dangerous place for a baby with Down syndrome to be. Governments and health ministers are keen to get rid of us. Some countries like the Netherlands have put a price tag on our heads. They think the world will be better without people like me.

We have made so much progress in the past 60 years. We have gone from being left in hospitals after birth to being raised at home by families who love us. We have gone from being chucked into special schools to being in mainstream education. Some of us are even going on to university. So, why are we in such danger of being made extinct today? Because eugenics is becoming a thing to admire.

A perfect baby, a perfect family, a perfect society are now possible. But are they really? No, of course they aren’t. There is no such thing as perfection. You can try to kill off everyone with Down syndrome by using abortion, but you won’t be any closer to a perfect society. You will just be closer to a cruel, heartless one, in my opinion.

The only way to change society’s view of us is to be part of our community. To go to the same schools as other children, to not be hidden away like we were in the past. We need to be employed, we need to receive training so we can work. As long as people with Down syndrome are kept out of mainstream society, we will be feared, not accepted, and aborted into extinction….

But unfortunately, achieving our goals, going to mainstream schools, isn’t enough to stop countries from trying to eradicate Down syndrome. We need laws to protect us from eugenic abortions. Discrimination starts before birth and lasts our entire lives. We need laws like those passed in Ohio and other American states that ban abortions for Down syndrome….

People like human rights “expert” Ben Achour says women should be made/forced to abort if the baby has Down syndrome. How is that not eugenics? How is that acceptable to target a group of human beings for extinction? Is that not what eugenics is? To get rid of an entire group of people?

If the UN is really serious about human rights, then they will start to act and condemn eugenics against my community….

Women are frequently pressured to have abortions after receiving a prenatal diagnosis of Down syndrome, and some doctors have admitted to emphasizing or exaggerating the negative aspects to persuade women to abort. And this is exactly why laws banning abortion to due Down syndrome and other disabilities are needed — because the reality is that preborn babies with Down syndrome are all too frequently targeted for death.

Unfortunately, this message is one the United Nations did not want to hear.

In an interview with Live Action, Fien explained that they tried to censor her speech. “I want as many people as possible to hear what I said because the UN tried very very hard to keep me from saying it. They said I need to be more diplomatic,” she said. “They wanted me to remove genocide and my criticism of the UN. I refused. Because if 100% of babies are aborted up to birth it is genocide.”

READ: Discriminating against people like my son, with Down syndrome, must end

Fien was required to send a copy of her speech to the UN first, and they evidently were not pleased. “They tried to bully me to change it, but I said no,” Fien explained. “The moderator said my speech and language wasn’t diplomatic. So, I said I’m not a diplomat or politician so why would I write diplomatically?” But even then, they refused to give up — and went as far as reaching out to Fien’s mother to try to force her to change it against Fien’s will. “They called my mum and asked her to make me change!” she said. “Mum said, ‘You’re not going to change it, are you?’ and I said, ‘Nope, never’.”

After Fien gave her speech, the UN seemingly retaliated. “They didn’t put my speech up [on their website] until I complained,” she explained. “I said they were trying to censor me. Then today, it went up after I tweeted what they did.” Still, she seemed to gain some support. “The UN Ambassador for Disabilities shook my hand and agreed. So did the Ambassador of Poland,” she said. “[But] the others not so much.” Fien said the rest ignored her; however, she wasn’t bothered. “It’s not a popularity contest. I want Iceland, Denmark to be punished for genocide of Down syndrome,” she insisted.

Fien also faced censorship on Twitter, which inexplicably covered a tweet with her speech due to “sensitive” material. 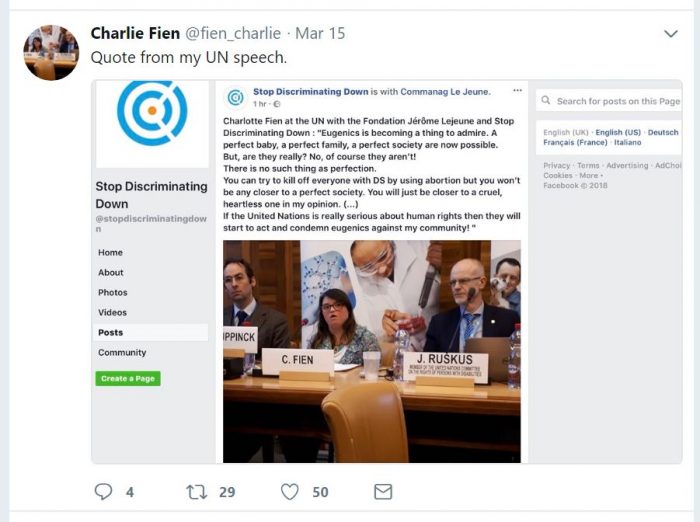 Fien said this, likewise, is a regular occurrence, remarking, “They block all of my pro-life pictures.”

It’s hard to understand what is so offensive or horrifying about the notion that people with Down syndrome have a right to life, but the reason behind it is clear: ableism, which drives eugenics, is alive and thriving across the globe today. People who are viewed as inferior are targeted for death, whether those people have Down syndrome in some countries or are female in others. And regardless of their reasons, eugenics must be fought at every opportunity.

As Fien said, we must end this genocide against people with Down syndrome.