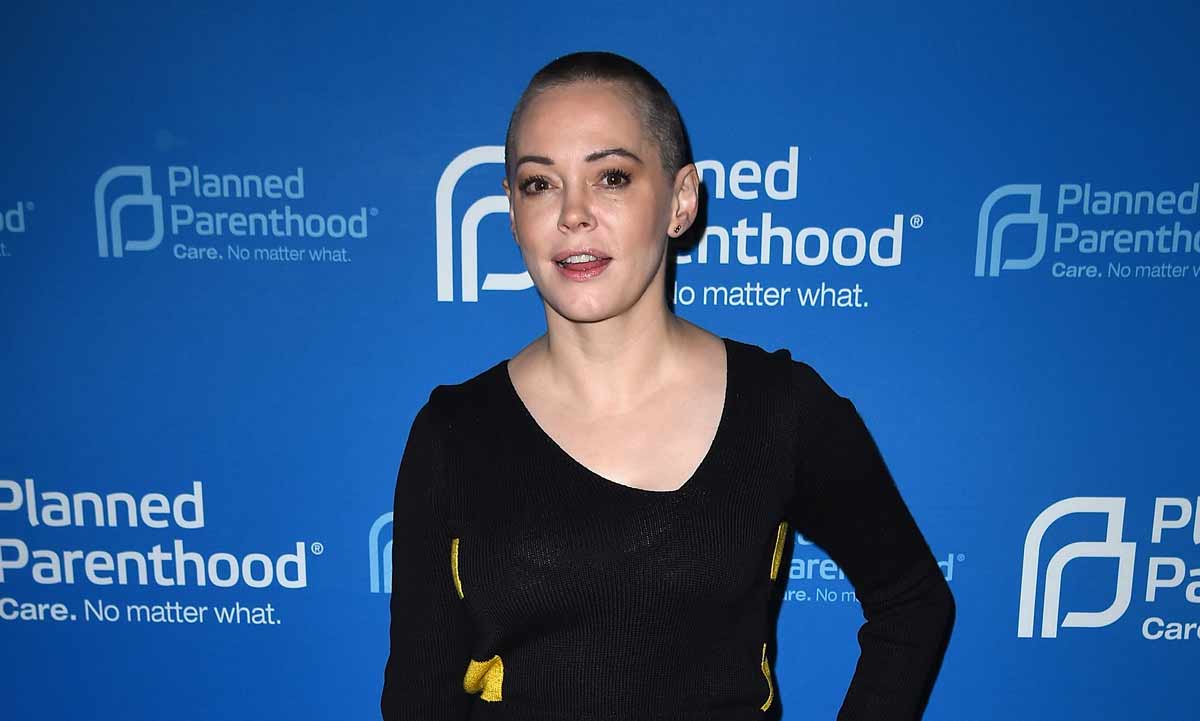 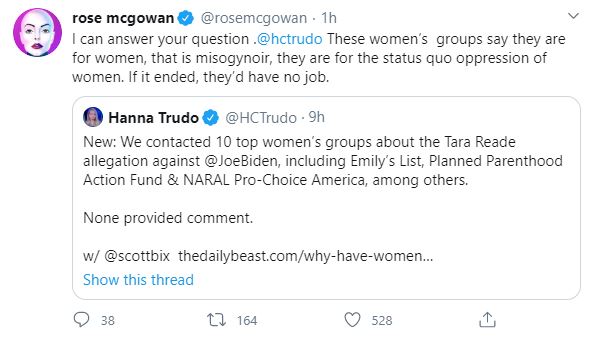 McGowan’s surprising tweet was a response to Hanna Trudo of the Daily Beast who wrote, “New: We contacted 10 top women’s groups about the Tara Reade allegation against @JoeBiden, including Emily’s List, Planned Parenthood Action Fund & NARAL Pro-Choice America, among others. None provided comment….”

In response, McGowan tweeted, “I can answer your question .@hctrudo These women’s groups say they are for women, that is misogynoir, they are for the status quo oppression of women. If it ended, they’d have no job.”

Within two hours, her comments were retweeted nearly 200 times and liked by over 600 people — and with good reason. McGowan is absolutely right. Though she has spent years supporting Planned Parenthood — and in 2016 even tweeted that the abortion giant “should be funded, supported, & appreciated” — it appears she may be starting to see inconsistencies.

In recent years, McGowan also had a relationship with EMILY’s List, appearing in a “Women Can Stop Trump” video for the organization before the 2016 presidential election. Now, with the group’s failure to speak out against Joe Biden’s sexual assault allegations, perhaps McGowan is seeing a double standard. For pro-abortion groups to speak against someone “on their own side,” so to speak, could be counterproductive to their mission. As McGowan said, these groups need women to remain oppressed in order to keep their jobs. Women don’t walk out of abortion appointments with their fists pumped high in the air in victory. As pro-life author and speaker Frederica Mathewes-Green so famously said, “No one wants an abortion as she wants an ice-cream cone or a Porsche. She wants an abortion as an animal, caught in a trap, wants to gnaw off its own leg.”

For abortion profiteers, there’s reason to convince women to abort. Past employees have noted that Planned Parenthood actually has abortion quotas, and in order to meet their goals, they must sell abortion. Girls are groomed for abortion starting with comprehensive (often Planned Parenthood-affiliated) sex ed, which encourages girls to partake in dangerous sexual practices. They are also taught that it would be too difficult for them to be mothers while in school or while pursuing their careers. Women are taught not that they are free to choose, but that they have to choose between their own children and their best-laid plans.

Pregnancy discrimination in the workplace exists, and the abortion industry – rather than fight against that injustice – has been known to use these financial, mental, and emotional pressures to convince women that abortion is their best or only real option. Considering the vulnerable state of the women experiencing unplanned pregnancies, the abortion industry functions in a predatory manner. One study revealed that over 73 percent of post-abortive women felt pressured to abort. Women who are pregnant because of rape are often used as scapegoats to keep abortion legal, but many of these women have said their abortions were actually far worse than rape.

Abortion businesses including Planned Parenthood have been caught lying to women about the development of their children within the womb, calling their preborn babies “blobs of tissue.” Live Action’s Inhuman investigation exposed this when investigators visited abortion businesses and found abortionists including Dr. Laura Mercer claiming that at 23 weeks a preborn child “doesn’t even look like a baby yet.”

Planned Parenthood consistently fights against ultrasound laws that require abortionists to offer women the chance to view their ultrasounds before going through with an abortion. Planned Parenthood Action called showing women their own children “burdensome,” yet abortionists use ultrasounds regularly to get an accurate gestational age so they can determine which abortion procedure to use — and sometimes, abortions are even done under ultrasound guidance. Offering a woman the chance to see the ultrasound is therefore not “burdensome,” but it could lead her to decide not to go through with the abortion. Some studies have estimated that 78 percent of women choose life after viewing their ultrasounds.

According to former Planned Parenthood staffers, the abortion industry treats women like “cattle“– rushing them through abortions so quickly that facilities don’t have time to clean between patients, creating “filthy” and “horrendous” conditions and leaving women at risk of infection. Some former abortion workers have reported rushing 75 women through abortions over an eight-hour day. Negligence runs rampant in the abortion industry and Planned Parenthood is no exception, with one Missouri location using rusty machines and “bloody single-use plastic tubing… that was never disposed of….” They get away with it because some state health departments don’t hold them accountable. The health departments that do try to hold them accountable are accused of unfairly targeting abortion businesses for nefarious reasons. The facility of notorious late-term abortionist and convicted killer Kermit Gosnell became known as a “house of horrors” because of how horrific it was inside – but he saved the dirtiest parts of the clinic for Black women.

Misogynoir is misogyny directed specifically at Black women. Planned Parenthood’s very existence was built on the eugenic views of founder Margaret Sanger, who pushed birth control on certain groups of women in order to slow or stop the births of those perceived to be a ‘drain’ on society. Planned Parenthood continues her mission today. According to the Centers for Disease Control, Black women have an abortion rate of 25.1 — nearly four times greater than the White abortion rate and twice the rate of Hispanic women. Black women account for 38 percent of abortions, yet the Black community makes up just 12 percent of the population of the U.S.

Black leaders including Dr. Mildred Jefferson, Dr. Dolores Bernadette Grier, Fannie Lou Hamer, and Rep. June Franklin all warned that abortion would be used as a way to wipe out Black Americans. Today, in New York City, about half of all preborn Black babies are killed by abortion. The majority of abortion businesses are located in minority neighborhoods and use marketing tactics urging Black women towards abortion. One billboard in Dallas, Texas, urged that “Black women take care of their families by taking care of themselves” with abortion, proclaiming that “abortion is self-care” for Black women. Planned Parenthood specifically used fear-tactics to scare Black women into abortion when it tweeted, “If you’re a Black woman in America, it’s statistically safer to have an abortion than to carry a pregnancy to term or give birth.” Yet, Planned Parenthood isn’t doing anything to help make pregnancy safer for Black women, as prenatal services are practically nonexistent there. Yet apparently it will encourage the abortion of Black babies as a twisted way of somehow easing the minds of Black women afraid of dying in childbirth.

McGowan is one of the few assault survivors and #MeToo movement leaders to continue to fight back against powerful individuals who use their status to sexually assault people. In 2017, McGowan publicly asserted that Hollywood film producer Harvey Weinstein had raped her. (Weinstein was just recently convicted of rape in New York, which carried with it a sentence of 23 years in prison.)

Planned Parenthood, though it has been vocal about sexual abuse when it comes to accusations against those on the “right” — including President Donald Trump and Supreme Court Justice Brett Kavanaugh — has remained silent on the allegations against former Vice President Joe Biden. Planned Parenthood launched a six state “We Believe Survivors” effort to support Kavanaugh accuser Dr. Christine Blasey Ford, but as McGowan and others have pointed out, America’s number one abortion provider has remained completely silent regarding Biden’s accuser Tara Reade. Biden supports Planned Parenthood; Trump and Kavanaugh do not. 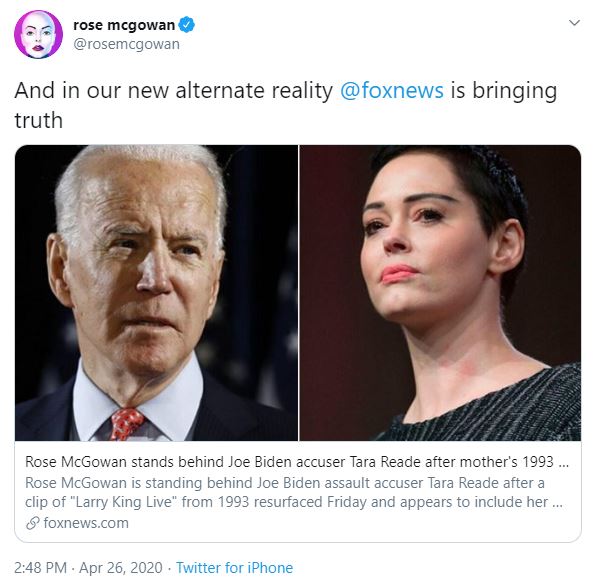 Planned Parenthood actually has a long history of supporting sexual abusers and even helping them to escape prosecution. Live Action’s Aiding Abusers docuseries exposed the abortion corporation’s horrific habits of committing abortions on underage girls despite their legal obligation to report the pregnancies as possible abuse of minor girls as young as 12. Instead of reporting the abuse, they took abortion money from abusers and returned the victims to their clutches. From there the abuse continues. Many of these instances of cover-up have led to lawsuits against Planned Parenthood.

In the case of Tyler Kost, who raped a 15-year-old girl, a Tempe Planned Parenthood counselor told the girl’s mother that it “wasn’t worth the hassle” to report the rape.

John Haller sexually assaulted a 14-year-old girl on the soccer team he coached. When she became pregnant, he told her “he was going to be in serious trouble” and convinced her to abort by saying he “loved her and if she had the abortion they would stay together” and be married. Planned Parenthood took Haller’s word that he was the girl’s father, committed the abortion, and sent the victim away with her abuser.

The Aiding Abusers docuseries reveals how Planned Parenthood staff was caught telling “sex traffickers” that they could pose as the guardians of their underage victims in order to secure abortions for them. Planned Parenthood advised the undercover investigators that sex traffickers should lie about the ages of their young victims, and even gave them specific information on how to secure abortions, saying, “You never got this from me.”

The truth about Planned Parenthood and the entire abortion industry is that it does not care about women. McGowan is right. Abortion businesses need women to remain oppressed or their entire business model would collapse.