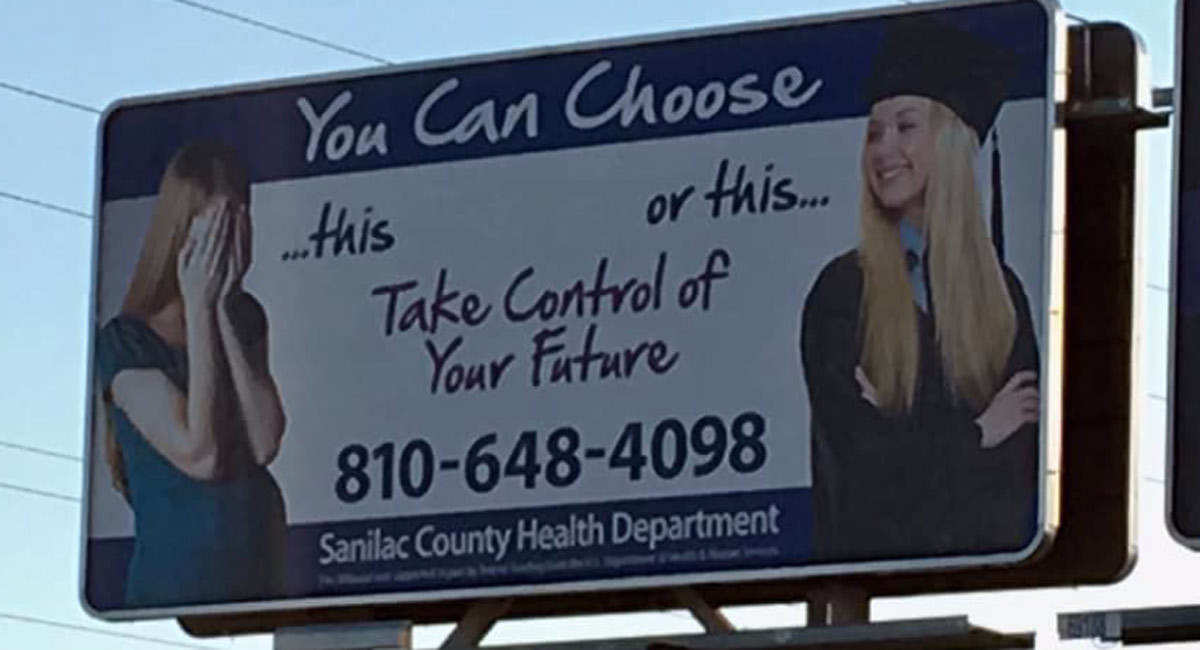 A billboard advertisement by the Sanilac County Health Department in Michigan was widely slammed by pro-lifers for its sexist and disempowering message. The image on the billboard shows a pregnant woman covering her face with both hands, apparently crying, juxtaposed with a blond woman wearing a cap and gown, arms crossed and looking confident. The text reads “You can choose this,” next to the crying woman, and next to the graduating one: “… or this. Take control of your future,” implying that a young woman cannot have both an education and motherhood.

The offensive message was decried by women on Facebook. “Is it just us, or does it seem like they’re telling women that we have to choose between being mothers or being successful?!” said Protect Life Michigan on their Facebook page. In response, the group linked to its Project Rosie initiative, which aims to support women in unplanned pregnancies. “How is ‘have a baby or don’t graduate’ female empowerment? This is insulting,” said another user. Others told stories of their mother’s success in pursuing single or multiple degrees with any number of children, such as Iesha Champs, single mother of five who put herself through law school.

In the comments of their Facebook post, Protect Life Michigan suggested women post their graduation photos with their children, which they will collect into a collage and post Monday with the caption, “Watch us do both!” “Maybe we’ll also email it to the Health Department,” they said.

READ: Schools like this one give pregnant teens a brighter future

Late Friday, as condemnation of the billboard reached viral status, the Sanilac County Health Department updated its Facebook page with a response to the pro-life outcry. It read:

The Sanilac County Health Department would like to acknowledge the outpouring of concern in response to a billboard that has been recently displayed in our county. First and foremost, we appreciate the many members of our community that contacted us with their apprehension for the messaging that is perceived on the billboard. We now realize, and apologize, that our original intent for the billboard was not correctly portrayed by its content. We believe in strengthening the health and wellness of all our community members; women, children, and men, and this billboard did not accurately portray that. Please accept our apologies and know that the billboard is being taken down as quickly as possible.

In September, a similar ad ran in the UK aimed at promoting emergency contraception for pregnant teenagers. The ad implied that motherhood makes a woman unattractive and that pregnancy ruins life.

The ill-fated Michigan billboard highlights the lies that are told to women experiencing unplanned pregnancies, essentially that they are not strong enough to do what many women have done before them — that is, to both achieve their educational goals and raise a child. It is a lie that is not told to men, and is designed to line the pockets of abortion providers who stand to gain from women choosing abortion. 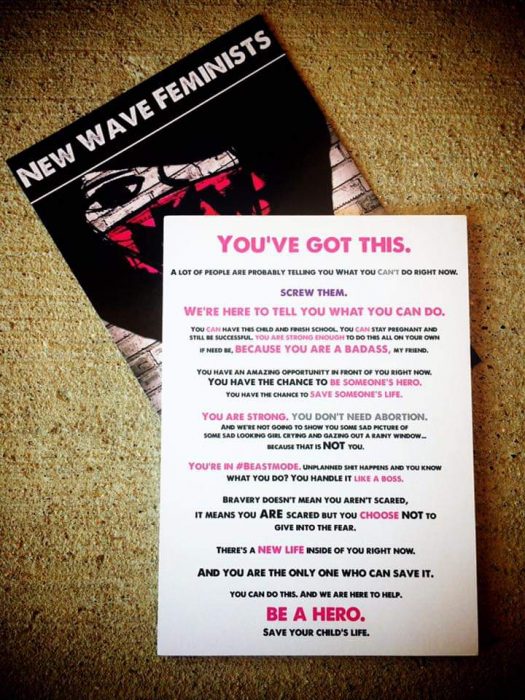 Pro-life organizations are trying to show what true empowerment looks like. New Wave Feminists, for example, has a card that reads, “You’ve got this. A lot of people are probably telling you what you can’t do right now. Screw them. We are here to tell you what you can do. You can have this child and finish school. You can stay pregnant and still be successful. You are strong enough to do all this on your own, if need be. There’s a new life inside of you right now. And you are the only one who can save it. You can do this. And we are here to help. Be a hero. Save your child’s life.”

Editor’s Note: If you are experiencing an unplanned pregnancy and need help in your area, visit OptionLine.org.