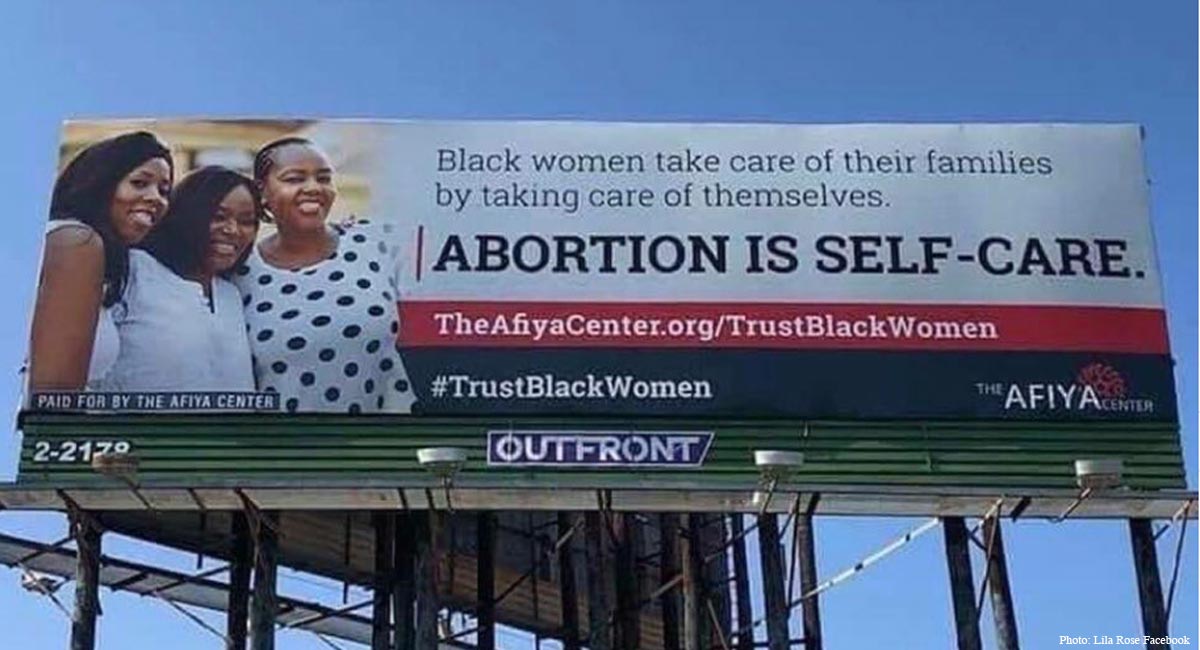 If you look at the history of the abortion movement, both in America and worldwide, it has roots in the population control and eugenics movement. Many would argue that these roots still run deep. Planned Parenthood, in fact, was founded by a eugenics and population control advocate, Margaret Sanger. She spoke out often against having too many of the poor or the disabled, believing they were “unfit” to reproduce. While she never definitively came out as a racist, in Sanger’s time, most minorities were poor.

A 2011 report found that the majority of Planned Parenthood centers are located in minority communities. And Black women abort at disproportionately high rates. So imagine pro-lifers’ disgust at seeing a billboard actually encouraging Black women to kill their preborn children as part of “self-care,” under the guise of “taking care of their families.” But this isn’t self-care. It’s killing:

The billboard, pictured below, was seen in Dallas, Texas. Live Action President and Founder Lila Rose noted on Facebook:

This is a billboard that was placed in Dallas, Texas, marketing itself directly to the Black community.

The phrase says “abortion is self-care,” and it encourages Black women to “take care of their families by taking care of themselves.” It’s sick, and it’s extremely deceptive.

Blacks and minorities have long been the targets of eugenicists like Planned Parenthood founder Margaret Sanger.

Abortion has decimated the Black community. Blacks make up 13% of the U.S. population, but comprise of 35% of abortions.

Every American should be sickened by how the abortion lobby is teaching Blacks to exterminate themselves by selling abortion as “self-care” and something good.

Obianuju Ekeocha of Culture of Life Africa posted on Twitter:

The boldness of abortion-racism. Black communities are being targeted by the abortion industry with black women 3times more likely to abort their babies than white women. Yet, here is a billboard campaign to glamorize the killing of black babies. Dear sisters,wake up & walk away.

The boldness of abortion-racism.
Black communities are being targeted by the abortion industry with black women 3times more likely to abort their babies than white women.

Yet,here is a billboard campaign to glamorize the killing of black babies.
Dear sisters,wake up & walk away. https://t.co/8O1uGDmQcN

The world’s largest population control entity, the Ford Foundation, funds radically pro-abortion “reproductive justice” organizations million$$$ of dollars. Now, those “minority-run” groups are claiming that killing members of your family is “self-care”! ? Here’s the latest example that just went up in Dallas. Keep in mind, abortion is the leading killer in the black community, outnumbering the top 15 causes of death, combined….

The billboard was paid for by The Afiya Center, which states it “aims to… educate the public about the harm caused by decades of anti-abortion laws, and to hold lawmakers accountable for political attacks on reproductive health care.”