The latest in a series of videos exposing Planned Parenthood’s complicity in covering child sexual abuse features an attorney who represented actual victims of the abortion corporation’s “don’t ask/don’t tell” policies on reporting sexual abuse. The interview, conducted by Live Action, comes at a time when society has demanded that organizations who are complicit in covering sexual abuse be held to account. This call has been loud in the media, politics, Hollywood, and sports. The one place this has been glossed over and nearly ignored has been with regard to Planned Parenthood’s complicity. 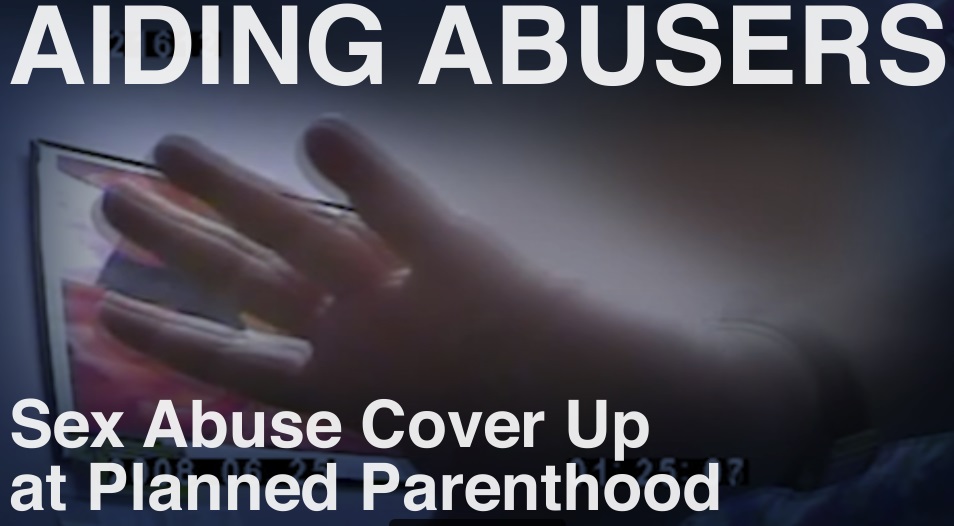 The “Prosecution” video in Live Action’s multi-part series, Aiding Abusers, opens with a statement by Steven Spielberg addressing the sexual abuse scandal in Hollywood that catapulted the #MeToo movement: “The other thing we have to think about is this: Hollywood and celebrity gets a lot of recognition. You can’t just think of this as a Hollywood problem. And we can’t forget the people that can’t afford attorneys. We can’t forget those people that are afraid to come out to say what happened to them because they have nobody to represent them or to stand up for them. I am more concerned about that group than I am about the celebrities that are being exposed and immediately get a huge amount of attention…. [T]hese kind of crimes of sexual assault are happening daily.” 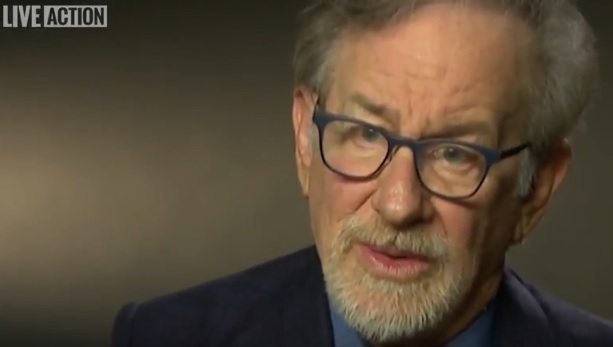 What the Hollywood producer said is especially true when it comes to Planned Parenthood’s victims of abuse cover-up. This multi-million dollar tax funded organization has influence in very powerful circles like the media, Hollywood, and political power structures, outed for covering abuse in the past.

No one knows this more than Ohio litigator Brian Hurley, Esq., whose track record of going after those complicit in covering up sexual abuse is stellar. Hurley dared to face off against Planned Parenthood to defend the young victims of abuse covered-up by this powerful organization. He also once brought charges against the Catholic Church for its role in covering up the sexual abuse of young boys, and later brought two civil cases against Planned Parenthood for covering up the rape of teenage girls.

“I’m a devout Catholic, and I believe the Catholic Church had to be taken to task for what it did and didn’t do with respect to the abuse of boys, mostly boys,” Hurley told Live Action News. “And I was proud as being part of a prosecuting attorney’s office that we brought claims – charges – against the Archdiocese of Cincinnati for its conduct. And I think it gave me credibility.”

But Hurley noted nothing would prepare him for what would take place when he agreed to represent two victims of Planned Parenthood’s sexual abuse cover-up. Hurley said that Planned Parenthood, with its half a billion in tax dollars annually, has a litany of attorneys in its arsenal, which it uses against anyone who dares to challenge the organization in court, even when the case is filed to get justice for victims of rape or sexual assault.

“I will tell you I grossly underestimated what I was getting involved in. I’d been involved in very complex litigation for many years as lead counsel and I thought that would prepare me for litigating against Planned Parenthood. And I was wrong,” Hurley said, adding:

Planned Parenthood, when it is sued, hires the best lawyers in the United States. Planned Parenthood will fund the defense of litigation in a matter that, from what I could tell in our cases, it was limitless…. In both of our cases, Planned Parenthood’s lawyers fought every single issue, every aspect of discovery. Every aspect of the case was litigated. Much more so, in fact, than I had seen in any of the other cases I had been involved in my 35 years. Which, I think, from my perspective — and this is argued throughout our pleadings — was an attempt to make it prohibitively expensive for us to continue.

The majority of the plaintiffs in these cases are very poor people, are people from backgrounds where they don’t have much money. And it’s hard to find lawyers who are willing to spend six years litigating against an organization that is going to require you to devote thousands of hours to litigate those claims. And I think that is something that Planned Parenthood and its lawyers are very good at.

The first case involved a 14-year-old girl who went to Planned Parenthood for an abortion after being impregnated by her 21-year-old soccer coach. According to Hurley’s interview with Live Action News, when the adult predator, John Haller, found out that his minor victim, Chelsea, was pregnant, he understood that “he was going to be in serious trouble if that… was ever disclosed.” So, Haller convinced the teen, in Hurley’s words, to “have an abortion, and told her that that was the only way they could stay together, that he loved her and if she had the abortion they would stay together — and, she thought, would get married.”

But rather than investigate or report suspicion of abuse, Planned Parenthood asked few questions and simply took the word of Haller over the phone that he was the victim’s parent, after Haller instructed the girl to give his number to Planned Parenthood. Then, according to court documents, after the abortion, the abuser resumed having sex with the teen. As a result of a subsequent report made by a teacher, Haller was later found guilty of seven counts of sexual battery.

The second case involved another teen who had been sexually abused by her father since she was 13. When she became pregnant at age 16, the abuser forced her to have an abortion at Planned Parenthood.

The victim, Denise Fairbanks, told Planned Parenthood’s staff that her father was raping her, but instead of reporting the abuse to authorities, Planned Parenthood sent Denise home with the abuser where he continued to assault her for another year and a half. The abuser was stopped only after Denise spoke to her coach — and the coach, not Planned Parenthood, went to law enforcement. 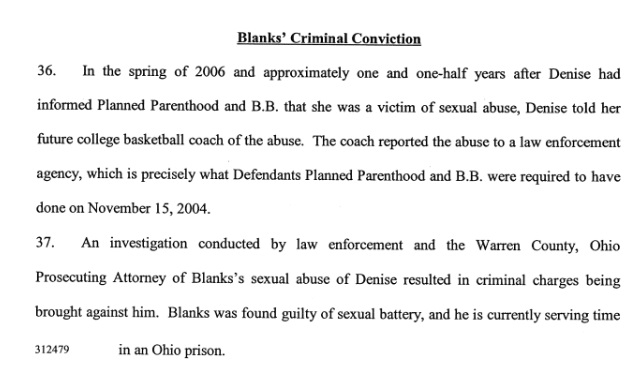 According to Hurley, who also represented Denise in her lawsuit, when the victim was taken to Planned Parenthood…

The Planned Parenthood employee said to her something to the effect, “If you’re going to sleep around you need to get on birth control.”

And Denise was stunned, and she took that as really an insult, that she was being called a whore. And, so, what Denise… said in response was, “This was not supposed to happen, I was forced to do things I didn’t want to do.”

Of Planned Parenthood’s failure to report the sexual abuse being inflicted on this young victim, Hurley told Live Action, “It was clear to me that they had a duty to report suspected abuse. I think known abuse, but, at least suspected abuse. They didn’t. And her father continued to rape her for another year.”

Hurley told Live Action News, “Had they reported Denise’s abuse immediately, the abuse would have stopped…. Unfortunately, it was a year later.”

Hurley also told Live Action News he believes the media has given Planned Parenthood a pass and that, as a result, more sexual abuse will be covered up:

While they’re correct in terms of the way they have handled and exposed or or attempted to expose, the abuse that took place in the Catholic Church up in Michigan State, and now even in the #MeToo movement, I think that’s great. What I find to be hypocritical is the media’s refusal to do a serious investigation of what occurs at Planned Parenthood.

There’s been enough information provided to the press, with Lila Rose for example, when she did her exposés, both with respect to the attempts in those situations, based upon the video I saw, of people at Planned Parenthood coaching girls not to say certain things so they wouldn’t have to report abuse. Also, to the videos that talked about the sex trafficking and the prostitution. Clearly, the mainstream media has decided that they don’t want to expose or do an investigation… to find out what is actually going on at Planned Parenthood.

Hurley added, “[I]f I, as a devout Catholic, would participate in the prosecution of the Catholic Church for what it’s role was in failure to report abuse, then I have no problems trying to expose what Planned Parenthood does and doesn’t do.”

But, as Live Action News has previously documented, Planned Parenthood regularly rewards journalists for their complicity of silence on failing to accurately report their abuses, which include Medicaid fraud, privacy breaches, and a failure to report sexual abuse among others.

The evidence against Planned Parenthood is mounting.

Live Action President and Founder Lila Rose commented, “Without over half a billion dollars a year from taxpayers, it would be much harder for Planned Parenthood to litigate these abuse cases for years until they wore victims down, never formally admitting their cover up of these young girls’ rape. When Planned Parenthood gets taken to court, it’s the taxpayers who are paying for Planned Parenthood’s defense and helping to put these children through years of litigation and prolonging their agony.”

Live Action’s companion video docuseries includes tragic details of criminal and civil cases (many previously in the public record thanks in part to pro-life groups such as Life Dynamics) in which victims were returned to their abusers to be further assaulted. It also contains testimony from former Planned Parenthood staffers, who repeatedly witnessed the organization’s systematic and troubling disregard of mandatory reporting laws. The abortion giant currently receives $60 million from the federal Title X family planning program and hundreds of millions of dollars from Medicaid and other state and federal government money. In 2015, 474 of Planned Parenthood’s nearly 650 facilities were Title X recipients, according to a Guttmacher Institute report. In total, Planned Parenthood receives over half a billion dollars annually in federal and state tax dollars.