Live Action has recently released a powerful docuseries demonstrating Planned Parenthood’s decades long complicity in the cover-up of sexual abuse. An investigative report has also been released, detailing some of the horrific cases covered up by Planned Parenthood, which receives millions in taxpayer dollars annually, including Title X funds. It also reiterates how abortion enables sexual abusers by aiding them in the ability to cover their crimes.

While Planned Parenthood frequently attempts to establish itself as a leading advocate on this critical issue, it is actually one of the biggest accomplices to child sexual abuse in the nation. Despite Planned Parenthood’s public rhetoric as well as state and federal laws requiring it to report suspected abuse, its failure to report has been deliberate and widespread.

Time and again, rather than reporting suspected abuse to authorities, Planned Parenthood has repeatedly looked the other way, performed abortions on victims as young as 12 years old, and then returned those victims into the waiting arms of their abusers. Planned Parenthood’s repeated failure to report such incidents has allowed abusers to continue abusing their victims, often for years.

Live Action acknowledges the contributions of other pro-life groups to the report:

Although Live Action has documented many of Planned Parenthood’s failures and cover-ups, many other groups, such as Alliance Defending Freedom, Life Legal Defense Foundation, Life Dynamics, Americans United for Life, and others, have participated in legal actions or have collected reams of documents from lawsuits, court filings, and regulatory agency reports. Their work has contributed significantly to Live Action’s report.

It then summarizes a few of the lawsuits that have been brought against Planned Parenthood, incident reports from state regulators, as well as criminal cases against abusers who used the organization to cover their crimes. Some of those cases have also been detailed in Live Action’s newly released docuseries, Aiding Abusers:

[T]his report only represents a sampling of the cases that have occurred at Planned Parenthood over the years. Moreover, these are cases that have only come to the attention of authorities because a parent, a friend, or a victim herself came forward. Because many cases of sexual abuse are never reported, no one knows how many victims are actually still suffering at the hands of their abusers.

For clarification, Live Action News’ summaries of the cases (below) may read differently from what has been published in the Congressional report.

Lawsuits against Planned Parenthood for failure to report sexual abuse:

In addition, the report details a 2008 Live Action investigation in which undercover investigators posed as 13-year-old girls impregnated by 31-year-old men, and a 2011 Live Action investigation in which investigators posed as pimps prostituting 14- and 15-year-old girls. In both situations, Planned Parenthood employees were repeatedly caught on camera offering to cover up abuse and help with abortions and getting around parental notification laws.

The report also notes how the abortion corporation lied when it claimed it would retrain staffers, as documented previously by Live Action News here and here.

It then quotes from a lengthy sex trafficking study, reported about previously by Live Action News. The 2014 report, published by the Loyola University Chicago’s Beazley Institute, “The Health Consequences of Sex Trafficking,” highlights how pimps force their victims to get abortions at Planned Parenthood so they can quickly get them back onto the streets. The report notes that survivors had “significant contact with clinical treatment facilities, most commonly Planned Parenthood.” In fact, the organization was the top-most visited facility for trafficking victims, second only to hospital emergency rooms.

One survivor quoted in the report said that the reason she was taken to Planned Parenthood was “because they didn’t ask any questions.” 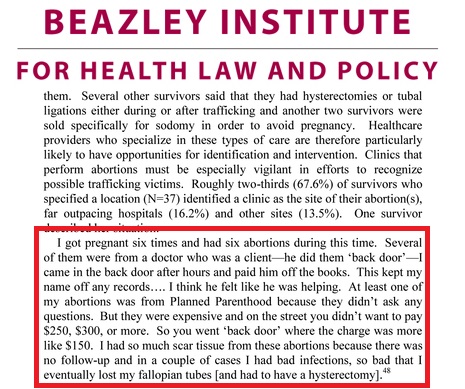 The report points out that Planned Parenthood is one of the largest recipients of federal Title X dollars. As Live Action News has previously documented, all indications are that Title X requires recipients of government dollars to comply with all federal and state laws involving the reporting of sexual abuse. In 2015 alone, 474 of the organization’s facilities received funding from the federal program. Rules recently proposed by HHS seek to enforce this requirement.

The investigative report, which contains information known in the public record, comes as the silence has finally been broken surrounding serial sexual abusers in Hollywood, the media, politics, and elsewhere. Now, it’s time for the silence to finally be broken about the nation’s number one abortion provider, one of the sexual abuser’s favorite accomplices. It’s time for politicians, media and Hollywood to reject Planned Parenthood’s complicity in sexual abuse by aiding abusers.