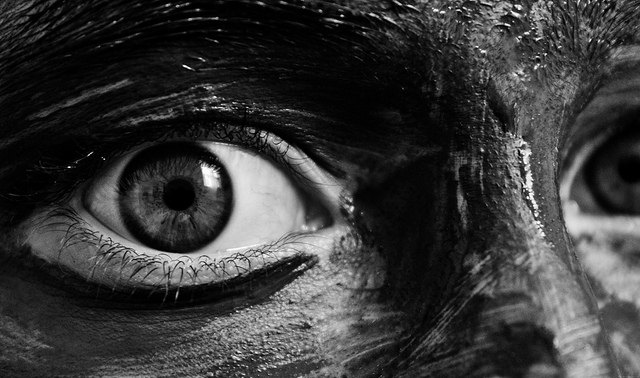 While Planned Parenthood continues to insist that it is all about women’s healthcare, a look at the organization’s failure to report the sexual abuse of underage victims in various states paints an alarming picture of an abortion chain more concerned with its own funding than with the health and care of women and girls.

The information below has been compiled from state and civil documents, online blogs, and reputable websites which source the incidents they detail.

According to the document, in April 2014, a 14 year-old girl (who already had two living children) received an abortion at the Mobile facility — her second in four months. The report reads in part: 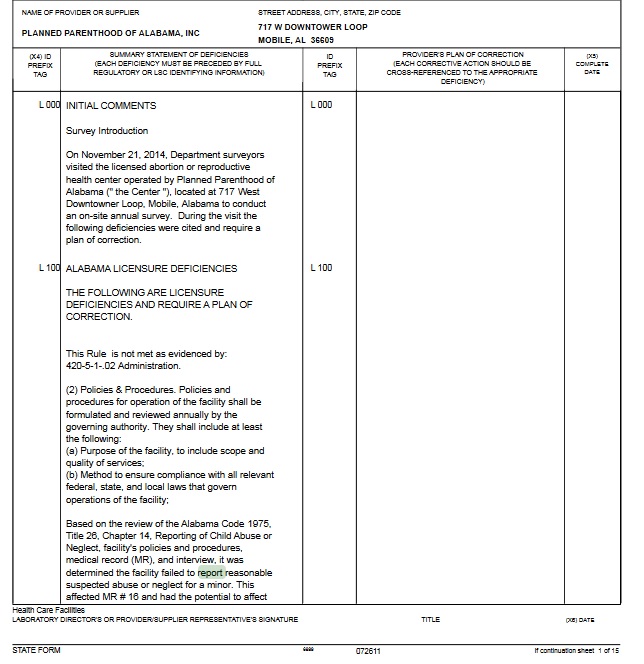 • A 2009 inspection of Planned Parenthood of Alabama in Birmingham revealed a failure to report suspicion of child sexual abuse of a 13-year-old who aborted twice within four months. The Alabama Department of Health documented this shortly after Live Action published an undercover sting documenting how the clinic failed to report child sexual abuse. 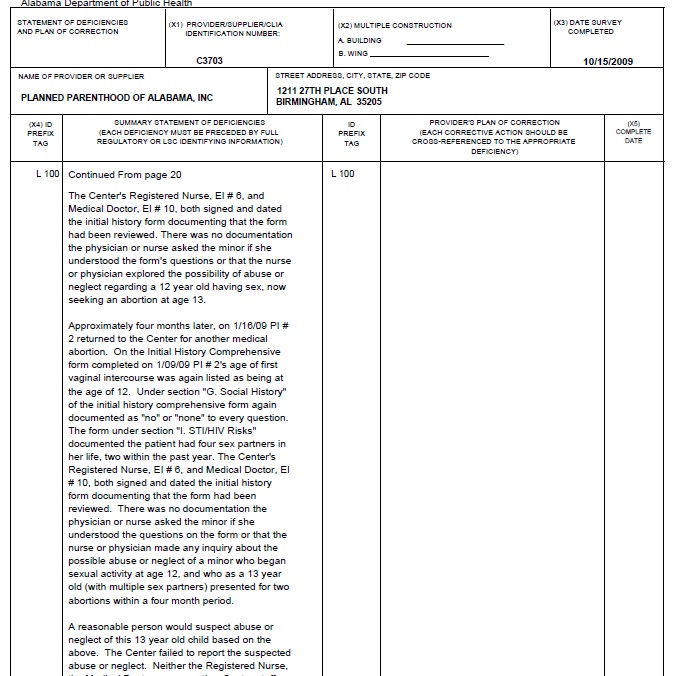 The initial history comprehensive form documented that PI # 2’s age of first vaginal intercourse was at the age of 12. The Initial History and Comprehensive form…documented that PI # 2 had three sex partners in the past year… There was no documentation the physician or nurse asked the minor if she understood the form’s questions or that the nurse or physician explored the possibility of abuse or neglect regarding a 12 year old having sex, now seeking an abortion at age 13.

Approximately four months later, on 1/16/09 PI # 2 returned to the Center for another medical abortion… There was no documentation the physician or nurse asked the minor if she understood the questions on the form or that the nurse or physician made any inquiry about the possible abuse or neglect of a minor who began sexual activity at age 12, and who as a 13 year old (with multiple sex partners) presented for two abortions within a four month period.

• In 2014, a Planned Parenthood counselor “intentionally miscoded” a sexual assault report as a “consensual encounter” to avoid reporting the incident to police, according to a report by the Pinal County Sheriff’s Office. 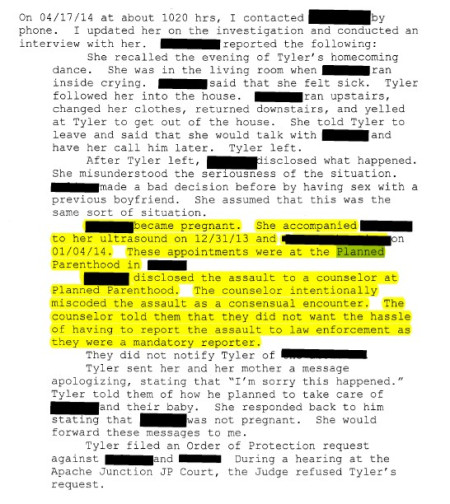 The 15-year-old victim allegedly became pregnant from a rape perpetrated by 18-year-old Tyler Kost and sought an abortion at a Tempe Planned Parenthood. According to reports, the Planned Parenthood counselor told her and her mother that it “wasn’t worth the hassle” to report the rape. If Planned Parenthood workers had reported the alleged assault in December, it could have jump-started a sheriff’s investigation into Kost months before he allegedly assaulted other teens at his school, court documents say. Pinal County criminally charged Kost with 27 counts of sexual assault and abuse.

• Grey David Woods‘ victim was the 12-year-old daughter of a girlfriend he eventually moved in with. Woods physically abused and photographed the child, and had daily sexual intercourse with her. (Tragically, her own mother participated in the abuse.) Planned Parenthood’s apparent failure to report this as suspected abuse led to the child’s further victimization. She is referred to by the initials C.C. in the court document, which states:

In the fall of 2010, C.C., who was 15 years old, learned that she was pregnant. Woods and A.C. told her to get an abortion. In mid-January 2011, A.C. drove C.C. to a Planned Parenthood facility to undergo an abortion procedure. A.C. told the staff at Planned Parenthood that an unnamed boy had gotten C.C. pregnant. C.C. did not tell the truth about what happened because she was concerned that she would get in trouble, and/or that her mother would get in trouble. Less than two weeks after C.C. had the abortion, Wood resumed having sex with her.

It wasn’t until the summer of 2012 when police were alerted to the sexual abuse — almost two years after the child’s abortion at Planned Parenthood.

• 39-year-old Gary Wendall Cross was tried for sexual misconduct after his 13-year-old stepdaughter became pregnant and had an abortion. Court documents show that Planned Parenthood referred the victim (listed as “K”) to a hospital, but apparently did not report suspicion of the abuse:

Due to the fact that the assaults continued for several more months until the victim’s mother found paperwork about the abortion and contacted police, it appears Planned Parenthood did not report suspected abuse.

• In 1980, 61-year-old swim coach, Andrew Asa King, victimized a 14-year-old student, who was then taken to Planned Parenthood for an abortion. According to research published at ChildPredators.com, the assault remained hidden until 2009 when swimmers who had been coached by King connected through Facebook and began discussing the sexual abuse they had endured. After one victim went to the authorities, an investigation uncovered that King had engaged in sexual relations with dozens of his female students, aged 10 to 17, starting in 1978. If Planned Parenthood had reported suspicion of abuse, these additional victims may have been protected.

• In 2001, Dwayne Bruce Lee suspected his underage victim was pregnant and took her to Planned Parenthood for a pregnancy test. The victim was then taken by her abuser to another abortion clinic for the procedure. According to court documents, the victim continued to be abused by Lee until she finally contacted the police in 2006.

• 32-year-old John P. Lenihan ordered his 16-year-old victim to have an abortion after she became pregnant. He then took her to a Planned Parenthood for the procedure. The case was highlighted at ChildPredators.com, which points out that since the abuse continued after the abortion and did not come to light for several years, it is clear Planned Parenthood did not file a report.

• In June 2012, Edgar Ramirez was given life without the possibility of parole after he was convicted of attempted murder, committing a lewd act on a child under age 15, possession of obscene matter depicting a minor, and two counts of continuous sexual abuse of a minor under age 14. According to court documents, his victim was taken to Planned Parenthood several times and there was no indication they contacted authorities for possible abuse. A summary of the incidents is listed below:

Although the court document does not say who took the teen to Planned Parenthood, we know she went back into the care of Ramirez, who resumed having sex with her a “couple of days later,” the document states.

Planned Parenthood abortion #2: During the last weeks of October that same year, court records indicate that Ramirez again got K.R. pregnant and on December 8, 2010, the child was taken to Planned Parenthood for another abortion at six weeks of pregnancy. After the abortion, the Planned Parenthood doctor implanted an IUD to prevent additional pregnancies, the document states.

Ramirez was finally arrested March 16, 2011, months after the child’s second abortion — and only after the victim’s older sister, who had also been sexually abused, reported his conduct to the police. There is no indication that Planned Parenthood reported any suspicion of abuse to authorities, even after performing two abortions on the victim.

Stay tuned for part two of a listing of states where Planned Parenthood failed to report child sexual abuse.