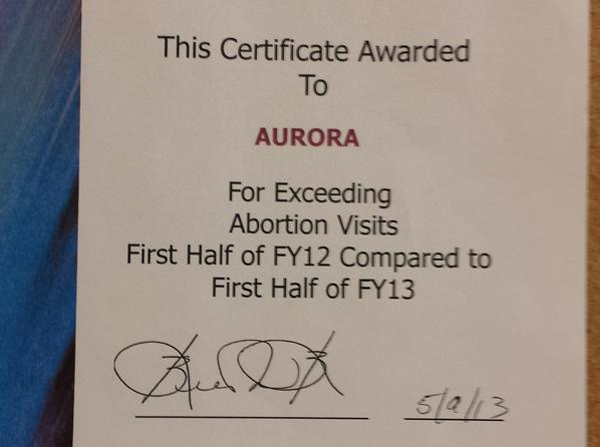 On February 8, 2017, President and Founder of Live Action, Lila Rose, posted a photo of a certificate awarded to a Colorado Planned Parenthood for exceeding abortion quotas.

The certificate, “For Exceeding Abortion Visits,” was awarded to the Aurora Planned Parenthood facility back in May of 2013, but still stirs up controversy four years later. Live Action received emails and Facebook comments after Rose’s post, questioning the validity of the award. Some claimed the photo was doctored or photo-shopped.

However, Planned Parenthood itself admitted to the validity of the award in a blog post from July 2014. Speaking of pro-life claims that Planned Parenthood had abortion quotas, Vicki Cowart, President and CEO of Planned Parenthood of the Rocky Mountains (PPRM), responded that the photo was of a certificate that PPRM had given to one of its clinics:

The entire basis of their claim was a photo of a certificate that Planned Parenthood of the Rocky Mountains gave to a health center for increasing its abortion services. … And, yes, we absolutely do celebrate our progress in ensuring that more people have access to the full range of reproductive health care, including abortion. And we always will. 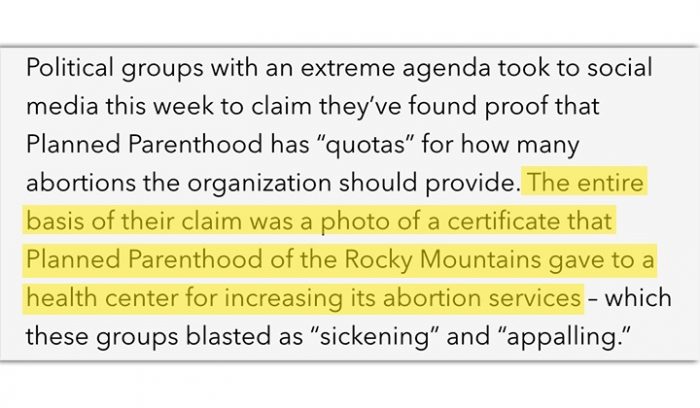 Abby Johnson, Founder and President of And Then There Were None and a former Planned Parenthood clinic director, posted the same image of the award to her Facebook page.

“So remember when I posted this photo that we received from a former Planned Parenthood worker? And remember that we said that this was an award for increasing their abortion numbers at the Aurora abortion clinic?” Johnson wrote. “Well, Planned Parenthood has responded and has confirmed that, YES, this is an award that was given out by them. And, YES, they will continue to ‘celebrate their progress and they always will.’”

Even though Planed Parenthood acknowledged the authenticity of the certificate awarded to one its affiliates for achieving abortion quotas, PPRM’s Cowart still denied having abortion “quotas.”

“Every center had a goal for how many abortions were done, so we were very goal-oriented,” Sue Thayer, a former Planned Parenthood manager, said. “I trained my staff the way that I was trained, which was to really encourage women to choose abortion, to have it at Planned Parenthood, because that counts – you know – towards our goal.”