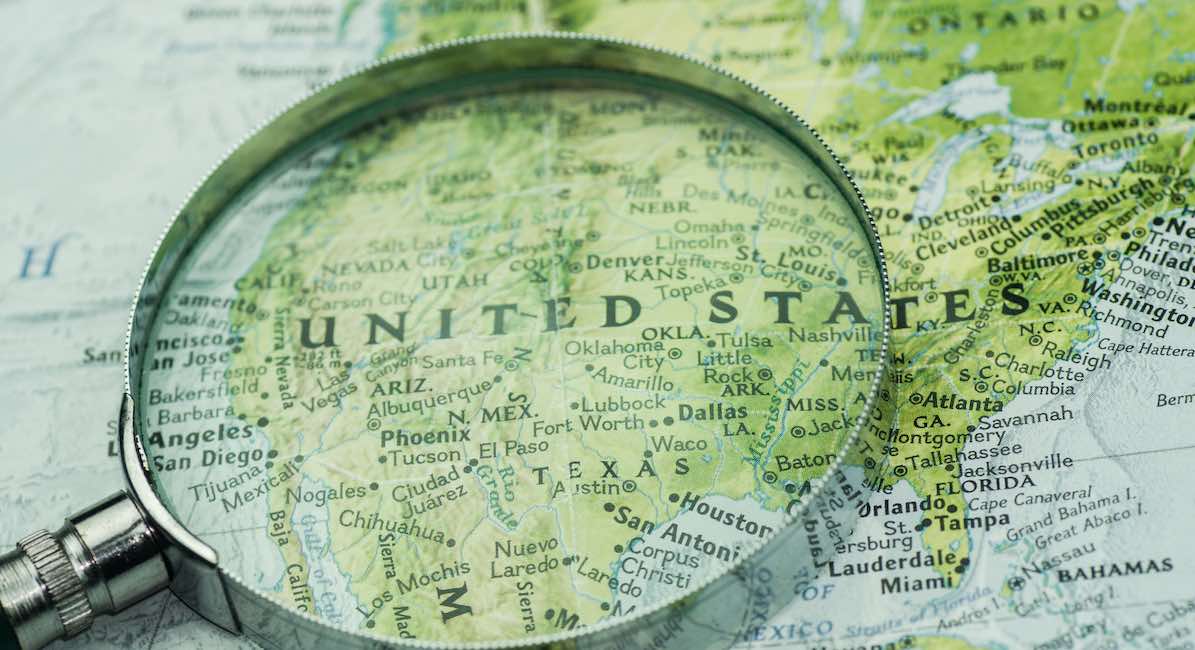 Planned Parenthood’s former research arm and “special affiliate,” the Guttmacher Institute, has released a report scoring all 50 states on whether they were “hostile” or “supportive” of “abortion rights” in 2020. The report concluded that just 16 out of 50 states were “supportive.” While these ratings call into question Guttmacher’s methodology, the analysis reveals how extreme Guttmacher’s abortion position is and how truly opposed the organization is toward any efforts to restrict or regulate abortion.

Government agencies, media outlets, and political entities who use Guttmacher’s research should be aware that this organization is in no way unbiased on the subject of abortion. 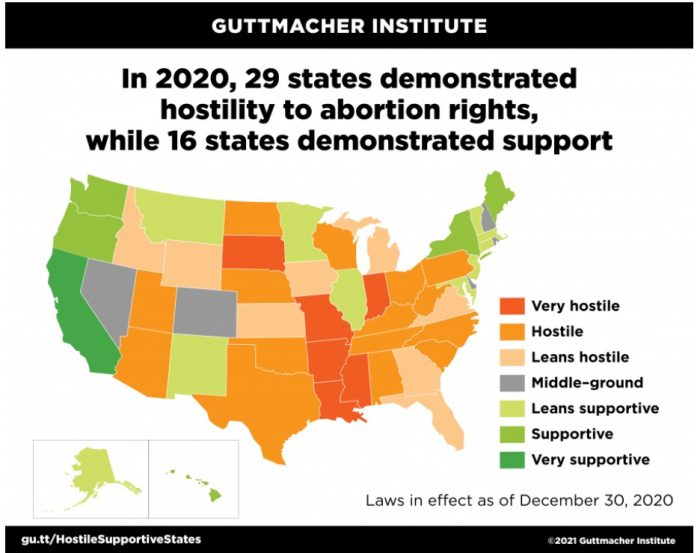 What does Guttmacher consider to be a “hostile” abortion measure?

Guttmacher sees as “hostile” any measure that would ban the violent dismembering of a preborn child, even those likely to be viable outside the womb.

According to Guttmacher’s latest report (2017) there were an estimated 100,000 (100,891) abortions which took place in the second trimester or later that year. Guttmacher does not reveal how many of these later abortions are committed, merely lumping together all later abortion under the category of “21 weeks or greater.”

The abortion industry is not truly concerned for women’s safety (even though women do die from legal abortion), but frequently functions in the fashion of an assembly line, rushing women through abortion procedures. In an effort to reduce overhead costs while increasing profits, the industry is continually seeking to eliminate any health or safety requirements.

The industry offers little legitimate health care, instead focusing selling abortions (read here about abortion quotas) and hiding the truth about fetal development from prospective customers in an attempt to make the sale as quickly as possible.

Abortion has been declining throughout the US for years, resulting in the closure of multiple abortion facilities.

To compensate for this loss of abortion revenue, the abortion lobby, including Planned Parenthood and the Guttmacher Institute, are seeking to do away with the federal Hyde Amendment, which prohibits federal dollars from funding most abortions.

As such, it is no surprise that Guttmacher would characterize states that prohibit taxpayer-funded abortion as “hostile to abortion rights” — after all, its own data reveals that when abortions are taxpayer-funded, more abortions take place. This is a boon for the abortion industry, including Guttmacher, which is funded by groups which profit from abortion.

In 2014, Guttmacher reported, “Medicaid was the second-most-common method of payment and was reported by 24% of abortion patients.” In addition, the 2014 data also found that almost half (45%) of US abortion patients had at least one previous abortion. In addition, patients who paid for their abortions with their own funds were less likely to have had a prior abortion than those who used health insurance or received financial assistance.

A survey published by Guttmacher in 2017 revealed that women who have taxpayer-funded abortions tend to have more abortions — and most were using contraception when they became pregnant.

4. Restricting expansion of the abortion pill via telemedicine

The abortion industry has long planned to expand use of the abortion pill. It has filed — and won — lawsuits to restrict the Food and Drug Administration (FDA) from enforcing reasonable in-person requirements under a safety system called REMS during the COVID-19 pandemic. REMS only affects a limited number of drugs deemed to have “serious safety concerns,” protecting women. Despite previous lawsuits won by the abortion industry, the US Supreme Court recently reinstated the FDA’s abortion pill safety protocols.

Live Action’s investigative report on the abortion pill documented how the abortion industry has increased its push for DIY, at-home abortions by using TelAbortion, virtual websites, and pharmacy distribution. Since the start of the COVID-19 pandemic, virtual abortion pill dispensaries have flooded the online marketplace in an attempt to profit from abortion pill sales, estimated to gross nearly $200 million annually.

The industry recently endorsed a so-called “no test” abortion pill protocol, which flouts the FDA’s safety protocols and was planned well before the pandemic. A “no-test” or de-medicalized abortion pill protocol enables abortion facilities to maximize profits by dispensing abortion pills without conducting any in-person examinations, testing, labs, or ultrasounds to determine gestational age and rule out life-threatening ectopic pregnancies, potentially placing women’s lives at greater risk. Even costs for the disposal of fetal remains are eliminated, as women are instructed to simply flush their babies down the toilet.

The abortion pill, which comprises 40% of all reported abortions annually, has ended the lives of about four million preborn human beings, has killed dozens of women, and has sent thousands to the hospital with serious complications.

Categorizing parental consent/notification legislation as “hostile” is possibly one of the most extreme positions Guttmacher can take. Live Action News has not only documented the dangers of abortion but has repeatedly documented the industry’s unwillingness to protect girls from child sexual abusers.

Guttmacher views every abortion regulation or restriction as “unnecessary,” even if the same protective measure applies to medical offices, surgical facilities, or hospitals. The abortion industry wants to operate with as little accountability as possible.

Even Planned Parenthood’s own abortion consent form makes it clear that “[n]o promise can be made about the outcome of your abortion. In the unlikely event that you need emergency medical care that cannot be provided at Planned Parenthood, you will be responsible for paying for it. This is the case even if Planned Parenthood sends you to a hospital because of a problem.”

How does Guttmacher define “supportive” states?

Any state demonstrating one of Guttmacher’s six “protective policies” received a positive mark. States with any “abortion restrictions” received negative marks. The positive and negative marks were then tallied together for the final count.

California ranked highest (6) as “very supportive” of protecting abortion, while Hawaii, Maine, New York, Oregon, and Washington ranked “supportive” of abortion with a count of four. 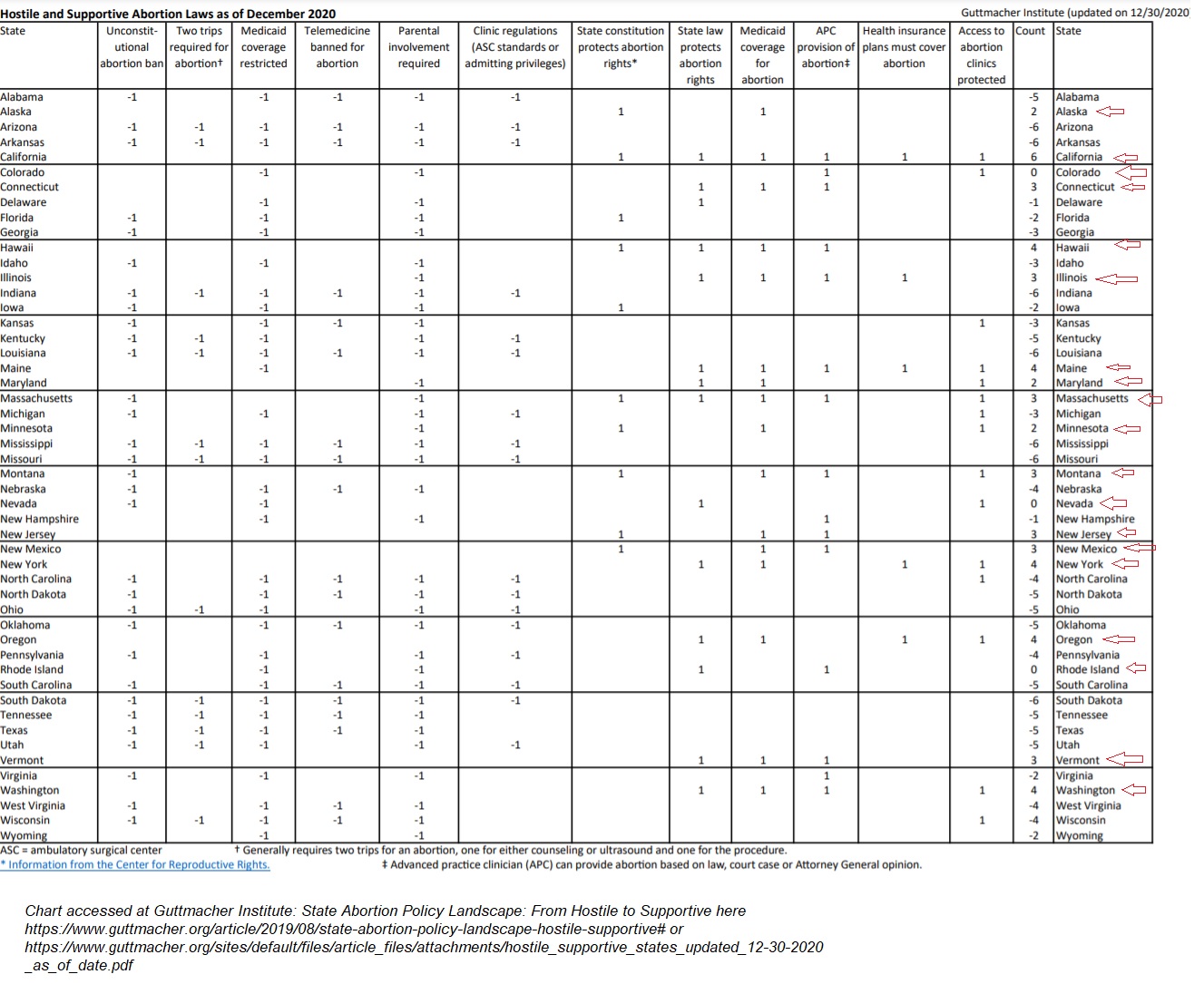 Illinois, Massachusetts, Connecticut, Montana, New Jersey, New Mexico, and Vermont received counts of three, while Alaska, Maryland, and Minnesota received a count of two, ranking all as “leaning supportive” to abortion despite many working to codify abortion on demand. Because a negative measure subtracted from a positive measure, states like Colorado and Rhode Island (for example) received a count of zero.

Abortion is the violent targeting for death of a living preborn child. Hopefully, even more states will see this truth and pass pro-life legislation in 2021 to save lives.