When abortion bans are in the news, the usual scare tactic claimed by abortion supporters is that when abortion is illegal, thousands of women die. They typically point to entirely fabricated numbers of women who died from illegal abortions just prior to Roe v. Wade, citing a debunked statistic of between 5,000 and 10,000 annually. A more recently cited number claiming “thousands of women [are] dying from abortion every year,” dates all the way back to the 1940’s — before antibiotics were invented. These inflated numbers were created intentionally to garner sympathy for decriminalizing abortion.

1. Hundreds of thousands of women did not die from illegal abortions annually

2. Abortion death numbers were purposely inflated to scare politicians and manipulate the public 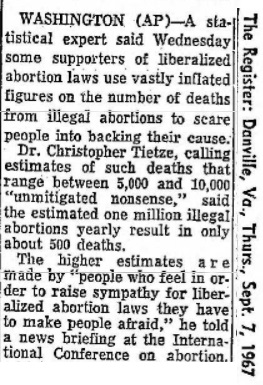 Live Action News previously documented that while legalizing abortion resulted in a drastic increase in abortions, it did not necessarily equate to safer abortions, especially in the first few years after Roe was decided. Even today, women are injured and killed after seeking legal abortions.

4. No one knew exact illegal abortion death numbers, but acknowledged that numbers were inflated

Today, although the CDC reports legal abortion deaths, many believe they could be under-reported. Years ago, I was personally told by a medical examiner “off the record” that abortion deaths are “covered up regularly.”

The Guttmacher Institute writes that by 1950, “just over 300” women died from illegal abortion, adding that it was most likely “because of the introduction of antibiotics in the 1940s, which permitted more effective treatment of the infections that frequently developed after illegal abortion.”

Mary S. Calderone, medical director of Planned Parenthood, 1959: “Whatever trouble arises usually comes after self-induced abortions, which comprise approximately 8 per cent, or with the very small percentage that go to some kind of nonmedical abortionist.”

Mary S. Calderone, medical director of Planned Parenthood, 1959: “Another corollary fact: physicians of impeccable standing are referring their patients for these illegal abortions to the colleagues whom they know are willing to perform them…”

9. Illegal abortions were often classified as “therapeutic” (to save a woman’s life) so they could be done by doctors:

Mary S. Calderone, medical director of Planned Parenthood, 1959: “What we have to admit is, as was repeatedly emphasized, that most therapeutic abortions are in the strictest sense of the law actually illegal.”

Read Part One of this “Don’t be fooled” series here.