Planned Parenthood’s former “special affiliate” The Guttmacher Institute has released their latest annual report revealing that they received over one million dollars from American taxpayers, slightly more than they received in 2015. Guttmacher Institute has been fighting every effort to defund abortion corporation Planned Parenthood and some would say they have good reasons to keep those millions of tax dollars flowing in.

In addition to US Funds, The Guttmacher Institute received over $12 million from foreign governments as well.

In addition to the taxpayer, The Guttmacher Institute received over $7 million from several pro-abortion organizations including:

The Guttmacher Institute has defended Planned Parenthood’s over $500 million dollars of tax payer funding annually. While the organization claims defunding Planned Parenthood would cause millions of women to lose health services, a review of the data by Live Action News reveal that this simply is not the case.  The fact is that Federally Qualified Health Centers (FQHC) offer a broader array of primary care services and can assist far more patients than Planned Parenthood currently does now.

After all, Planned Parenthood has lost more than half a million patients (600,000) since 2011, while taxpayer-funded health centers, as identified by the federal Health Resources and Services Administration (HRSA), saw a 2 million patient increase by 2015, providing care to 24,295,946 patients.

Live Action News has documented that Planned Parenthood, which masquerades as a health care provider, is actually decreasing the number of services that it offers women. When comparing Planned Parenthood’s services to FQHC sites you see that defunding this abortion corporation will have little effect on women in particular.

Despite these numbers, Live Action News has documented that politicians and media alike repeat Planned Parenthood’s talking points. And, one of the biggest venues for publishing those talking points comes directly from The Guttmacher Institute.

The fact is that no matter how many “reports” Guttmacher authors about Planned Parenthood it is far from independent in its history with the organization.

Today, it is rarely mentioned. Why?

Then, there is that pesky little fact that Planned Parenthood, while getting millions in tax payer revenues, did at one time, send donations to The Guttmacher Institute. But, not to worry, those dollars never influenced the “research” organization, right? 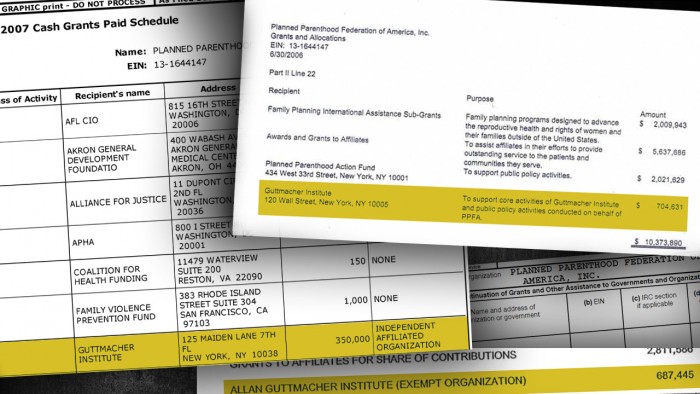 Ryan Bomberger of The Radiance Foundation found evidence that in its 2007 tax filing, Planned Parenthood still listed Guttmacher as an “independent affiliated organization” (emphasis mine) which was receiving money from the abortion giant. Bomberger wrote, “Planned Parenthood […] gave $2,142,076 of our tax dollars to their ‘research’ arm, Guttmacher.”

Yet, on their website, Guttmacher claimed that in 2007, their “special affiliation” status with PPFA was terminated.

Lest you think the charity only went one way, don’t. In fact, the so-called independent research organization the Guttmacher Institute also gave millions of dollars to Planned Parenthood. Planned Parenthood’s own annual reports show the massive amount:

Reports after 2005 stop listing Guttmacher, but they do list “private contributions” and “other operating revenue” which they do not break down into detail.

For this reason, the American taxpayer deserves to know that Guttmacher has been funded by the taxpayer for years. So, Live Action News has assembled a list of those dollars from the organization’s annual reports:

The Guttmacher Institute is not unbiased when it comes to research on Planned Parenthood, and the media knows this. Now, perhaps the tax payer will as well and Congress will finally move to defund them both.