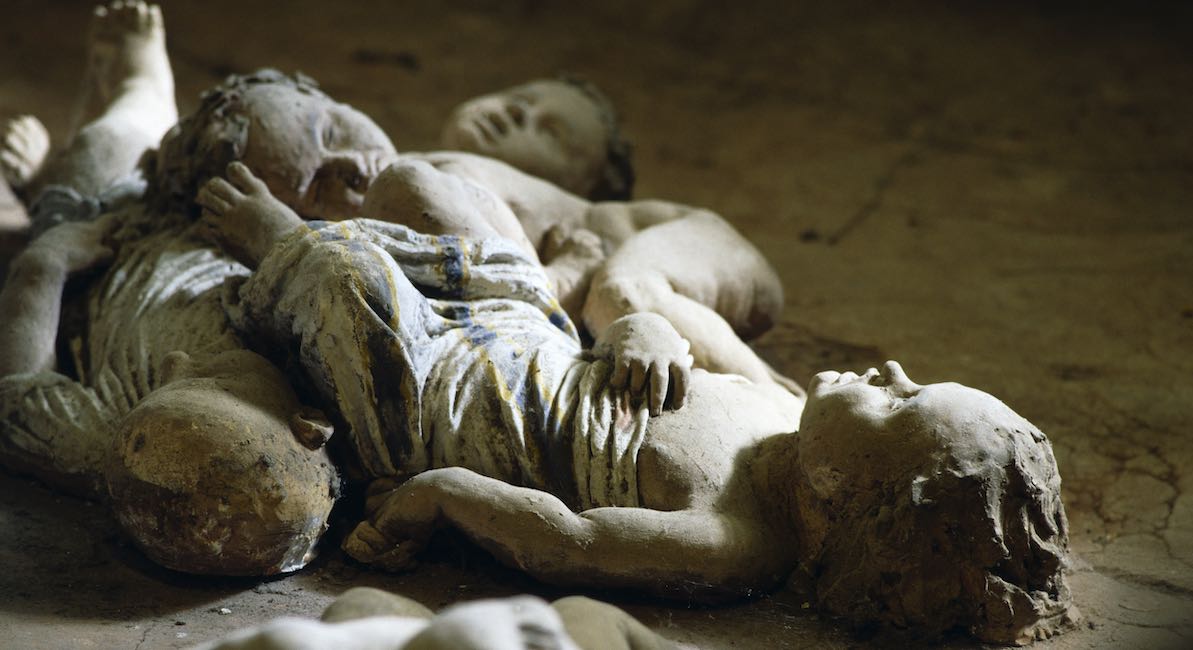 On December 28, Catholics celebrate the Feast of the Holy Innocents in remembrance of the children slaughtered by King Herod in his quest to kill the newborn Jesus. A king who feared losing his power, Herod had already killed anyone he saw as a threat, including three of his own sons. When he learned about the Christ Child, he set a plan in motion to ensure Jesus didn’t live to take his throne, either. When the Magi, having been warned in a dream not to tell Herod where Jesus was, failed to return to Herod as he had instructed them to, Herod had every little boy age two and under in Bethlehem killed. He deduced that if Jesus was indeed in Bethlehem, his death would be guaranteed through this brutal act.

Herod isn’t the only political figure of the past to order the mass killing of innocent children because he feared losing his power. Afraid that the Israelites would become “too numerous,” Egypt’s Pharaoh came up with a plan to secure his power: control the population of the people he didn’t want reproducing. He ordered that all Hebrew baby boys must be thrown into the Nile River.

With their twisted desire for power, Herod and Pharaoh have something in common with politicians of our day. A mass slaughtering of innocents is happening today in the United States, where 2,363 babies are killed daily through abortion. Many politicians, including some who claim to care about the most vulnerable of society, will stop at nothing to keep their political power. To do this, they allow and even promote the genocide of innocent preborn children.

Each election year, the abortion industry ups the ante for the politicians it feeds from its pocketbook. Planned Parenthood, for example, is a powerful organization with $45 million to burn in campaign spending to help abortion-friendly politicians get elected. Because of this, the pro-abortion agenda in America has evolved from a “safe, legal, rare” and difficult decision to a whenever-wherever-whoever, free of charge, celebrated “right.” The end goal is abortion with no restrictions, paid for by American taxpayers.

Planned Parenthood, which committed a record 345,672 abortions in 2018 despite an overall national decline in abortions, has deep pockets — $1.6 billion in revenue in 2018, $2 billion in assets, and $45 million to spend on the 2020 election. Power-hungry politicians who are funded by Planned Parenthood and who want to ensure they retain a hold on their Congressional “thrones,” so to speak, must bend to the will of Planned Parenthood or risk losing it all.

Like Herod and Pharaoh, these politicians believe that in order to secure and maintain their political futures, they must allow innocent children to die.

The fight over the pro-life Hyde Amendment is just one example of how the abortion industry holds power-hungry politicians in the palm of its hands. The Hyde Amendment is a rider to the federal budget first introduced by Illinois Congressman Henry Hyde in 1976. It prevents taxpayer dollars from being used to pay for abortion through the federal Medicaid program. It has been added to every appropriations bill since 1976, and every single president — including pro-abortion presidents Bill Clinton and Barack Obama — has signed and accepted it. It has saved 2.4 million lives from abortion, and that is why the abortion industry wants it gone. Fewer abortions mean fewer profits.

At the start of the 2020 presidential election cycle, every single Democratic candidate came out against the Hyde Amendment, even one who had previously stood in favor of it: Joe Biden. On June 5, 2019, Biden supported the Hyde Amendment… yet in a whiplash move, the very next day after Planned Parenthood criticized him for it, Biden decided he opposed Hyde. For Biden (and countless other politicians), the brutal killing of innocent children equals retained political power and status. Planned Parenthood officially endorsed Biden for president on June 15, 2020.

Today, Planned Parenthood’s surgical abortion facilities are disproportionately located in minority neighborhoods, with reportedly 86% of these facilities located in or near communities of color. Though Black people account for just 13% of the nation’s population, Black women account for 36% of all abortions in the US, and are five times more likely to have an abortion than white women. Planned Parenthood founder Margaret Sanger believed that certain populations should not reproduce, and said in reference to her plan to influence and infiltrate the Black community with her birth control agenda, “We don’t want the word to go out that we want to exterminate the Negro population…”

Planned Parenthood has continued Sanger’s legacy with help from legalized abortion. Pro-abortion politicians are aiding in these efforts to reduce the population of minorities and underprivileged Americans by pushing far beyond legalized abortion to taxpayer-funded abortion. But according to a 2017 Marist poll, even the poorest of Americans don’t want the government to pay for them to kill their children. Americans with lower incomes were less likely than those with higher incomes to support government funding of abortions through Medicaid. In addition, a Harvard poll found that support for taxpayer funding of abortion is nearly twice as high among voters who make more than $75,000 a year as those who earn $25,000 or less. This is a red flag, showing that government-funded abortion is discriminatory by nature.

Even Late Supreme Court Justice Ruth Bader Ginsburg admitted that she believed the Supreme Court legalized abortion in Roe v. Wade with a eugenic motive. “There was concern about population growth and particularly growth in the populations that we don’t want to have too many of,” she said in regard to the Hyde Amendment and the Supreme Court’s 1980 decision to uphold it in Harris v. McRae. Opponents of Hyde claim it is racist and discriminatory, but the opposite is true. When asked by a Congressional subcommittee if she believes the Hyde Amendment is racist, pro-life advocate Christina Bennett explained:

With the addition of three conservative justices to the Supreme Court in the last four years, the abortion industry and abortion-friendly politicians are terrified that Roe v. Wade will be overturned. They are scrambling to codify abortion into state constitutions as a right, because, like Herod and Pharaoh, they feel threatened. New York expanded abortion, Massachusetts and Vermont are in the process of codifying extreme abortion laws, and more states will follow. Why? Because pro-abortion politicians fear losing their power if they don’t bend to the will of the abortion industry and allow innocent children to be slaughtered. Even those who call themselves ‘personally pro-life’ as Biden has, will allow these horrific deaths to continue to save their own political futures.

Now that Biden is set to take office as president in 2021, Planned Parenthood has already issued its “day one” demands of him and his administration. Alexis McGill Johnson, president of Planned Parenthood, told Newsweek, “The first thing we would like to see would be an executive order on day one, within the first 100 days, that demonstrates the administration’s commitment to sexual and reproductive health care.” Planned Parenthood will stop at nothing to control the politicians it owns.

The majority of women who have had abortions and sought post-abortion care admitted they did so under pressure. Like the mothers who watched powerless as Herod’s and Pharaoh’s brutal orders were carried out, these women are haunted by the deaths of their children — but for different reasons.

The pain and injustice of abortion may never end while politicians are afraid to stand for life against the profitable abortion industry and risk losing their own political status to save the innocent.

Editor’s Note 1/26/2021: An earlier version of this article included in error in dates regarding Planned Parenthood’s endorsement of Joe Biden for president.