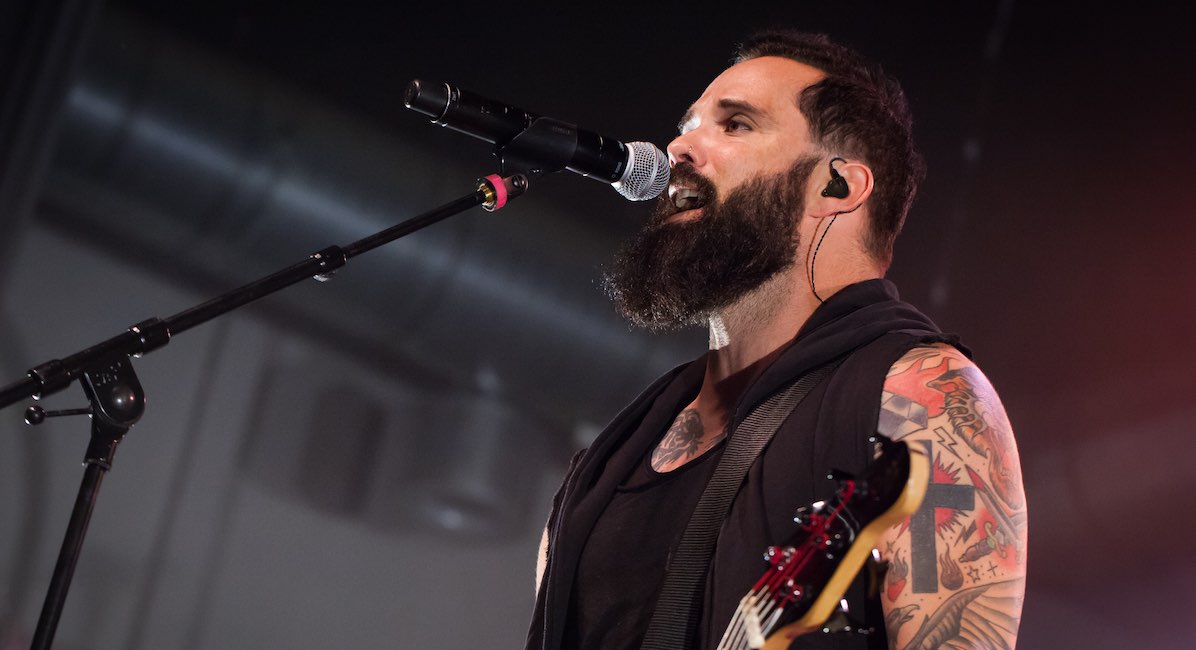 John Cooper, lead singer for the popular Christian hard rock band, Skillet, recently discussed his frustration with Christian leaders who seem to be downplaying the issue of killing innocent children through abortion in comparison to other societal issues. On Cooper’s hour-long September 21st episode of his video podcast, “Cooper Stuff,” he noted, “You can’t start from a wrong foundation and end up somewhere you want to be.”

Cooper played a clip from a show featuring Veggie Tales co-creator Phil Vischer in which Vischer’s female guest discussed her belief that God cares equally about the needs of a pregnant woman and her preborn child. While Cooper noted that, certainly, God cares about both, there is one innocent party in the circumstance of abortion who stands to lose much more than the woman:

READ: “Lucy” – a heartbreaking tribute to a daughter lost to abortion

Cooper also debunked the idea that pro-lifers don’t care about the needs of mothers as well as babies. “Pro-life organizations give lots of help to moms… The only people that say that pro-life people don’t care about the needs of the mother are liberal people,” says Cooper, “and they believe that because they believe that if a woman does not have bodily autonomy — that she doesn’t have the right to have an abortion — then they believe you are literally ripping [their] rights away… treating [them] like less than an individual…. If taxes don’t pay for those abortions, then [they believe] it actually is economic injustice….”

The seriousness of sexual immorality and abortion

Cooper said that sometimes the Church “ranks” sins, and that in doing so, diminishes the seriousness of all sin. The solution to this, he said, is not to diminish certain sins (like abortion), but to take all sin seriously “so every one realizes how undeserving of His favor… we really are.”

Cooper expressed disbelief that some Christians like Vischer’s guest would diminish the seriousness of the deaths of “800,000 babies a year” and those who grieve this human injustice. “800,000 babies a year… it’s ‘Crotch Christianity,’ guys,” Cooper mocked. “You should care about everything in the world, guys… why are you so worried… when there are people with no health insurance…? That’s what they’re saying.”

Cooper then noted how in the Old Testament, penalties for sexual sins and murder were much more serious than penalties for other sins. “Should we find out how God feels about the penalty for murder versus the penalty for not helping the poor? One of those things has a capital offense. One of those things you lose your life for… What about sexual immorality? Does that really matter to God? Yep, that’s a capital offense too. What about sacrificing your children to a pagan god? (Is that anything like killing the unborn…?) That’s a capital offense. Guess what you don’t get [the death penalty] for [in the Old Testament]? You don’t get that for not helping the poor… [or] because you didn’t give health insurance to somebody.”

“I think a nation that takes the most innocent, most vulnerable people in the whole world — which is the unborn — and just says, ‘You can do whatever you want to in the name of bodily autonomy. We’re gonna show women how much we love ‘em by allowing them to commit genocide against the unborn’ — now, that might get you destruction,” Cooper said, speaking of his belief that God will judge a nation harshly for the killing of preborn human beings.

“One of the things that obviously needs to be mentioned is that this week, we have all of the new Christian liberal propaganda… happening in the same week that a Supreme Court justice… just died…. So It’s kind of an interesting thing to see all of this liberal Christian propaganda coming out saying, ‘Justices can’t really do anything anyway, guys, it’s kind of a waste of time…’ [Abortion supporters] are losing their minds over this… obviously the Left thinks it’s a real big deal,” he said, because they are claiming that women’s rights could be “stripped away forever.”

Cooper added, “If there’s nothing to see here, then why are they freaking out?… If Supreme Court justices don’t matter and can’t do anything anyway, then that’s news to everybody.”

Cooper also addressed video remarks made by Phil Vischer — and it is unclear from the clip whether Vischer is quoting from someone else or if the thoughts are his own — who stated, “Everything we’ve been fighting for in terms of presidents and justices [in overturning Roe v. Wade] may ultimately have the ability to only do 10% of the impact that we want.”

The “bigger issue” in a statement like this downplaying the importance of overturning Roe, said Cooper, is that the “10%” of children saved from abortion equates to a lot of human beings. “That’s like 80,000 lives a year,” Cooper emphasized, noting that people who fight on behalf of preborn children would likely see the saving of tens of thousands of human lives each year as something to be celebrated. “As if 80,000 babies a year isn’t a lot.”

Cooper pointed out that we are in the midst of a culture that is “actively trying to broaden” abortion and wants “the government to pay for it,” adding that “within that idea there is a movement to normalize” abortion as well. “We are sitting in a culture that is… willing to really go way over the line to do this,” he said, noting that even as this occurs, some Christians are blindly giving aid to it.

He noted that despite claims to the contrary, some women do not believe the abortion decision is “difficult.” He demonstrated his point by juxtaposing various video clips of women normalizing and celebrating their abortions with a video clip in which Phil Vischer repeats the claim that “no woman wants to have an abortion.”

Cooper is disheartened by the efforts of those whom he calls “liberal Christians” to ignore and even excuse abortion. “If abortion is murder,” he says, “then this is a legal issue… Then comes the push to say, well, this is just about people who make it too much about sexuality… Then comes the push that says, ‘Guys, conservative justices don’t even matter anyway’… Then comes the ‘Guys, you don’t understand… [abortion] isn’t what people want’… but it’s very clear there is a normalization [of abortion] happening in our culture.”

Cooper then addressed recent comments made by well-known pastor Tim Keller, who appeared to downplay the need for Christians to vote pro-life. “It’s not like the Left wants to end [abortion] too and we just have different idea of how to do it,” Cooper noted. “That argument works with the poor, that argument works with the economy… [but] the Left has no plan on how to end abortion. That’s not what they want. They want to expand abortion… [and] believe that [any restriction on abortion] is an abuse against women.”

Protecting the innocent is what the government should be doing, noted Cooper. “The new modern liberal Christian view… [says]… let’s [not] go to the government… let’s work on [abortion] as a heart issue, even though the Bible says that [protecting human life] is the role of the government — but then they flip the script when it comes to social justice issues that the Bible says is charity that the Church is supposed to do….”

“I don’t know why [Christians] would try to minimize [abortion] in any way, and I don’t know why our Bible theologians would go to such great lengths” to emphasize social justice while “minimiz[ing] the abortion issue,” stated Cooper.

It is Cooper’s belief that Christians need to get back to “understanding what we are supposed to be doing and what the role of earthly government actually is.” He said, “It seems like Bible 101… Maybe you need to go back and read it again.”