Despite media and abortion advocates’ claims, later abortions are not as rare as the public is led to believe, nor are they only committed on unhealthy babies. Live Action’s undercover investigations have captured footage of late-term abortionists admitting as much.

A new report released by the Centers for Disease Control and Prevention (CDC) reveals that in 2018, an estimated 50,000 abortions were committed at 14 weeks or later, with nearly 6,200 of those committed at or over 21 weeks — the point at which some premature babies have survived with assistance. The report also showed that the number of later abortions increased by four percent from just two years prior (2016). In 2017, the Guttmacher Institute, which publishes more comprehensive abortion totals, reported an estimated 100,000 later abortions that year.

Several states, including California, Washington D.C., Illinois, Maryland, Massachusetts, New Hampshire, Pennsylvania, Rhode Island, Wisconsin, and Wyoming either did not report by gestational age or did not meet reporting standards in 2018. 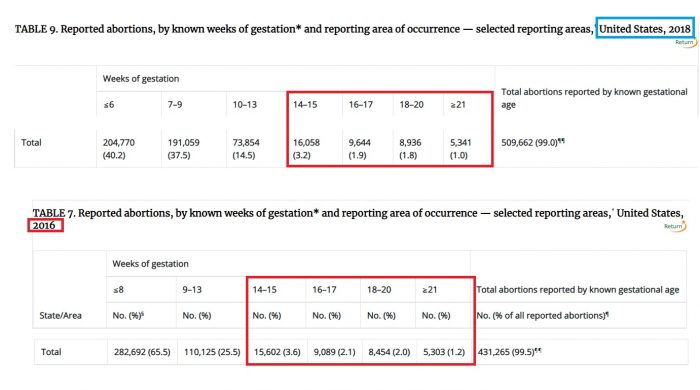 Neither the CDC nor the Guttmacher Institute (a former “special affiliate” of Planned Parenthood) break down abortions past 21 weeks, but they both acknowledge that late-term abortions committed at 21 weeks or later represent 1-1.3% of all reported abortions.

This is no small number.

When you look at the raw numbers, it is much easier to see the human cost.

CDC 2018: There were a reported 5,341 abortions at or after 21 weeks of pregnancy, comprising one percent of those reported by gestation. Based on this, Live Action News estimates that close to 50,000 abortions (48,948) were committed in the second trimester or later with nearly 6,200 estimated after 21 weeks of pregnancy. The estimated numbers (below) are calculated by using reported percentages times the total number (619,591) of reported abortions in 2018:

Guttmacher 2017: In September of 2019, the Guttmacher Institute published abortion statistics showing that 862,320 abortions were reported to them in 2017. According to the data, two-thirds of abortions occurred at eight weeks or earlier. The graph below (2016) gives us some indication on the percentages of later abortions. Using Guttmacher’s reported abortion numbers we discover that over 100,000 (100,891) estimated abortions took place in the second trimester or later in 2017. Out of that number, over 11,000 were committed at 21 weeks or greater.

There are facilities which provide abortions even later in gestation. Planned Parenthood, for its part, commits elective abortions up to the 24th week and opposes late-term abortion restrictions.

An analysis of state laws on abortion published by Guttmacher in December 2020 reveals that “43 states prohibit some abortions after a certain point in pregnancy.”

Despite complicity from the media with the profitable abortion industry, an unearthed media report previously revealed that the abortion industry has commonly deceived the media and public on reasons and numbers of gruesome late-term abortion procedures. An abortion training lecture series from the University of California-San Francisco claimed women who abort later in pregnancy do not do so primarily for health reasons. In addition, Live Action News previously documented abortion industry insider admissions that abortion later in pregnancy is frequently committed on healthy babies and some babies are born alive during later abortions. These testimonies combined with the data show that later abortions occur far more often than the public is led to believe.