The term “late-term abortion” has received a lot of attention lately from abortion supporters who, in their all-too-obvious effort to avoid discussion of what an abortion late in pregnancy actually entails, feel the need to claim that pro-lifers have invented the supposedly ‘medically inaccurate’ term in order to “distort the truth.” But is any of this true, or is this just much ado about nothing? Let’s take a look.

PRO-ABORTION CLAIM: ‘Late-term abortion‘ has no medical definition and is not used in a clinical setting or to describe the delivery of abortion care later in pregnancy. LifeSite News reported on this claim, writing:

American College of Obstetricians and Gynecologists health policy VP Dr. Barbara Levy and Physicians for Reproductive Health fellow Dr. Jennifer Conti told CNN that late-term abortion is “medically inaccurate and has no clinical meaning” and an “invention of anti-abortion extremists to confuse, mislead and increase stigma,” respectively. Dr. Jennifer Gunter, an abortionist and pro-abortion writer who bills herself as “the Internet’s OB/GYN,” claims anyone who uses “late-term abortion” is either illiterate or a liar.

Even the ACOG has released a so-called “fact sheet” claiming “The term ‘late-term abortion’ has no medical definition and is not used in a clinical setting or to describe the delivery of abortion care later in pregnancy.”

Oh, really? Well, perhaps the ACOG isn’t using that term, but abortionists — you know, the people who do abortions for a living and practically nothing else? — use that term, and they use it often.

THE TRUTH: The term “late-term abortion” has been used by abortion industry and media alike for YEARS. According to the Washington Examiner, the term “has been widely used in medical journals and within medical groups.”

Examples of the phrase “late-term abortion” used by the abortion industry itself: 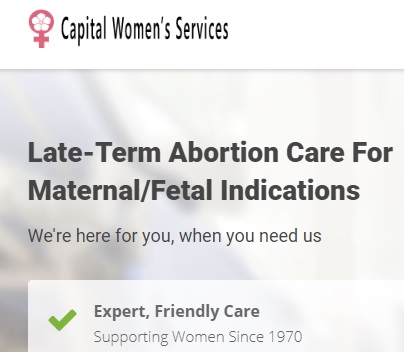 LoveJoy SurgiCenter uses the term on its website, shown in the screenshot below under the “20 weeks pregnant” section… twice: 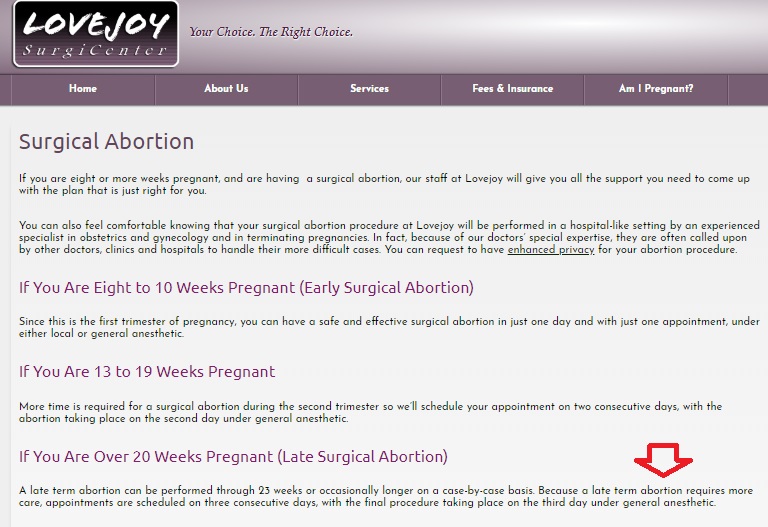 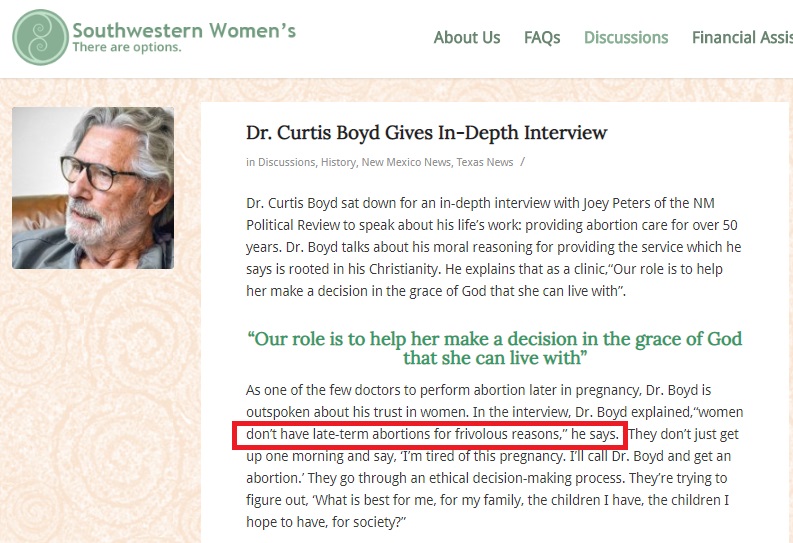 Abortionist Warren Hern uses the term on his business website as well, calling himself a “Late Term Abortion Specialist”:

A Conversation with Faye Wattleton: Part 1, Historical Perspectives Posted on February 4, 2013 by Rachel Port  — Quoting PP’s former president Faye Wattleton, “The [most] significant erosion is this court’s willingness to uphold a law that could ignore a woman’s health in making the decision to permit a late-term abortion. Because in Roe v. Wade the court said that a woman’s health and life always had to be preeminent. We now have a court that says health doesn’t matter.”

And only weeks ago, Planned Parenthood’s Director of Political Communications, Erica Sackin, used “late-term” to refer to abortion in a FOX interview (see 2:14). I guess that must mean Sackin is an “illiterate, lying, anti-abortion extremist.” Right, CNN abortion “experts”? 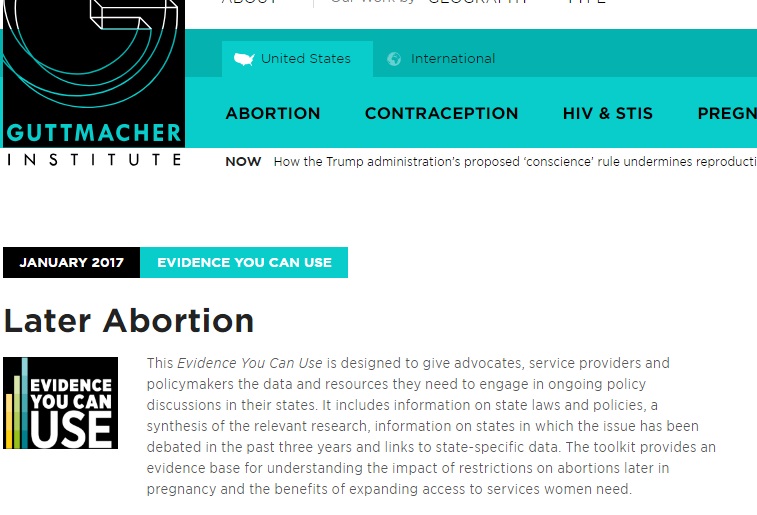 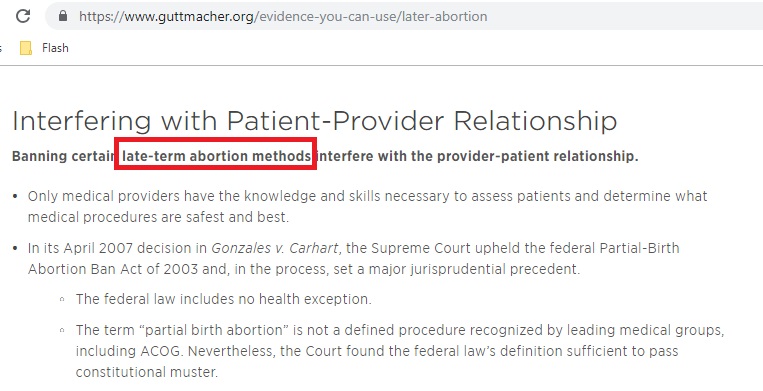 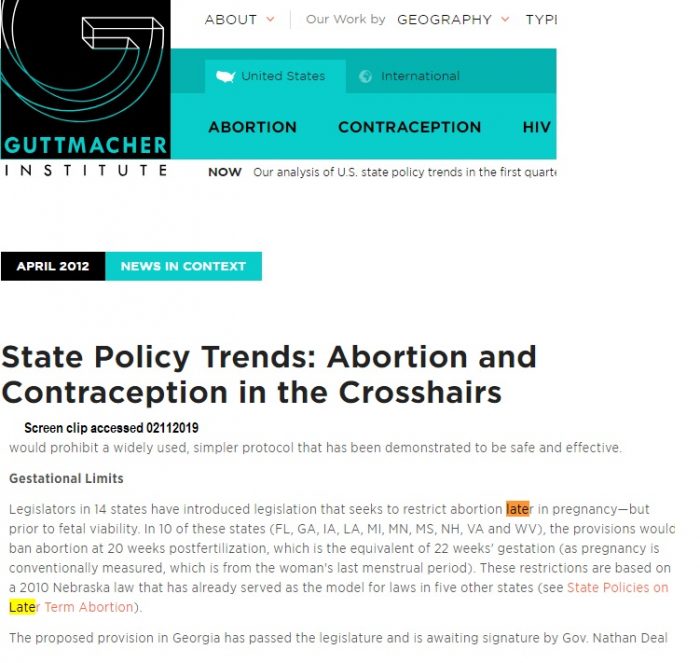 Examples of the phrase “late-term abortion” used by the media:

CNN has apparently received marching orders from the abortion lobby to now put quotes around “late-term abortion” – which they did in a recent headline, shown below.

However, in a previous January 2019 article referencing New York’s abortion law, and in 2013, when publishing a story about abortionist Kermit Gosnell, CNN saw no need to put quotes around the term. 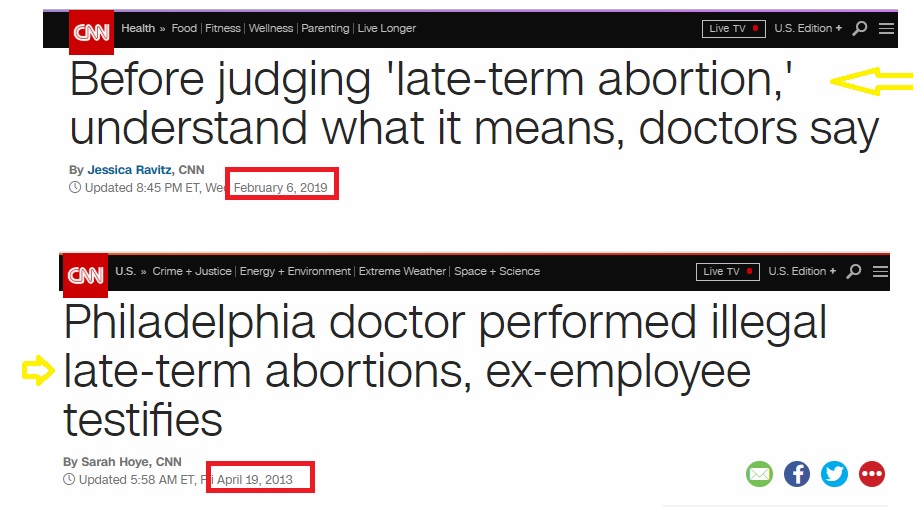 The pro-abortion leaning Huffington Post is also now placing quotes around the term — as evidenced by an article from February 2019. However, HuffPo saw no need to do so in 2015 when a separate article which referenced late-term abortion was published and then updated in 2017. 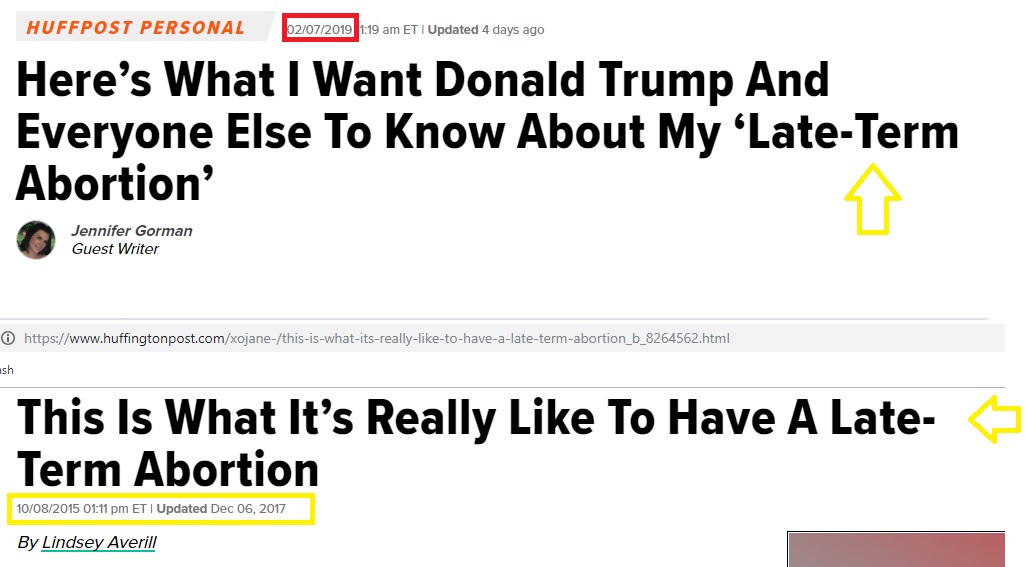 In 2016, MSNBC, not known for being pro-life, used the so-called inaccurate “late-term abortion” phrase with no quotation marks. 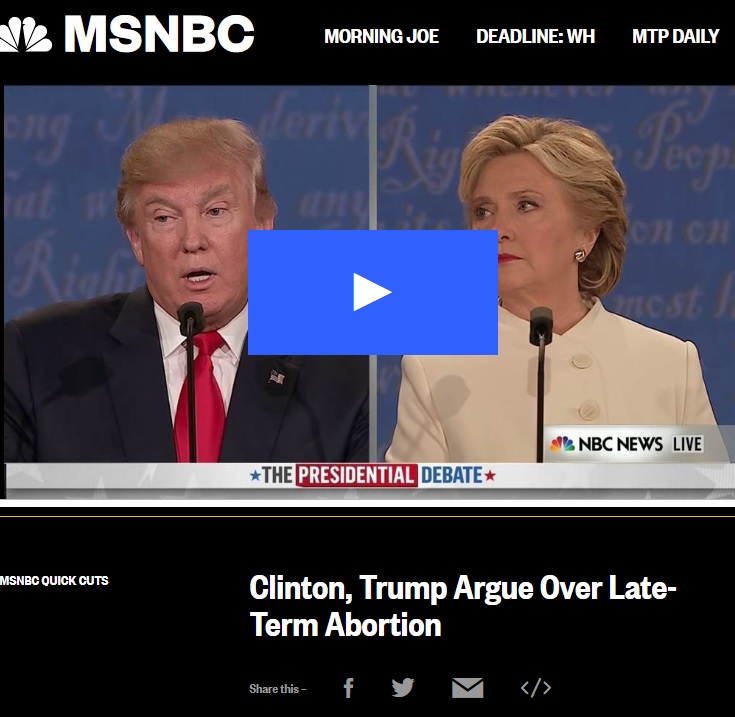 Kermit Gosnell Avoids Death Row, Agrees to Life in Prison: Gosnell was accused of performing late-term abortions on four babies who were born alive, but were then allegedly killed by Gosnell….

The Philadelphia Abortion Doctor Trial Will Sicken You: Worse were the alleged practices of Gosnell and his staff: late-term abortions conducted with minimal anesthesia, high-school students working in the operating room…

An interview with a late term abortion provider: Willie Parker, a Washington-based obstetrician, is one doctor who has performed late-term abortions…

Body Parts on Shelves at Gruesome Abortion Mill: Prosecutors described the clinic as a “house of horrors” where Gosnell kept baby body parts on the shelves, allowed a 15-year-old student to perform intravenous anesthesia on patients and had his licensed cosmetologist wife do late-term abortions…Women came from across the city, state and mid-Atlantic region for the illegal late-term abortions, authorities said….

Late-term abortion doctors fill in for Tiller: Curtis Boyd, an Albuquerque doctor, recently announced on his website that, in response to Tiller’s death, he had begun performing third-trimester abortions. Boyd, 72, also announced that he had hired two California physicians, Susan Robinson and Shelley Sella, who used to work with Tiller on a rotating basis.

“Dr. Tiller was one of the few doctors in the United States who provided late-term abortions to women…”

Hillary Clinton: “I think that the kind of late-term abortions that take place….”

Late-term, or later abortion — no matter how you say it — is a horrific, gruesome act that kills roughly 12,000 preborn children every year. The abortion industry is in crisis mode, and would rather confuse the public by focusing on the phrase rather than on the act itself, which is overwhelmingly opposed by the American public.