As previously reported by Live Action News, late-term abortion facilities have been caught on tape multiple times, expressing willingness to commit abortions on healthy mothers and healthy babies very late in gestation. Washington Surgi-Clinic, a late-term abortion facility operated by abortionist Cesare Santangelo in Washington, D.C., is just one of those caught. In the footage, recently published by Abortion Free New Mexico and Priests for Life in a video series, a staffer there agreed to commit an abortion on a 26-week-old preborn child — for no medical reason.

The staffer tells the woman that an abortion can be done “as soon as tomorrow, if you like,” adding that the three-day abortion procedure would cost $6,200. Waiting another week would raise the price to $7,200.

When asked what the “procedure” is like, the staffer tells her that her cervix will be dilated and then on the third day they do the abortion “when you are completely asleep. So you don’t see… absolutely nothing.”

Below are screens of the reviews along with Chretien’s summaries:

“Worst place ever,” one wrote in 2011. “This is an overcrowded meat market where with antiquated, dirty equipment and insufficient staff.”

“If something goes wrong there is not enough staff to address the issue,” the anonymous google user wrote. “They needed to use a wheelchair after one girl (sitting in the hallway) had a reaction and they couldn’t even get the wheelchair through the doors without the other patients helping move chairs out of the way.”

“Right after that there was screaming, crying, glass breaking, things being thrown heard from the back, and the doctor calling for his nurses in a panicked voice… at no time did anyone let the waiting area know that everything was under control,” she continued. 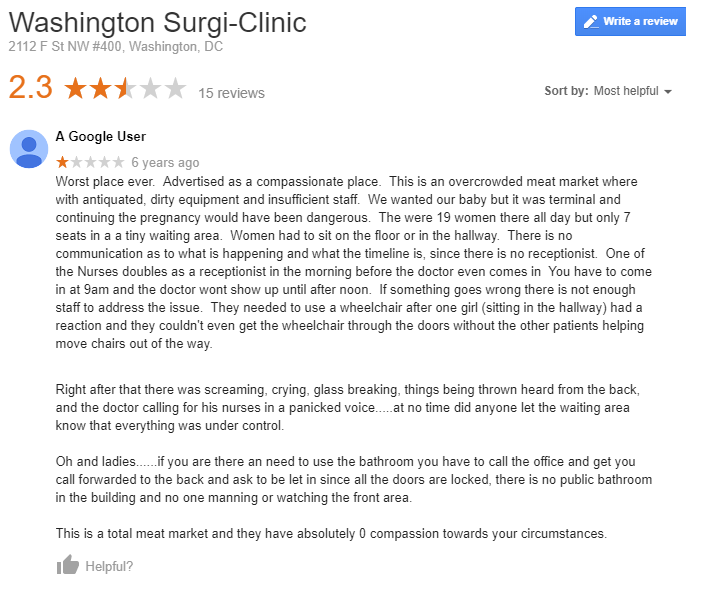 “I almost died here in here and they were about to let me. That’s all I’ll say,” a google reviewer named Jai Mee wrote six months ago. 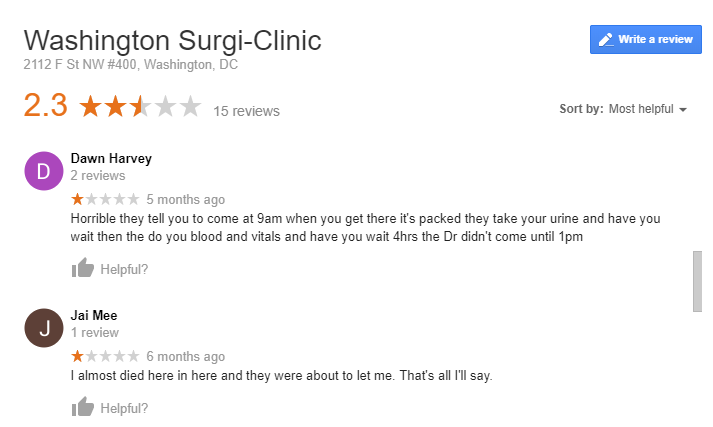 Last year (2016) another alleged patient warned, that the abortion facility was “the worst place you could possibly go.” 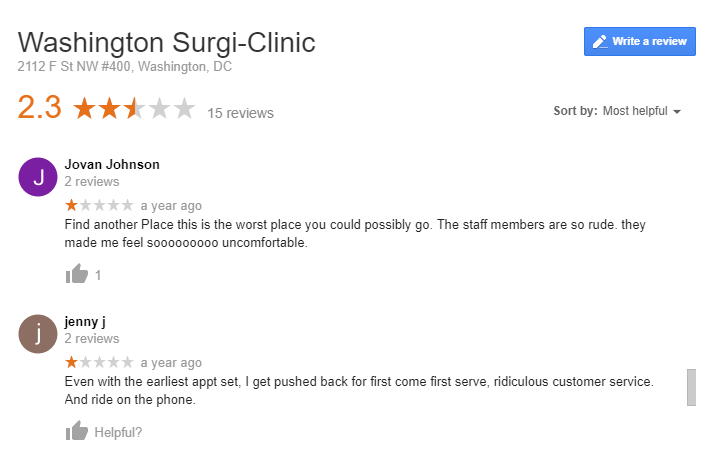 Just five years ago, a patients called this abortion facility, “the worst place ever.” 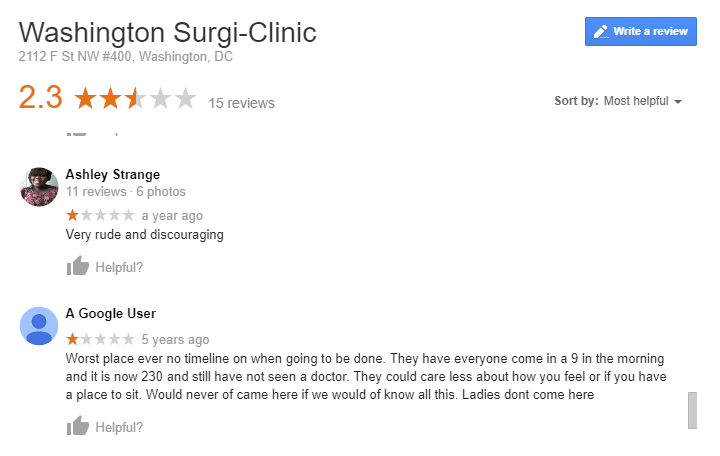 At Vitals.com, additional alleged patients of the late-term abortion facility were just as critical.

On November 2013, one wrote that the facility was “dirty” and “horrible,” and that the abortionist “had blood on his lab coat.” She wanted to leave but was told it was too late for her to be allowed to leave. 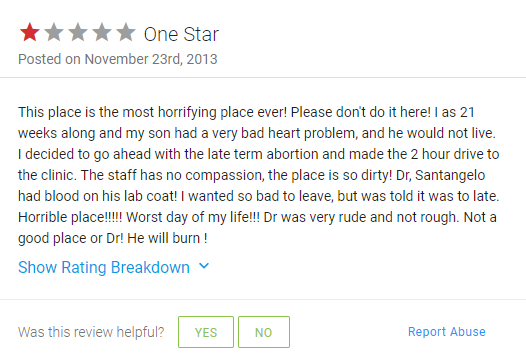 One from June 21, 2011, claimed, “The doctor nor his staff cared in the slightest and were very rude and inconsiderate. We received no counseling or instructions. When we tried to leave they refused to help because the medicine they already gave would cause a miscarriage. They had no where near enough staff to handle an emergency and no one runs the front desk or is around to ask questions.” 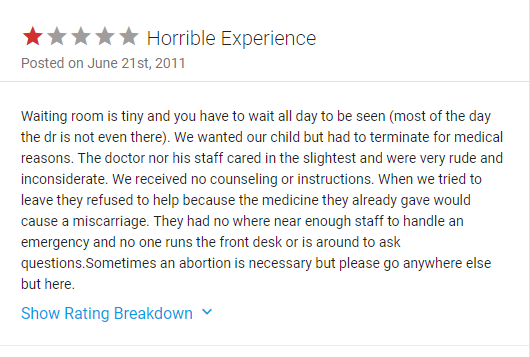 On September 28, 2008, even though this alleged patient complimented the abortion staff, she also said, “I think he is rough (my exam was very painful) and his D.C. office/waiting room was extremely cramped and messy.” 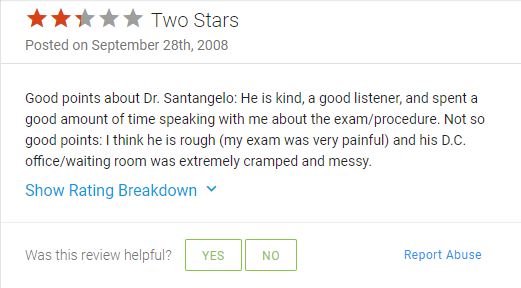 Dr. Santangelo was actually featured among other late-term abortionists in the 2013 Live Action InHuman undercover video series, in which he told Live Action’s investigator, who was 25 weeks pregnant, that if her baby survived an abortion at the Washington Surgi-Clinic, the staff  “would not help it” to survive:

Technically – you know, legally we would be obligated to help it, you know, to survive. But, you know, it probably wouldn’t. It’s all in how vigorously you do things to help a fetus survive at this point…. We wouldn’t intubate… It would be, you know, uh, a person, a terminal person in the hospital, let’s say, that had cancer, you know? You wouldn’t do any extra procedures to help that person survive. Like ‘do not resuscitate’ orders. We would do the same things here… And that’s happened before, to tell you the truth.

If Santangelo was telling the truth about this happening at his facility, they would have violated the Born Alive Infants Protection Act, which requires doctors to give medical care to a viable child who survives an abortion.

Sadly, we may never know. What we do know is that under the infamous Roe v. Wade Supreme Court decision and its companion case, Doe v. Bolton, in many states, women can legally pay someone to kill their preborn babies for any reason up until birth. Late-term abortion is much more prevalent than the abortion industry wants the public to believe.

Fr. Frank Pavone, national director at Priests for Life agreed, telling Live Action News that the undercover phone recordings show just how easy it is to make an appointment to have an abortion late in pregnancy.