While early abortions reportedly comprise a large percentage of abortions committed every year, late-term abortions — those that take place in the second and third trimesters — are not as “rare” as the media and abortion industry claim. Rather than describe the violence of abortion, the media instead fixates on whether anti-abortion advocates are using “medically accurate” terminology. They have claimed that terms such as “partial-birth abortion” and “late-term abortion” were invented by pro-lifers to somehow stigmatize these procedures. But Live Action News previously dispelled this deceptive talking point, documenting how the media and abortion industry have used the term “late-term abortion” for years (many still do). A few examples are below.

What is a “late-term abortion?”

Simple answer: An abortion at or greater than thirteen weeks.

Abortionist and abortion researcher Dr. Daniel Grossman told Parents.com that most Americans view an abortion to be “late-term” if it is performed after 12 weeks, or 3 months. Grossman is on staff at the Bixby Center at the University of California, San Francisco, which trains abortionists — and as Live Action News has documented, Grossman is saturated in the abortion movement.

As you can see in this image published on Planned Parenthood’s website (fetal development page separate from the corporation’s abortion page), babies at 13 weeks and older are more developed. 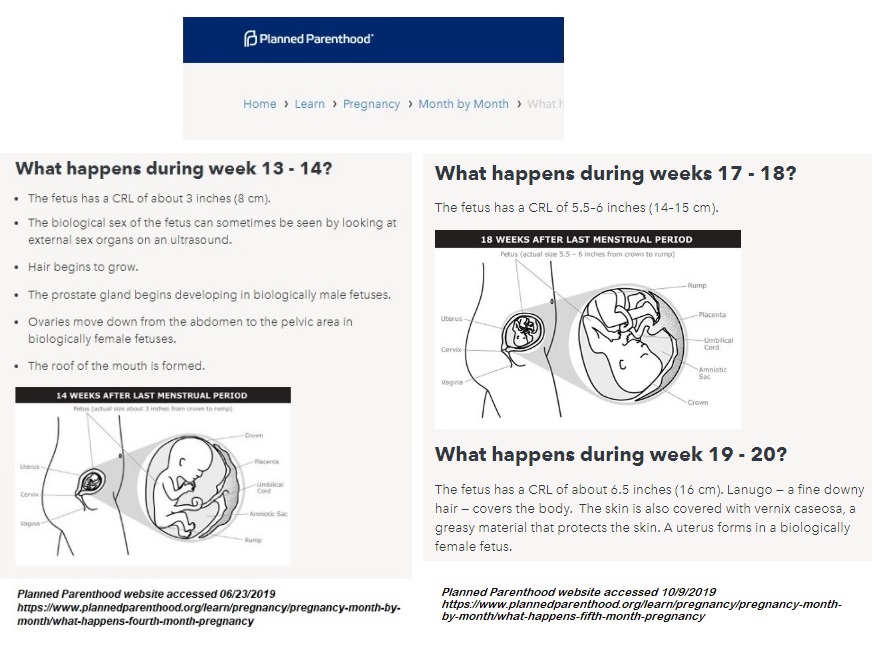 What abortion procedures are used in late-term abortions?

D&E abortions are particularly gruesome, as described by former abortionist Anthony Levatino in the video below.

How many late-term abortions occur annually?

For that answer, we turn to the two reporting agencies on abortion: The Centers for Disease Control (CDC) and the Guttmacher Institute, a former “special affiliate” of Planned Parenthood.  There is no federal requirement that all abortions are reported and no requirement that abortions are reported by gestation. In addition, these two reporting agencies vary in their numbers. Live Action News previously explained some of the reasons for the variation:

A total of 623,471 abortions for 2016 were reported to the CDC from 48 reporting areas – but data on gestation was only gathered from 41 reporting areas to break down abortions by gestation. The numbers exclude 11 areas (California, District of Columbia, Florida, Illinois, Maryland, Massachusetts, New Hampshire, New York State, Pennsylvania, Wisconsin, and Wyoming) that did not report, did not report by gestational age, or did not meet reporting standards, the CDC states.

In 2016, 8.9% of children aborted were past the first trimester of pregnancy.

According to CDC’s numbers 38,448 (55,489 estimated total) abortions were reported past the first trimester. And, although gestational ages are not reported by all states, we can estimate that, according to the CDC percentage of 1.2%, up to 7,481 abortions were committed at 21 weeks or later in 2016.

In 2017, Guttmacher reported a total of 862,320 abortions, claiming that two-thirds of abortions occurred at eight weeks or earlier. Using the same percentages from Guttmacher’s graph below (2016), we discover that over 100,000 (100,891) abortions took place in the second trimester or later.

That 100,000 annual late-term abortion statistic is not small. It’s equal to the…

Baby at 20 weeks, the age at which Dermish commits abortions

Why do women get late-term abortions?

Dr. Eleanor Drey, the medical director of the Women’s Options Center of San Francisco General Hospital which commits abortions into the second trimester, admitted in an abortion training module published by Innovating Education, ” […] there was a study that showed women’s reasons for presenting at 16 weeks or beyond after their last menstrual period. And what they saw was that women often didn’t realize that they were pregnant.” She goes on to list additional reasons, and as you can see, fetal anomaly is the lowest on the list.

According to Guttmacher’s report, “Seventy-two percent of clinics offered abortions up to 12 weeks’ gestation in 2014, 25% up to 20 weeks and 10% up to 24 weeks.” (There are facilities which provide abortions even later in gestation; those abortions are not specifically referenced in the report.) Live Action has previously documented that late-term abortions often occur for reasons of personal choice. The video below is a compilation of an undercover investigation into several U.S. late-term abortion facilities conducted by Live Action. More on that investigation here.

The fact is that late-term abortions (some on preborn babies who are potentially able to survive outside the womb) happen daily in America. These figures reveal that over 100,000 uniquely designed and distinctly human beings die violently from second and third trimester abortion inside abortion facilities each year. This represents nearly 274 babies each day and at least 11 babies every single hour whose lives are ended by late-term abortion.