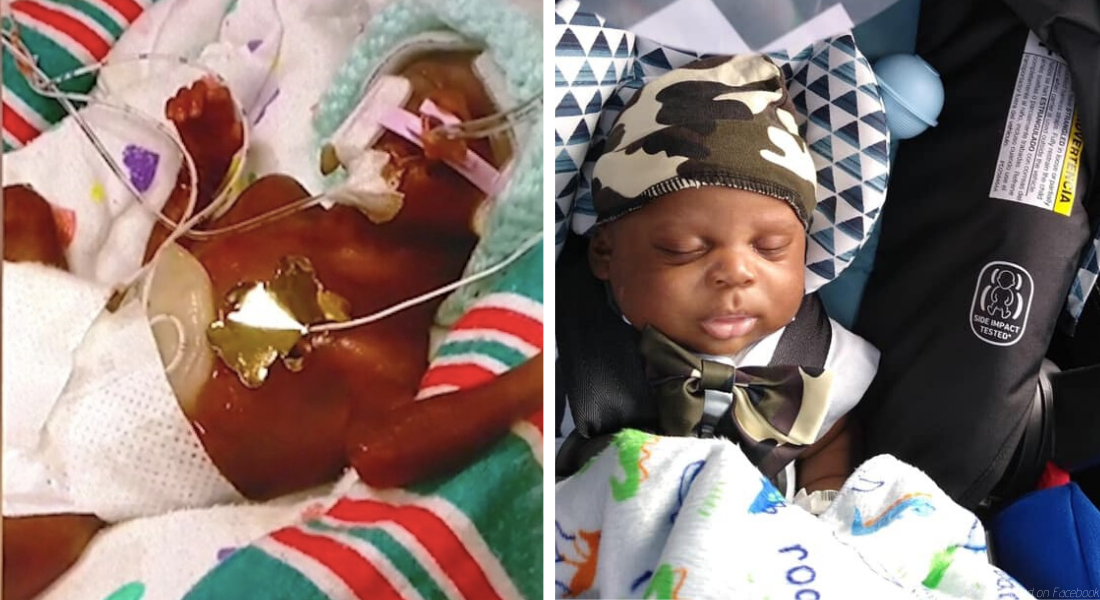 Jemarius Jachin Harbor Jr. was born at just 21 weeks gestation in December 2019, making him the youngest surviving preemie ever. Live Action News previously covered his battle to survive, and now, in an exciting update, Jemarius has graduated from the NICU, and is going home.

Born on December 20th, Jemarius weighed just 13 ounces, and measured smaller than a hand. His mother and father, Jessica McPherson and Jemarius Harbor Sr., told doctors when Jessica went into premature labor to do everything they could to save their son. “We looked at each other in the eye and I told him just give it a try,” McPherson told Fox5. “I just want you to try. As long as you try, that’s all that matters to me. Don’t just up and say that you can’t do it. Just ‘cause you haven’t done it doesn’t mean it can’t be done.”

READ: Baby born premature at 21 weeks is fighting for his life in Georgia

Gina Phillips, Director of Medical Services at Pregnancy Aid Clinics, told Fox5 back in December that Jemarius’ survival “would be [nothing] short of a miracle,” as no other preemie had ever survived after being born so young. McPherson herself had lost two babies previously after going into premature labor at 22 weeks. Lyla Stensrud, who is now a healthy six-year-old, was born at 21 weeks and four days. Jemarius has broken her record by four days, proving that preemies are able to survive at younger and younger ages if given the medical support they need.

Helping to spread the word about Jemarius’ miraculous survival is a mom who knows how difficult the path of prematurity can be. In 2019, Jessica Spradlin wrote an article for Live Action News describing the birth of her son, Kailor, at 22 weeks. But unlike Lyla and Jemarius, both born younger than Kailor, doctors refused to even attempt to save him. Because it was three days before the typically accepted age of “viability,” the medical team refused to even transfer him to another hospital that was willing to treat him. Since then, Spradlin has kept a Facebook page, A Moment with Kailor, where she has spotlighted preemies who beat the odds and survived, including Jemarius. This weekend, she shared an amazing update about Jemarius.

“Jemarius is the YOUNGEST surviving preemie in the world. Born at only 21 weeks 0 days, weighing 13 ounces and shorter than a ruler is long! TODAY he said peace out to the NICU and going home with his parents!!” Spradlin wrote. “He’s just short of 9 pounds!! I’m also SO EXCITED to announce that his parents have asked me to be his God Mother… Congratulations to Jemarius for breaking out of the NICU after a 6 month stay of proving every doctor wrong and making strides of progress for all micro-preemies!!!” Spradlin also shared a GoFundMe page, dedicated to helping raise money for the Harbor family as they transition out of the NICU.

As Jemarius leaves Emory Decatur Hospital in Georgia, he should serve as an example to doctors everywhere on how to treat micro-preemies. They are capable of not only surviving, but thriving, if they’re given the chance. A 2016 study from the Journal of the American Medical Association (JAMA) Pediatrics found that up to 71 percent of preemies can survive if given active care, instead of just palliative care.

Babies like Jemarius are proving that a set age of “viability” can easily be wrong. Instead of abandoning these children to die, doctors should be giving them the opportunity to live.

Editor’s Note: A GoFundMe account has been set up for the family.