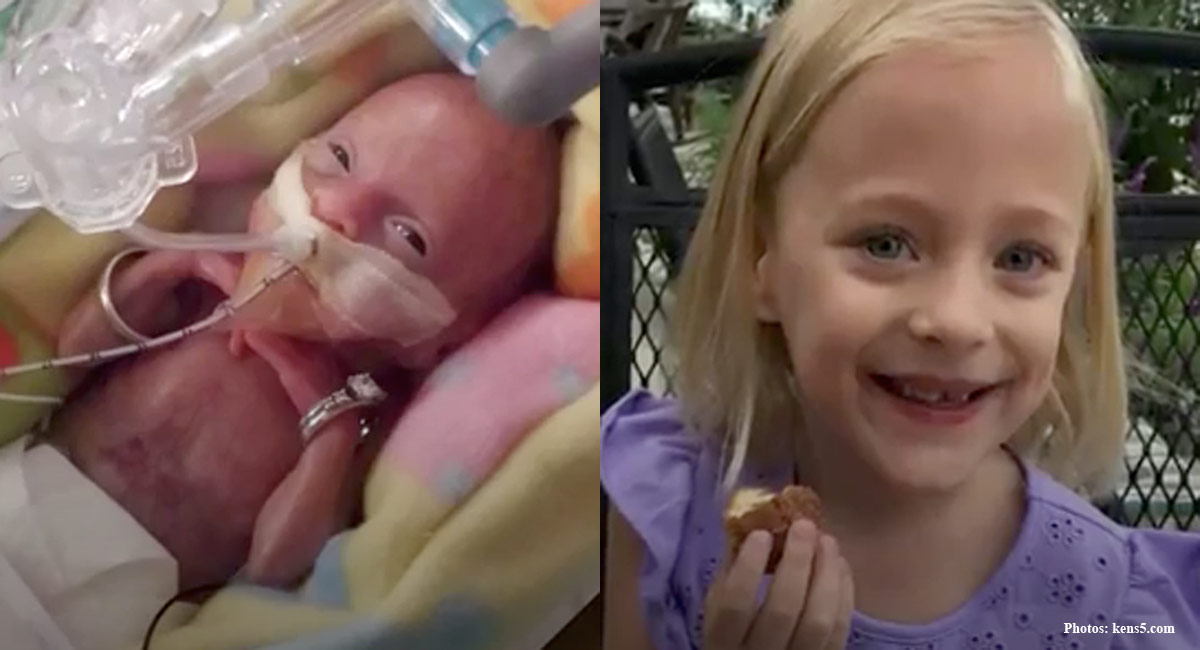 Most pregnant mothers don’t meet their babies until they’ve reached 40 weeks gestation. But sometimes, babies come early. Prematurity can be dangerous, and sometimes babies don’t survive being born too early, or they may experience other repercussions of extreme prematurity. But medical advancements have given more and more of these premature babies the ability to not only live, but to thrive — and one baby in San Antonio, Texas, is being called the youngest ever to survive.

Courtney Stensrud and her husband were thrilled to be expecting a little girl, but her membranes ruptured early at just 21 weeks of pregnancy. So Stensrud began searching for stories of other babies who had survived that young, that might give her hope. “There were stories of 22-weekers, 23-weekers, but nothing about 21-weekers. So I knew that there was little to no survival or viability at 21 weeks,” she said.

Lyla was born on July 11, 2014. “You don’t expect you’re the one that is going to be delivering a baby at 21 weeks, because your baby is supposed to be there until 40 weeks,” Dr. Kaashif Ahmad, who delivered Lyla, said.

READ: These 4 ‘micro-preemies’ show that every life deserves a chance

“The sack the baby was in was going down the birth canal,” Stensrud explained. “So that is not supposed to happen. Your water is just supposed to break.”

Originally, Dr. Ahmad thought there was nothing that could be done for Stensrud’s baby. “Although I was listening to him, I just felt something inside of me say, ‘Just have hope and have faith,'” said Stensrud. “It didn’t matter to me that she was 21 weeks and 4 days. I didn’t care. As he was talking to me, I just said, ‘Will you try?’ And he said he would, and [four] years later, we have our little miracle baby.”

Dr. Ahmad agreed. “We put that super tiny tube down and it fit,” he said. “If it had not fit, we wouldn’t have been able to resuscitate her. But she was just big enough.” He then moved forward with “vigorous resuscitation”. “[W]e placed her under an overhead warmer, we listened, and we heard her heart rate, which we were not necessarily expecting,” he said. “We immediately placed a breathing tube in her airway. We started giving her oxygen, and really pretty quickly, her heart rate began to rise. She very slowly changed colors from blue to pink, and she actually began to move and began to start breathing within a few minutes.”

Stensrud previously had not shared pictures of micro-preemie Lyla, who is now four years old, or shared her name — until now.

She is now sharing Lyla’s story to give hope to other NICU parents, whose doctors tell them it’s not possible for their babies to survive. “There are those moms out there that aren’t give the opportunity,” she said. “The doctors say, ‘No’ without looking at the child. ‘We are not going to do this.’ I think it is unfortunate and it needs to change.”

Dr. Ahmad, as quoted by NBC News, noted, “At this time, resuscitating infants who are born in the 21st week of gestation is not standard practice anywhere in the world. Even for those infants born in the 22nd week of gestation, there continues to be significant disagreement regarding the best course of action due to the high mortality and substantial risks for long-term disability.”

Today, Lyla is healthy and thriving, with no disabilities. According to the medical journal Pediatrics, she is the youngest premature baby to ever survive. And as medicine advances, more and more babies like Lyla could as well. In fact, it has been found that up to 71% of premature babies could survive if given active care, like Lyla was, instead of just palliative care. And in the meantime, babies Lyla’s age can be aborted. Isn’t it time that we protect all lives, whether they are in the womb or born early?

Editor’s Note, 12/4/18: An earlier version of this article took information from a Baltimore CBS affiliate regarding Stensrud’s contraction of chorioamnionitis. Live Action News originally stated, “Courtney Stensrud and her husband were thrilled to be expecting a little girl, but when she contracted chorioamnionitis — an infection that can lead to inflammation of the membranes — she ended up going into labor early at just 21 weeks of pregnancy.”

Stensrud contacted Live Action News regarding this, stating, “I had a thinning cervix and early dilation with bulging membranes at my 20 week ultrasound and that turned into PPROM (Preterm Premature Rupture of Membranes) which is how I caught the infection, which I had for days before Lyla was born.”