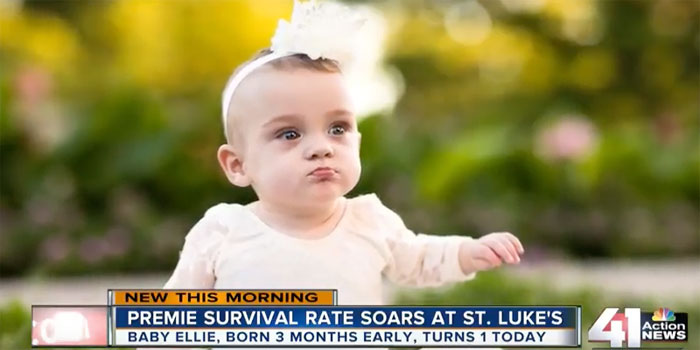 Saint Luke’s Hospital in Kansas City, Missouri, is proving that the age of “viability” is not set in stone. With advancements in medical treatments, it has become an ever-changing number, moving earlier and earlier in the lives of babies. Saint Luke’s was the first hospital in the area to initiate a program designed to treat very premature babies born before 24 weeks of pregnancy. According to KSBH Kansas City (emphasis added), “Nationally… babies born prior to the 24-week mark… have a 6 percent survival rate, but at Saint Luke’s, they have a 50 percent survival rate.” It’s clear that medical intervention has made a huge difference.

And the fact that they started this program three years ago is likely what saved the life of little Eliora “Ellie” Schneider, who just celebrated her first birthday.

Born at 21 weeks and 6 days, Eliora weighed only 14 ounces — the size of a soda can. Her parents had to wait four months before they heard her cry. Her mother, Robin, told KSBH at the time, “The fact that she’s alive and has as few complications as she does is a miracle. There’s no other way around it. Whether or not you believe in God — it’s a miracle. She should not be here… and she needs to know that. That she has a special calling on her life.”

Her parents’ belief in that special calling no doubt played a role in Eliora’s healing. “She had all the odds stacked against her,” neonatologist Barbara Carr told KSBH, adding that her parents “had a very deep faith. They just continued to believe, we all kept working on and continuing to believe in her and she did well.” Eliora has regular doctor visits and regular physical therapy, which are helping to monitor and keep her on track developmentally.

While babies born very prematurely often have developmental issues, Carr says these delays may not be seen until a child starts school. But what’s most important is that children like Eliora are given a chance at life, regardless of possible challenges. And now other hospitals are beginning to treat these very premature babies as well. KSBH notes, “Over the past three years, equipment and strategy to treat these premature babies have improved. Carr said some other hospitals in the area also now treat babies born prior to 24 weeks.”

A 2015 study published in the New England Journal of Medicine is changing the way the medical community looks at viability, or the ability of babies to survive outside the womb. The study found that “babies born at 22 weeks had a nearly 25 percent survival rate if actively treated in a hospital.” Around 5,000 babies are born at this gestational age every year in the United States. According to University of Iowa pediatrics professor Dr. Edward Bell, “these babies deserve a chance.” He also believes 22 weeks, not 24, should be “the new standard of viability.” But this is, of course, controversial, because if babies can survive earlier and earlier with medical intervention, then abortion laws based on viability may eventually be changed to reflect this.

In the video below, it is plain to see that preborn children Eliora’s age are clearly human beings. And these human beings, no matter what their age, deserve to be protected and treated as valuable persons with a right to life:

By the end of the first trimester, when most abortions take place, babies in the womb are already either right- or left-handed, sex is determined (and females already hold egg cells in their ovaries), they have brainwaves, they have all four chambers of the heart, they can swallow, and their intestines begin to absorb glucose. They can even make facial expressions.

By week 21, preborn babies are so developed that they have sweat glands, functioning digestive enzymes, and startle in response to loud noises.

And, as we see in the case of Eliora, these premature children may be able to survive outside the womb if they are given proper medical attention and assistance. Hopefully, in the future, we will see even higher success rates in helping the weakest among us to go on and have a chance at life.