Planned Parenthood’s recent enthusiastic support for late-term abortion measures in Virginia and New York mirrors its support for partial-birth abortion in 2004, when then-president Gloria Feldt applauded a court decision ruling that a federal ban on partial-birth abortion (a gruesome procedure in which a second or third trimester preborn child is removed feet first from the womb, while the head remains in the birth canal and the brain is suctioned out through the back of the skull) was unconstitutional. Feldt spoke to CNN, calling the ban on such a procedure “a brazen affront to women’s health”:

The abortion ban is a brazen affront to women’s health, the right to medical privacy and the U.S. Constitution and was rightfully struck down. This ruling is a critical step toward ensuring that women and doctors — not politicians — can make private, personal health care decisions.

In an August 2016 interview, former Planned Parenthood president Cecile Richards told the Washington Post, “We need to challenge or repeal every single [abortion] restriction that’s out there.”

Planned Parenthood even opposes 20-week abortion bans. Richards claims in the tweet below that banning abortion at 20 weeks is “unpopular.” The truth is that 75 percent of adults (including 61 percent identifying as pro-choice) want abortion restricted to the first three months (first trimester) of pregnancy, according to recent polls. 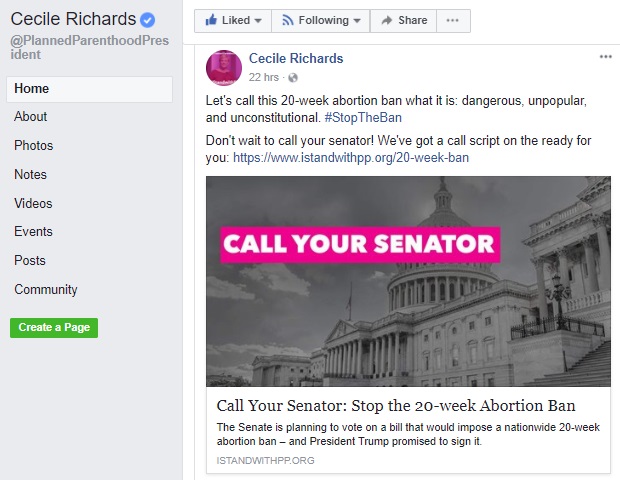 According to several former late term abortion clinic workers who have come through my organization And Then There Were None, approximately 50% of 3rd trimester abortions are performed on healthy babies. In my own personal experience, we often referred women to late-term abortion providers who were pregnant with healthy babies, but they wanted the abortion because they had either just broken up with the baby’s father, lost their job, or something similar….

Do elective abortions take place through the 9th month of pregnancy? The unfortunate and horrifying answer is yes. We must work to end these barbaric practices and truly care for mothers and their children.

Planned Parenthood commits abortions at and after viability

Planned Parenthood has no qualms committing abortions after viability, even though its former president falsely claimed they didn’t provide them. Abortion is offered up to 24 weeks at Planned Parenthood affiliates in several locations in New York and California.

Planned Parenthood in San Bernardino County charges between $470 and $2600 for an abortion — with the higher price likely correlating to the limit of “24 weeks.” 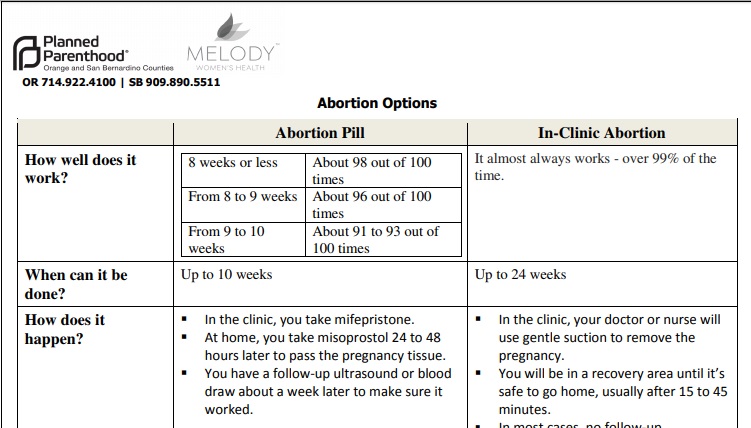 In 1990, Nicki Nichols Gamble, executive director of the Massachusetts state office of Planned Parenthood, described a late-term abortion proposal, which Planned Parenthood helped to draft, as a “fairly moderate one,” according to the Associated Press.

Dr. James Koch told the Boston Globe that the Planned Parenthood board voted unanimously for the amendment of abortions at any time in the pregnancy. Opposing the measure was Planned Parenthood abortionist, Dr. Stanton Goldstein, who was clear about his reasons.

“I’m against this referendum as it legalizes abortion up to delivery,” Goldstein told the Boston Globe, “I cannot think of a single reason for aborting a healthy baby,” he said.

He then asked, ″If the number of abortions performed after the second trimester is so ‘tiny’ then why are we legislating for it? Is it so ‘tiny’ because it has not been legal up till now?″

Planned Parenthood has an abortion mission. Its plan for 2019 is to “expand abortion.” Their new president Leana Wen called abortion their “core mission.” Their plan is a reboot of previous strategies laid out since the 1970’s, when Planned Parenthood first began committing abortions. It calls for similar measures to those proposed in New York and Virginia. 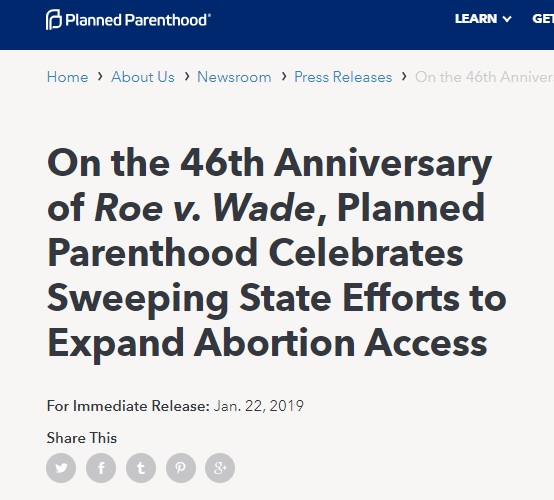 A press release states that it is “well-positioned to not just defeat hostile legislation, but also push forward proactive legislation that will expand access,” including:

● Illinois, where the goal is public funding of abortion and ways the state can “codify the right to abortion in state law”

● Rhode Island, where Planned Parenthood “will work in the 2019 legislative session to codify the right to… abortion in state law”

● Washington, where Planned Parenthood “is focusing on passing the Reproductive Health Equity Access bill” to remove barriers to abortion 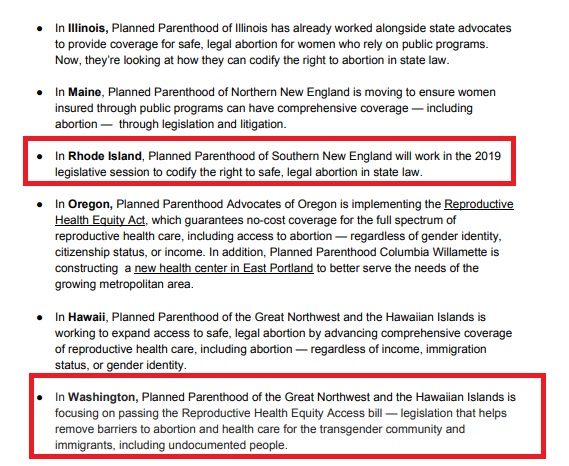 Planned Parenthood denies the personhood of the preborn child

Planned Parenthood once claimed children were “priceless” unless “unwanted” by their parents or society.

In 2016, former president Cecile Richards was asked by Doug Wagner of WHO Newsradio in Iowa, “At what point does that child – or that unborn person, fetus – whatever you want to call it – at what point does that baby get the constitutional rights?” Richards, replied: “Well, I don’t really, actually – I don’t know that there’s an exact answer for that. … [U]ntil a pregnancy is viable [women] have the right to make that decision.”

In 1997, Faye Wattleton, then-president of Planned Parenthood allegedly admitted to Ms. Magazine, “I think we have deluded ourselves into believing that people don’t know that abortion is killing. So any pretense that abortion is not killing is a signal of our ambivalence, a signal that we cannot say yes, it kills a fetus, but it is the woman’s body, and therefore ultimately her choice.”

Planned Parenthood’s Arizona political arm later quoted Wattleton: “The [most] significant erosion is this court’s willingness to uphold a law that could ignore a woman’s health in making the decision to permit a late-term abortion. Because in Roe v. Wade the court said that a woman’s health and life always had to be preeminent….”