The drop comes despite a two percent increase in the number of abortion facilities (Guttmacher counted 808 facilities providing abortions in 2017). The information confirms earlier 2015 CDC data (their most recent) indicating the lowest abortion numbers since Roe v. Wade. CDC’s abortion totals are significantly lower than the Guttmacher Institute’s because the organizations gather abortion data differently. 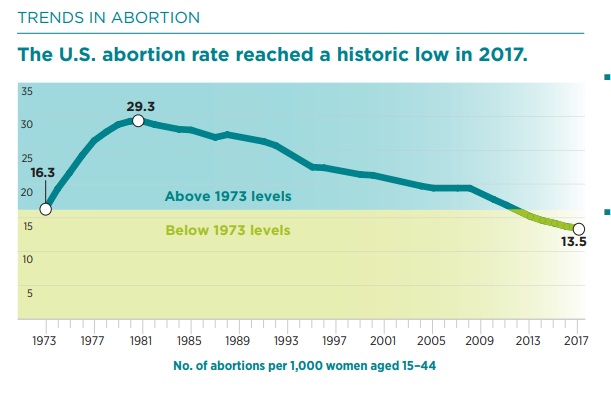 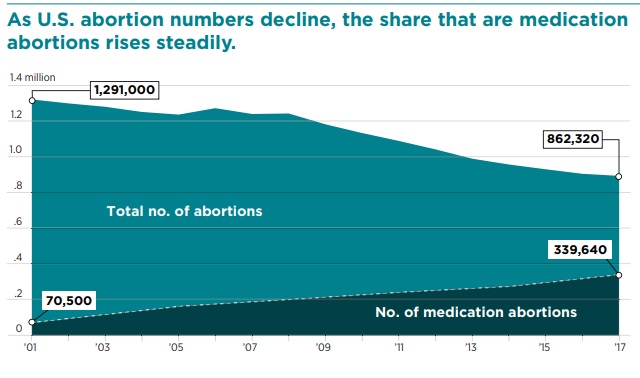 According to Guttmacher’s report, “Seventy-two percent of clinics offered abortions up to 12 weeks’ gestation in 2014, 25% up to 20 weeks and 10% up to 24 weeks.” (There are facilities which provide abortions even later in gestation; those abortions are not specifically referenced in the report.) Guttmacher reports that two-thirds of abortions occurred at eight weeks or earlier, and the graph below (2016) gives us some indication on the numbers of later abortions. Using Guttmacher’s reported abortion numbers for 2017, we discover that over 100,000 (100,891) abortions took place in the second trimester or later.

Guttmacher reports that, “White patients accounted for 39% of abortion procedures in 2014, black patients for 28%, Hispanic patients for 25%, and patients of other races and ethnicities for 9%.” Click here for the CDC’s most recent data (2016) on the Black, Hispanic, and White abortion rates.

Using the most recent US Census Bureau data estimates published by the Kaiser Family Foundation on race in the U.S., we estimate the following:

Why are numbers declining?

Dr. Michael J. New, visiting Assistant Professor of Political Science and Social Research at The Catholic University of America, as well as an Associate Scholar at the Charlotte Lozier Institute, gave Live Action News an indication why national abortion numbers are on the decline.

“Since the early 1980s, there has been a significant increase in the percentage of unintended pregnancies being carried to term, This shows that pro-life efforts to change hearts and minds, assist pregnant women, and pass protective laws, are all playing a key role in the long-term decline in the U.S abortion rate,” Dr. New told Live Action News.

An analysis of the report by New also revealed:

In their report, Guttmacher acknowledges that increased health and safety standards for abortion facilities are correlated with abortion rate declines in some states. However, they take considerable pains to argue that other pro-life policies have had little do to with the overall decline. … That said, the main problem with Guttmacher’s analysis is they only consider data between 2011 and 2017 — a relatively short period of time. When one considers the fact that the U.S. abortion rate is less than half of what it was in 1980 — it is evident that the efforts of pro-lifers are having a significant impact.

In a separate report, Guttmacher warns, “It is possible that the 2011–2017 decline in abortion was not as large as it appears from the Guttmacher Institute’s abortion provider census: There could have been an increase in self-managed abortions happening outside of medical facilities, which the census would be unable to capture.”

However, while the reported abortion numbers are moving in the right direction, they still represent hundreds of thousands of preborn children who die each year, and tragically, they reveal that nearly 2,400 (2,363) innocent lives are lost every day to the violence of abortion.

Editor’s Note, 9/27/19: Clarifications/corrections made on numbers by race.