The Centers for Disease Control (CDC) just released its latest (2016) data on reported abortions which reveals a 50 percent drop in the United States in abortion since 1980. According to the November 2019 report, a total of 623,471 abortions for 2016 were reported to the CDC from 48 reporting areas. Using numbers from “continuous reporting areas,” the data showed that between 2007 and 2016, the total number of reported abortions, abortion rate (abortions per 1,000 women aged 15–44 years), and abortion ratio (abortions per 1,000 live births) “reached their lowest level for the entire period of analysis (2007–2016).” 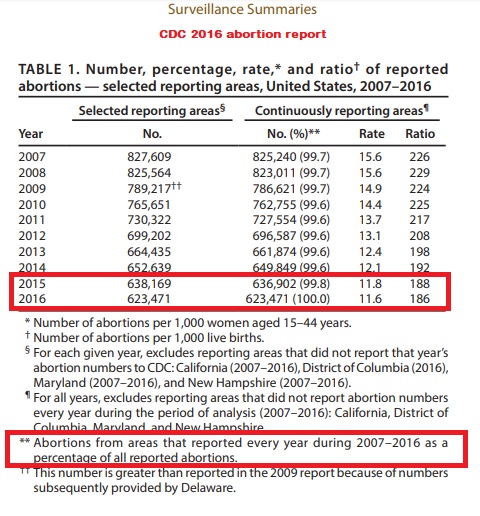 Dr. Michael New, Visiting Assistant Professor of Political Science and Social Research at The Catholic University of America and Associate Scholar at the Charlotte Lozier Institute, told Live Action News, “Overall, the news is good for pro-lifers.” He did a quick analysis and found:

A few key points from the report are listed below.

The CDC report for 2016 used data for 41 reporting areas to break down abortions by gestation. The numbers exclude 11 areas (California, District of Columbia, Florida, Illinois, Maryland, Massachusetts, New Hampshire, New York State, Pennsylvania, Wisconsin, and Wyoming) that did not report, did not report by gestational age, or did not meet reporting standards, the CDC states.

According to CDC’s numbers 38,448 abortions were reported past the first trimester. And, although gestational ages are not reported by all states, we can estimate that, according to the CDC percentage of 1.2%, up to 7,481 abortions were committed at 21 weeks or later in 2016.

In addition, CDC states that, “Among those that were eligible for early medical abortion on the basis of gestational age (i.e., performed at ≤8 weeks’ gestation), 41.9% were completed by this method.”

Black women also had the highest abortion rate in 2016: 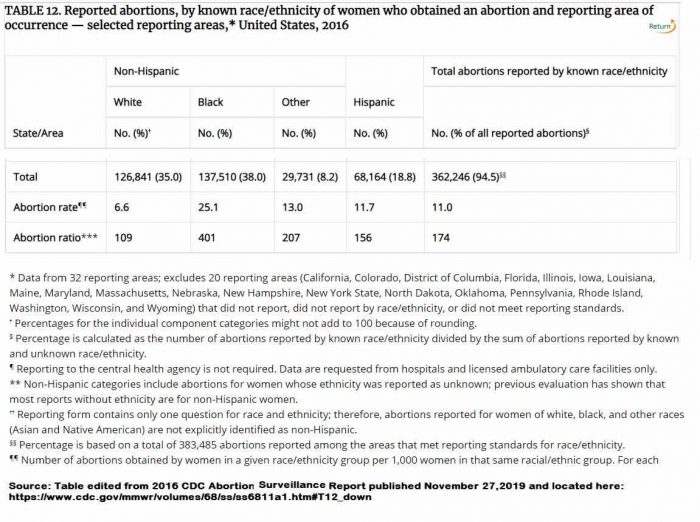 Tragically, the report also noted, “In 2015… two women were identified to have died as a result of complications from legal induced abortion and for one additional death, it was unknown whether the abortion was induced or spontaneous.” The CDC has not updated abortion deaths for 2016 yet.

The Centers for Disease Control (CDC) collects information the states provide, but due to a wide variety of state requirements on abortions, the CDC fails to report abortion numbers for a number of states. Guttmacher numbers are more comprehensive since they gather their information directly from abortion providers. Live Action News’ analysis of the CDC’s latest abortion numbers can be found here.