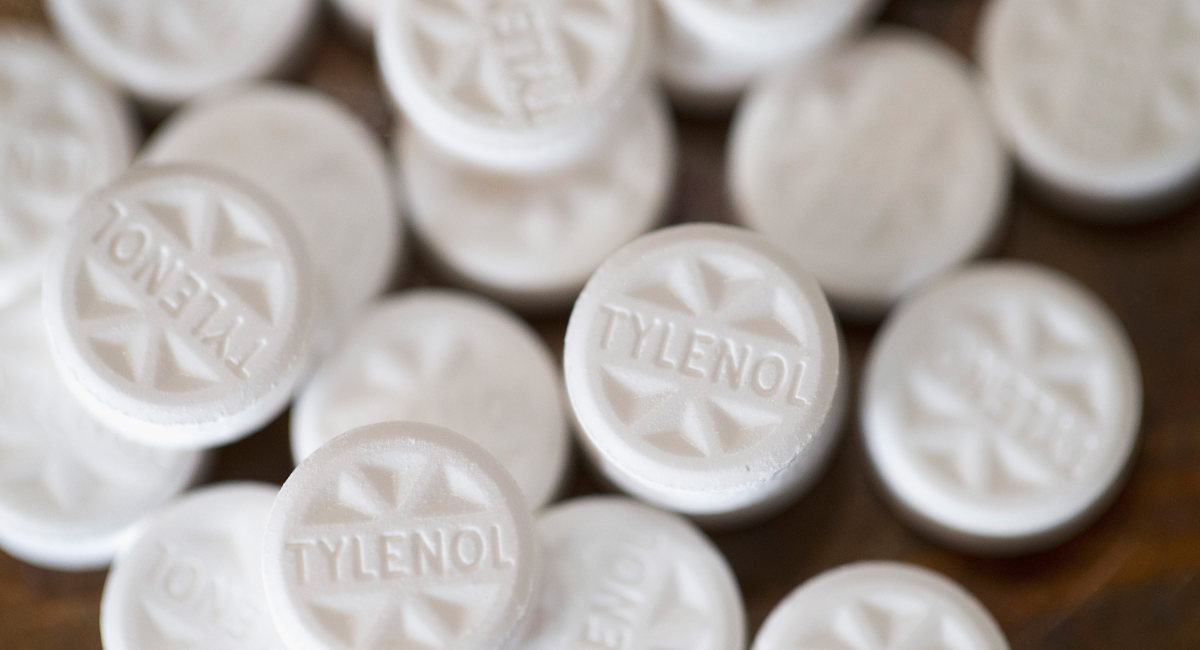 Bloomberg News’ U.S. healthcare reporter Cynthia Koons has joined the pro-abortion chorus, proclaiming that the deliberate killing of a preborn child with abortion pills is “safer than Tylenol.” The comparison between the abortion drug mifepristone and Tylenol is yet one more way the media is kowtowing to abortion enthusiasts to ensure the deadly pill regimen is stocked in the medicine cabinets of American women and girls. 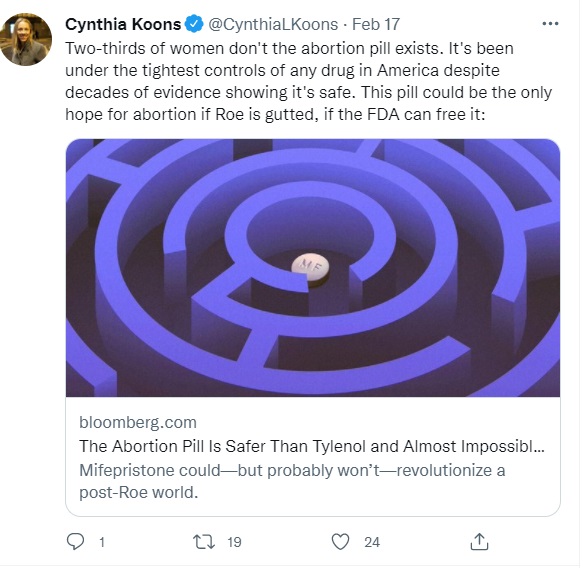 CLAIM 1: “The abortion pill sends fewer people to the ER than Tylenol.”

Koons begins by linking several unrelated sentences about the abortion pill, (manufactured under the drug name mifepristone) together. “Mifepristone may be the least marketed pharmaceutical product in the U.S.,” she states. “There aren’t any ads for it on TV. Most doctors can’t prescribe it. Pharmacists don’t know much about it, since it doesn’t sit on the shelves at CVS or Walgreens. It would be reasonable to assume this is all because mifepristone is exceptionally dangerous. But it sends fewer people to the ER than Tylenol or Viagra. It’s also highly effective when used as intended: to induce an abortion.”

THE TRUTH: First, Tylenol was not created to intentionally end the lives of preborn babies, while the sole purpose of mifepristone (or RU-486 as it was initially called) is to end a pregnancy by killing a preborn human being. The most current data published by the Food and Drug Administration (FDA) shows that mifepristone has likely ended the lives of nearly 5 million preborn children since its approval in 2000 (an average of more than 230,000 human beings yearly). Has Tylenol ended the lives of 5 million human beings? According to an article in ProPublica, the accidental death toll of Tylenol’s active ingredient, acetaminophen, was 1,567 from 2001-2010 (an average of 157 people yearly).

But never mind the obvious; Koons failed to make her case by not breaking down how many Tylenol dosages are used per year versus the number of women who take the abortion pill, a minor omission that could have a large impact on the overall comparison. Instead, Koons’ sleight of hand comparison linked to a study published in 1999, the year before the abortion pill was even approved in the U.S. This study identified acetaminophen as the “substance most commonly ingested in suicide attempts.” The drug name acetaminophen is produced under multiple brand names, not just Tylenol. While Koon’s 1999 study reviewed “636 charts” pertaining to hospitalization of acetaminophen, it concluded that “relatively few” of the patients that presented for overdoses “require hospitalization” and “for those hospitalized,” the outcome was “good.”

Koons’ articled claimed, “Over the past two decades, researchers and medical bodies have built a growing and compelling case that many, if not all, of the regulations [on the abortion pill mifepristone] are medically unnecessary.” Yet, a Live Action News review of studies proclaiming the safety of the abortion pill showed the majority of study authors were heavily tied to the abortion industry, with several also on the payroll of the abortion pill’s manufacturer Danco Laboratories or generic manufacturer GenBioPro. Koons’ failure to cite a single study that concluded the contrary position was also revealing.

Koons cited a paper published in the pro-abortion Journal Contraception which “concluded that abortion by pill is ‘highly effective and safe'” because the authors claimed just “0.3% of patients who took the pill ended up hospitalized.” Koons failed to point out that most of the abortion outcomes reviewed in that study took place between 1994 and 2011, when safety regulations in the U.S. were much stricter than they are today.

A much more recent abortion industry study found that six percent (6%) of women who took the abortion pill visited the emergency room or an urgent care center for abortion pill-related complications, and just over 4% required surgical interventions. Those findings mirror data from the UK. In addition, a 2021 population-based longitudinal cohort study on the abortion pill, which reviewed 423,000 confirmed induced abortions from 1999-2015, concluded that the rate of abortion-related emergency room visits following a chemical abortion increased over 500% between 2002 and 2015 within the study population.

THE TRUTH: Koons falsely claims “most doctors can’t prescribe” abortion pills, but what she should have stated is that most choose not to prescribe it. While the abortion lobby wants abortion to be “normalized,” a majority of healthcare professionals want no part of it.

The Food and Drug Administration’s (FDA) regulations make clear that any clinician approved by the pill’s manufacturer can be a “prescriber,” as demonstrated in the image below from the FDA’s safety system (REMS). In fact, abortion industry insiders conceded that early on, physicians did not want to sign this prescriber agreement nor did they want to stock the drug. And even representatives of the pill’s manufacturer acknowledged that they regularly encountered physicians who say they simply send their patients to Planned Parenthood. 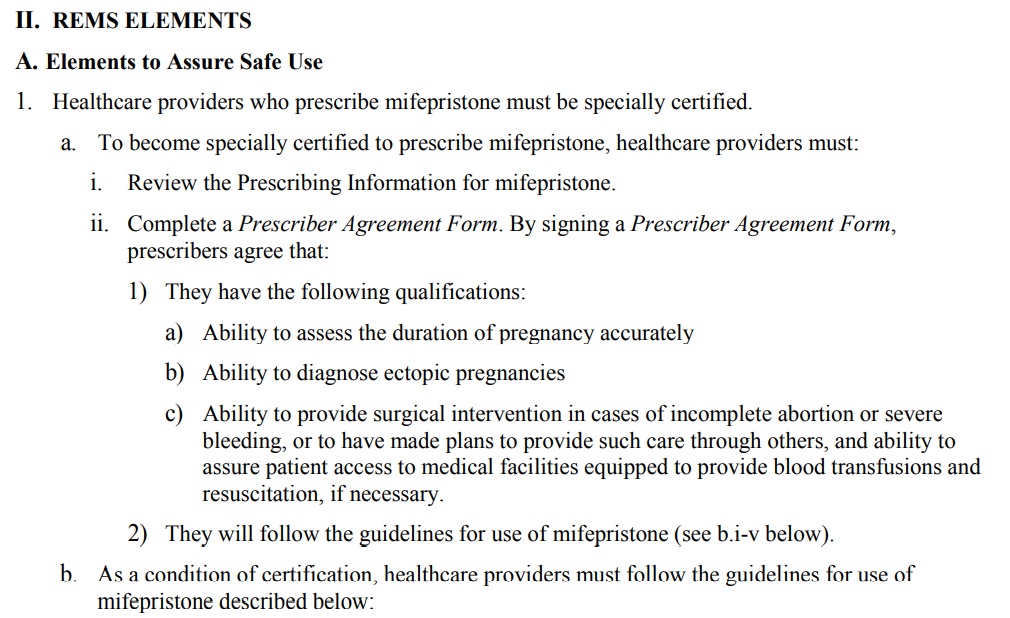 Koons then claims, “Pharmacists don’t know much about it, since it doesn’t sit on the shelves at CVS or Walgreens.”

CLAIM 3: “Mifepristone may be the least marketed pharmaceutical product in the U.S.”

Koons claims, “Mifepristone may be the least marketed pharmaceutical product in the U.S” and points to the fact that there are no TV ads for the drug. She later contends that “in the two decades since FDA approval, mifepristone has failed to reach liftoff. If anything, it’s receded from view.”

THE TRUTH: The abortion pill now makes up 40 to 50% of all abortions according to the CDC, and 54% according to a preliminary report from the Guttmacher Institute — and Koons failed to acknowledge the marketing benefit of free earned media rolled out by pro-abortion journalists who simply regurgitate the abortion lobby’s talking points. Just as with tobacco and opioids, the mainstream media seems eager to simply take the word of abortion corporations rather than scrutinizing their studies or considering evidence revealing the abortion pill’s dangers.

CLAIM 4: “A labyrinth of regulatory restrictions kept abortion pills intentionally out of reach.”

THE TRUTH: In 1993, pro-abortion President Bill Clinton signed an executive order directing the FDA to expedite the marketing of the abortion pill, RU-486. In 1994, his administration pressured the French pharmaceutical manufacturer Roussel-Uclaf to assign the U.S. rights of marketing and distribution to the Population Council. This eugenics-founded “non-profit” brought the abortion pill into the U.S. and later set up the pill’s manufacturer, Danco Laboratories, LLC, a sub-licensee of the Population Council.

After Clinton’s FDA gave approval of the drug, women began to die; due to serious adverse events and deaths, pro-abortion President Barack Obama’s FDA placed the abortion pill under a safety system known as the Risk Evaluation and Mitigation Strategy (REMS) in 2011. In 2016, when the abortion industry lobbied to have the abortion pill removed from the REMS, Obama’s FDA instead kept it in place while granting the abortion lobby a way to further chip away at the REMS by removing the requirement for the abortion pill manufacturer to report adverse events other than deaths. This enabled Biden’s FDA to further weaken the REMS safety regulations in 2021 and permanently allow abortion pills to be shipped by mail — even if they end up in the hands of minors. Biden’s was the third pro-abortion administration whose FDA kept the abortion pill under the safety regulations — which Koons suggests would keep the deadly drug “intentionally out of reach.”

With nearly half of abortions in the U.S. now being done by abortion pill, Koons’ claim that the pills are “intentionally out of reach” appears to be a figment of her own imagination.

From the onset, the company structure, executives, and original investors of abortion pill manufacturer Danco Laboratories have remained shrouded in secrecy — a point Koons acknowledges in her piece, writing, “Danco’s origin story, and almost everything else about it, is intentionally vague. According to a Washington Post article from 2000, the ‘secretive and obscure’ company was formed in the Cayman Islands in 1995. Danco makes no other medicine besides the abortion pill and keeps a low profile to this day. It lists no street address or phone number. It just uses a P.O. box.”

Koons then cited an FDA official who claimed the FDA’s “regulatory blessing” to the abortion pill “was purely scientific, not political,” which is another misleading statement. There was plenty of evidence the move was political. Interviewers from Columbia University who recently spoke to those involved at that time noted that the names of the FDA staff involved with approving the abortion pill have never been released. One of the FDA’s senior medical reviewers of the abortion drug admitted in the report, “It’s definitely not standard. It’s not routine, you can look up almost every other drug that I was the primary medical officer for and my name would appear right there on the review.”

Despite acknowledging a history of secrecy on the abortion pill, Koons failed to press the FDA on precisely what “published literature and data” it reviewed in making its most recent changes to “remove the in-person dispensing requirement.” Instead, Koons chose to quote the co-founder of the questionable abortion referral group Plan C as some sort of expert.

Plan C not only advises women to buy abortion pills from foreign websites despite FDA warnings not to purchase mifepristone online, but also currently publishes instructions for women on how to flout state abortion pill restrictions. Koons also cited abortionist Dr. Daniel Grossman, despite his recent sketchy suggestion that ER doctors falsify records to hide abortion pill complications in a post-Roe era. Certainly, doing so would cloud any reports of hospitalization due to the abortion pill — something any impartial journalist should condemn. Grossman is co-author on many abortion pill-related studies, and is in senior leadership capacity at Ibis Reproductive Health, which has been receiving funding directly from the abortion pill’s manufacturer. Danco financially supported Ibis during the time that Grossman began to publish his abortion pill studies.

Comparing the abortion pill to Tylenol has one purpose: to prop up the profitable abortion industry by masking potential serious risks which can harm or kill women and teens, all while ignoring how mifepristone violently ends the lives of preborn human beings.