The abortion pill has “crossed the threshold to become the majority of all abortions” committed in the United States, according to a preliminary analysis by the Guttmacher Institute. Planned Parenthood’s former “special affiliate” and research arm now estimates that chemical abortion pills made up an alarming estimated 54% of all US abortions in 2020. The latest percentage was compiled from data sent to Guttmacher by approximately 75% of US abortion facilities that committed abortions in 2020, and only includes “provision of medication abortion overseen by clinicians” and does not include abortions that were “self-managed.”

In reviewing upcoming data for 2020, Guttmacher found that the preliminary data shows that 2020 was “the first [year] medication abortion crossed the threshold to become the majority of all abortions and it is a significant jump from 39% in 2017, when Guttmacher last reported these data…. [F]inal estimates will be released in late 2022 and the proportion for medication abortion use is not expected to fall below 50%.” 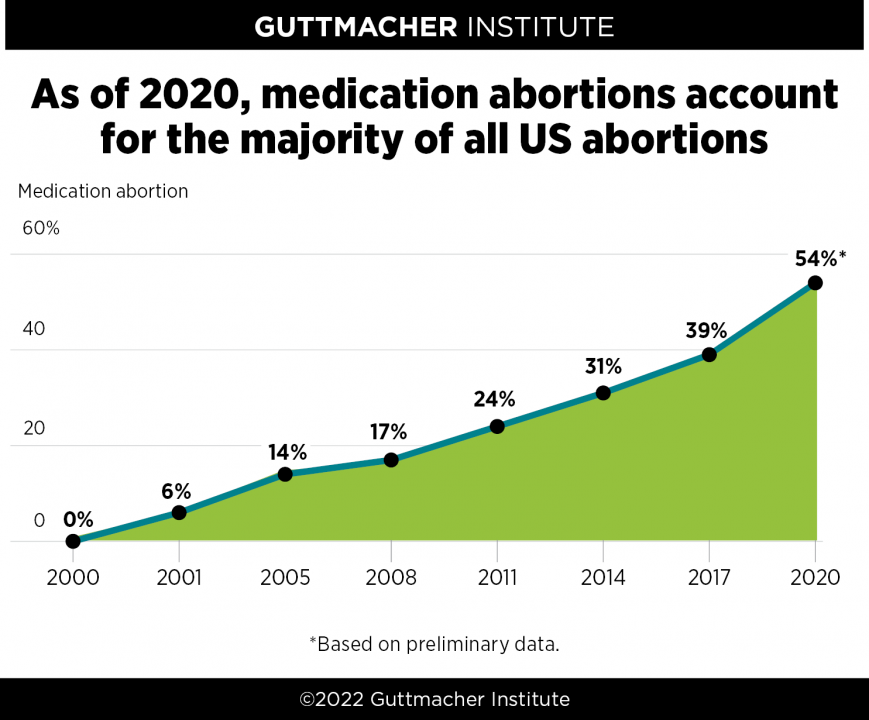 Abortion pill makes up majority of all US abortion in 2020 at 54% (Graph: Guttmacher Institute)

The abortion pill regimen is made up of two drugs; mifepristone blocks the natural hormone progesterone in a woman’s body and thins the lining of her uterus, depriving the baby of important nutrients. The second drug in the regimen is misoprostol, an ulcer drug never intended for use during a pregnancy, which causes heavy bleeding and contractions strong enough to expel the preborn child.

The abortion pill regimen has only been approved for use up to 10 weeks of pregnancy (70 days). By the industry’s own admission, abortion pill failure is more likely to occur as gestational age increases, yet the industry openly flouts FDA safety requirements and commits abortions past the FDA’s 10-week limit.

Guttmacher data relies on surveys sent to the nation’s abortion providers, so it tends to be more comprehensive than the data from the Centers for Disease Control and Prevention (CDC), which publishes data provided to it by states that require abortionists to report. Since multiple states with potentially high abortion numbers are not required by state law to report, the latest data published by the CDC showed the abortion pill comprised 44.3% of US abortions in 2019, excluding data from 10 reporting areas.

Guttmacher’s comprehensive national abortion totals are, as of the publication of this article, years behind and only include abortions committed in 2017. A recent survey collecting information for 2019 and 2020 is still underway, the organization claims. However, using the 862,320 abortion number recorded by Guttmacher for 2017, we can estimate that about 465,000 abortions are now being committed annually in the United States using abortion drugs.

For years, the abortion industry has been seeking to expand chemical abortion due in part to a decreasing pool of abortion providers. Recently, the industry pivoted to a ‘no-test’ abortion pill protocol, which removed the requirement for important exams, ultrasounds, blood work, and tests that could more accurately date a pregnancy and rule out dangerous ectopic pregnancies. The industry then filed a lawsuit against the FDA’s safety regulations (REMS) to remove the in-person requirement to obtain the abortion pill (mifepristone). Then, in December of last year, the pro-abortion Biden-Harris Administration FDA weakened the REMS to permanently allow the abortion pill to be shipped by mail.

The abortion industry, which makes a significant profit from the sale of abortion drugs, has changed course from past mantras that abortion be “safe, legal, and rare” or “between a woman and her doctor.” Instead, the industry now promotes DIY and self-managed abortions, going as far as to promote “advanced provision” of abortion pills (which means a woman would keep the pills on hand before she is even pregnant). In reality, the industry is going backwards, encouraging women to commit dangerous abortions at home. They are off-loading the cost, risk, and emotional impact of this lucrative business onto the backs of women by morphing into little more than abortion drug dealers in brick and mortar facilities and in virtual spaces. The industry can now cut back on medical offices, nurses, staff, monitoring equipment and other important health safeguards to increase revenue and profits from abortion. Instead, they can simply hook up a computer, create a few forms, and open accounts with various pharmacies and shipping companies.

The abortion pill is far from the safe drug it is marketed to be, as it can carry serious risks including incomplete abortions, hemorrhage, serious infections, hospitalization, and even death. Results of a recently released Telabortion study, which implemented extremely stringent safety requirements than would be seen in normal use, revealed that 6% of “known outcomes” from the abortion pill were severe enough to result in emergency room or urgent care visits. That number appears to mirror data from the UK. Using the estimated 465,000 chemical abortions referenced above, this could indicate that potentially 30,000 women per year are seeking care at ERs or urgent care facilities after taking the abortion pill.

As of June of 2021, the abortion pill has tragically ended the lives of nearly five million preborn babies since its approval in 2000. If a woman has experienced a complication from the abortion pill, the drug’s label suggests reporting suspected adverse reactions to the FDA at 1-800-FDA-1088 or www.fda.gov/medwatch.