A researcher with deep connections to the abortion industry recently published an opinion piece in Scientific American, where she made an unchallenged and false claim that the “science is clear” on the safety of the abortion pill. The piece, however, failed to cite the thousands of adverse events associated with the abortion pill which have been reported to the Food and Drug Administration (FDA) as well as other known complications — and there’s probably a reason for this: its author is deeply embedded within the abortion industry.

Author Kelly Cleland is listed by the publication as a researcher with the Expanding Medication Abortion Access Project (EMAA). The EMAA website reveals the organization “seeks to improve the way the medications prescribed for medication abortion care are dispensed in the United States….” While Cleland’s piece is listed as an opinion piece not necessarily endorsed by Scientific American, Cleland’s other pro-abortion ties were not listed in her bio.

In 2017, Cleland told the media, “We’d like to see Mifeprex [the abortion pill] be available in pharmacies like other drugs.” Her wish may soon come true if the FDA lifts the important Risk Evaluation and Mitigation Strategy (REMS) safety measures on the abortion pill. Without the REMS, women or teens may obtain the abortion pill without the longtime required in-person visit to an approved prescriber.

In her opinion piece, Cleland claimed that “actions from the FDA and new research show us that removing the restrictions on medication abortion care has the potential to expand access for many people who need care.” (emphasis added)

What exactly is that research?

It is a series of reports and studies published by the pro-abortion journal Contraception, where Cleland serves as editor and author. It is the official journal of the Association of Reproductive Health Professionals (AHRP) and the Society of Family Planning (SFP). ARHP was originally founded as The American Association of Planned Parenthood Physicians in 1963 by Planned Parenthood president Alan Guttmacher, and has gone through multiple name changes. It was funded “largely by Planned Parenthood, with some small grants from [unnamed] pharmaceutical companies.”

“The July 2021 special issue of the journal Contraception focuses on the restrictions on medication abortion, mifepristone, including its impacts on safety and efficacy, access to abortion, and burdens on patients and providers,” Cleland wrote in Scientific American (SA) — referring to a piece she co-authored and edited.

Additional authors of that research are also deeply connected to abortion:

All but Gómez serve on the Editorial Board of the journal.

Cleland’s opinion piece in SA also linked to additional Contraception studies, one that was funded in part by the Tara Health Foundation (THF), an organization that also happens to fund Cleland’s EMAA organization. THF has been funded by Ibis Reproductive Health, which as recently as January 2020 was funded by abortion pill manufacturer Danco Laboratories. THF also pledged to fund abortion pills on college campuses in California.

Perhaps this is the reason that Cleland’s EMAA organization has sponsored a petition calling for the removal of the REMS on the abortion pill — a fact left out of Cleland’s Scientific American author bio.

Cleland states in her online bio that she is an “allied member of the Abortion Care Network [ACN], and a liaison to the National Medical Committee of Planned Parenthood Federation of America.” In other words, Cleland is directly tied to those who profit from committing abortions, which is slated to make a killing selling deadly abortion pills.

In addition, Cleland claims to have worked as a researcher in the Office of Population Research at Princeton University for 14 years and is a Fellow of the “Society for Family Planning [SFP].” 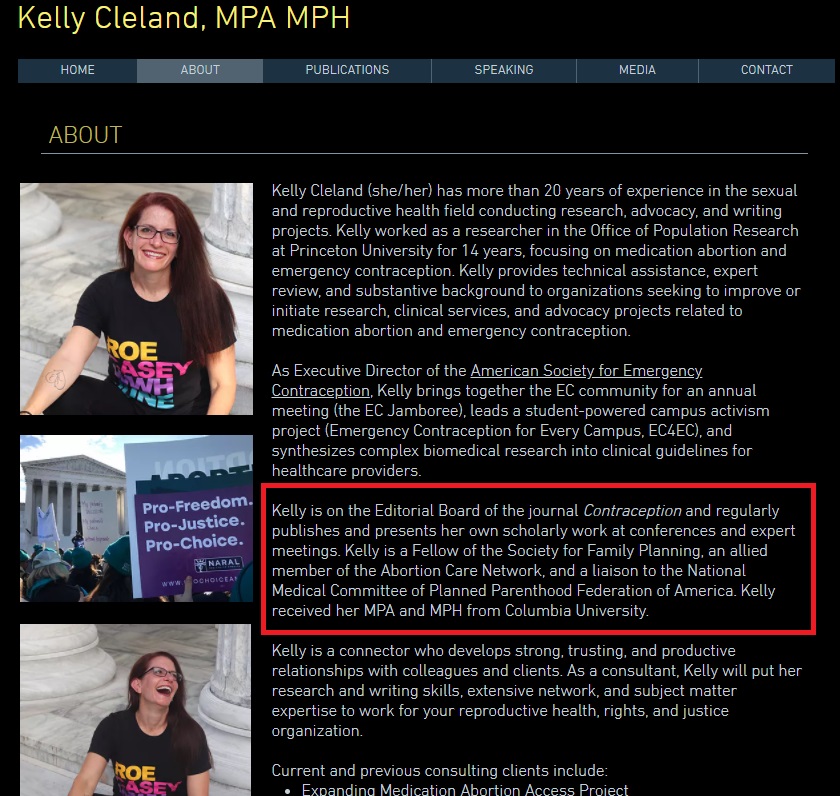 ACN claims to represent independent abortion providers and allies and was founded by leaders of the National Coalition of Abortion Providers and the Abortion Conversation Project (ACN). ACN is clear online that it is “working towards a culture in which abortion care is accepted and commonplace.”

SFP was founded in 2005 thanks to a generous contribution from the Packard Foundation, which also seeded the abortion pill’s manufacturer, Danco Laboratories, Inc., with $14.2 million during the early stages of the FDA approval process. Recently, the Society of Family Planning Research Fund invited researchers to submit proposals to “de-medicalize abortion” and “increase access to medication abortion in the US.”

As previously mentioned, SFP runs Contraception, cited by Cleland as evidence to her claim.

While Scientific American claims that it “look[s] for fact-based arguments” and asks that submissions “link to original scientific research in reputable journals,” in the case of Cleland’s piece, Scientific American allowed its publication to be co-opted by a spokesperson for the abortion industry — who left out a great deal of important context.

First, it is a fact that abortion complications are significantly underreported. And of those complications that are reported, there is a higher rate of complications on the abortion pill, according to Tessa Longbons, a research associate with the Charlotte Lozier Institute. Longbons documented for Live Action News that “while complication data is underreported for some states and completely missing for others, large-scale studies show that chemical abortions had a complication rate four times that of first-trimester surgical abortions.”

In addition, a recent analysis of adverse events reports (AERs) submitted to the FDA by Danco revealed that abortion pill clients experiencing complications are more likely to receive care from emergency centers than from the abortion facilities where they obtained the pills. For that reason, many abortion groups have advised women to claim they are experiencing miscarriages instead of abortions — which would cause the number of complications to be underreported to an even greater degree.

Perhaps Scientific American will seek to publish a rebuttal piece by pro-life groups to set Cleland’s claims straight, but we won’t hold our breath.