The U.S. Food and Drug Administration (FDA) has held in secrecy its process for originally approving the abortion pill two decades ago, and has likewise failed to show transparency in its recent decision to eliminate the in-person requirement for dispensing the abortion pill.

It is unknown what research the FDA relied on to arrive at its decision, but it is possible — even likely — that some of that research was authored by those on the payroll of the abortion pill’s manufacturer, Danco. 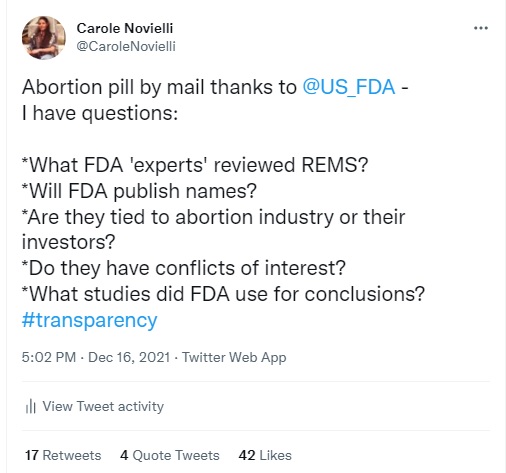 Studies from less questionable authors showed that the abortion pill has potential risks, with some research indicating that a number of women and teens are visiting emergency departments with abortion pill complications.

Just before the FDA’s review of the abortion pill’s safety requirements (REMS) was completed, the pro-abortion organization Advancing New Standards in Reproductive Health (ANSIRH) summarized “published results of U.S. studies of medication abortion that did not involve a clinician dispensing mifepristone in a clinic, medical office, or hospital.” According to ANSIRH, just “[f]our publications met our inclusion criteria.” Read more here and here about who ANSIRH is, what they do in their training of abortionists, and who funds them (including abortion pill manufacturer Danco).

Study #1: Expansion of a direct-to-patient telemedicine abortion service in the United States and experience during the COVID-19 pandemic

This study included participants as young as 10 years old and was published in the journal Contraception, which was founded with a “generous contribution” from the Packard and Buffett Foundations, who are Danco investors.

Authors included Beverly Winikoff, founder and President of Gynuity Health Projects (GHP), which is heavily funded by investors of Danco. Winikoff has served on the board of the National Abortion Federation (NAF), which was at one time directly funded by Danco, as well as the Buffett and Packard Foundations. Winikoff has credited the 9/11 terrorist attacks with saving the abortion pill by drowning out the news of a woman’s abortion pill death.

When Gynuity conducted abortion pill trials, the company received financial support from Ibis Reproductive Health, which was directly funded by Danco for years. After Live Action News exposed this financial conflict of interest, the funding connections were suddenly scrubbed from the Ibis website. Ibis is also currently funded by the Packard Foundation and was previously funded by the Population Council and Gynuity.

In this study, which took place between 2018-2020, the two-drug abortion pill regimen (mifepristone and misoprostol) was dispensed “at a nearby brick-and-mortar pharmacy,” ANSIRH wrote. It was funded by a grant from Fidelity Charitable.

Authors include Dr. Daniel Grossman, a director of ANSIRH who has unethically suggested that emergency room physicians should consider not documenting abortion pill complications to hide information from law enforcement in a potentially post-Roe environment.

While Grossman, an abortionist with multiple conflicts of interest regarding the abortion pill, disclosed that he “served as a consultant to Planned Parenthood Federation of America and the Center for Reproductive Rights,” he failed to reveal that he is Senior Director at Ibis Reproductive Health, which was directly funded by Danco when Grossman began to publish his abortion pill trials.

Additional authors disclosed that they are on the payroll of either Danco or its generic GenBioPro, including Sally Rafie, “a consultant for GenBioPro,” as well as Karen R. Meckstroth and Mitchell D. Creinin, who are “consultants for Danco, Inc.”

Authors with ANSIRH ties included C. Finley Baba, Antonia Biggs, Tanvi Gurazada as well as Sarah Raifman, who previously worked for the Population Council and supported the idea of public colleges passing out the abortion pill.

Author Erin Berry is listed in a separate study as with Center for Reproductive Health Research and Planned Parenthood of the Great Northwest and Hawaiian Islands, while Shelly Kaller is a Senior Research Associate at Bixby.

The study was published by the Journal of Obstetrics and Gynecology (JOG), the official publication of the pro-abortion American College of Obstetricians and Gynecologists (ACOG) — popularly known as “The Green Journal.” ACOG was led into abortion advocacy by population control enthusiasts and is, today, extremely in favor of abortion.

ANSIRH described this mail-order pharmacy study published in Journal Contraception as “an interim analysis” which “includes abortion outcome data for 224 participants recruited in 2020-2021 (5.5% loss to follow-up).”

The work for this study was supported by the the Taylor Fund as well as the Society of Family Planning Research Fund (SFPRF). The Society of Family Planning (SFP) was founded with a “generous contribution” from the Packard Foundation and receives millions from the Buffett Foundation. Authors include the previously mentioned Daniel Grossman, Sarah Raifman, and M. Antonia Biggs as well as Eleanor B. Schwarz a former member of the FDA’s Advisory Committee on Reproductive Health Drugs, and former deputy editor at Journal Contraception. Study author Curtiss Hannum, a nurse practitioner at a Philadelphia abortion facility, once admitted the state’s “previous complaint system… did not facilitate or ensure the investigation of unsafe or illegal practices” in the Kermit Gosnell case.

#4: Telehealth Medication Abortions in the US During the COVID-19 Pandemic

This retrospective analysis of mail-order pharmacy patients in 2020-2021 includes abortion outcome data for 110 participants with almost a quarter (22.0%) lost to follow-up, according to ANSIRH.

ANSIRH also noted that “17% of cases where abortion outcome was known had a pre-abortion ultrasound” — something not currently offered by most online providers. “The protocol involved 3 follow-up contacts: confirmation of medication administration, a 3-day assessment of expulsion and pregnancy symptoms, and a 4-week home pregnancy test,” other measures not necessarily offered in today’s online sales practices.

Among the 110 patients with outcome data, the report claimed that “Five patients (5%) required medical care to complete the abortion, 2 of whom were treated in emergency departments. No patients reported any major adverse events.”

The study was published by JAMA Network Open and supported with “grants from Jess Jacobs, the BaSe Family Fund, the Kahle/Austin Foundation, and the Preston-Werner Foundation.”

Authors included Dr. Ushma D. Upadhyay, an Associate Professor at UCSF’s ANSIRH who advocated a “no test/no touch” approach before the COVID-19 pandemic in 2019. Leah R. Koenig also works with ANSIRH on studies that “focus on testing new models for abortion services,” according to her online bio. She previously worked at the Bill and Melinda Gates Foundation.

The aforementioned UCSF staffer Karen Meckstroth, also an author, is director of Women’s Options Center, an abortion facility which commits abortions up to the 23rd week of pregnancy.