A new study which seeks to elevate self-managed abortions as “safe” has been funded with a grant from a pro-abortion organization. The report, funded in part by the Society of Family Planning, reviewed alleged calls made by women seeking online abortion pills through Women on Web (WoW), an organization started by Rebecca Gomperts. Unsurprisingly given its funding, the study concluded, “There is a public health justification to make these abortions as safe, effective, and supported as possible.”

A self-managed abortion is one which occurs outside the current FDA safety protocol (REMS), in which pills are often obtained online illegally. Live Action News has previously documented the sale of illegal abortion pills by groups such as Aid Access (also founded by Gomperts) who are defying the FDA’s warnings to “immediately cease” dispension of the drugs. The group reportedly filled 2,500 prescriptions in 2018, according to a letter from Aid Access to the FDA. However, a lawsuit later filed by the group noted it had actually shipped 7,131 abortion pills to women in the U.S. between March 30, 2018, and August 27, 2019.

Who funded the study?

Funding for the report came in part from a grant issued by the pro-abortion Society of Family Planning (SFP). As Live Action News previously documented, SFP was founded in 2005 due to a generous contribution from the Packard Foundation, an original investor in the abortion pill manufacturer, DANCO Laboratories, a regular exhibitor at SFP events. SFP members are also part of a team doing a study on TelAbortion. SFP’s founding president, Dr. Philip Darney (a professor at UCSF’s Bixby Center for Global Reproductive Health), undertook studies using methotrexate and misoprostol, which led to the abortion pill regimen. Darney also created the Ryan Program that trains abortionists. 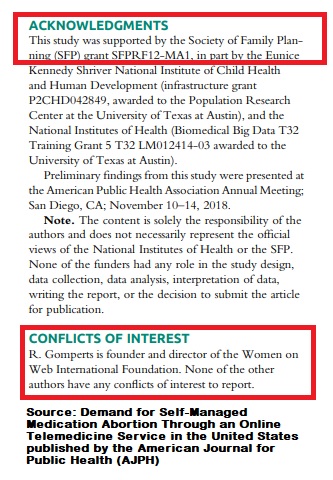 SFP is also funded by another DANCO investor: the Buffett Foundation (ex: 2011, 2014, 2016) — as in billionaire Warren Buffett. Buffett funds the Population Council, a eugenics-founded organization responsible for bringing the abortion pill into the United States. Buffett funds the University of California, granting them $78 million. According to the New York Times, Buffett is the primary financier of the Bixby Center’s Ryan Residency Program at UCSF, which trains abortionists. In 2016, ProPublica revealed that “Buffett’s main academic partner (receiving at least $88 million from 2001 to 2014) has been the University of California, San Francisco…” where several proponents of “self-managed abortion” like Dr. Daniel Grossman work. Bixby receives funding from a number of organizations collaborating to expand abortion — organizations like Packard, according to Bixby’s report.

In 2016, Buffett gave SFP over $8 million as well as millions over the past years, according to a summary from Grantmakers.io: 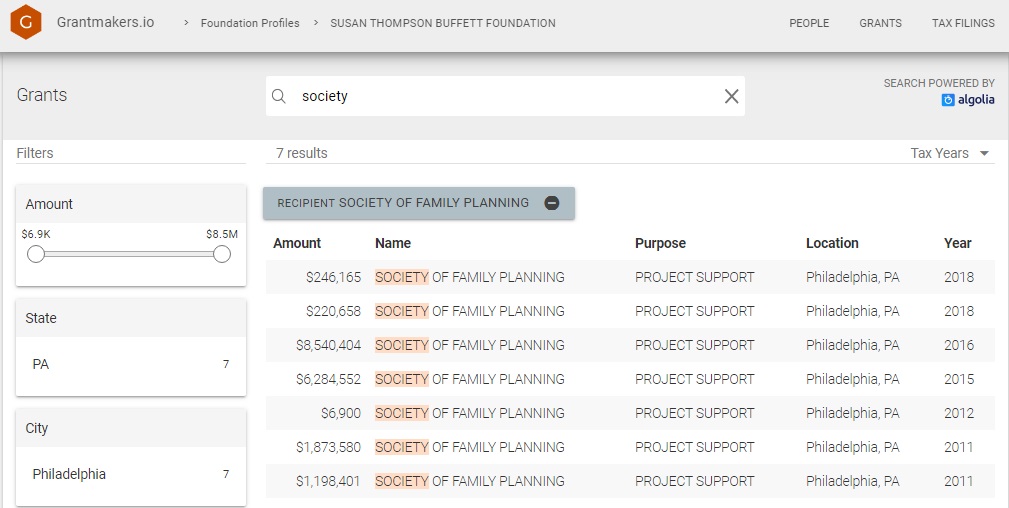 A separate summary from Grantmakers.io reveals millions given to SFP’s Research Fund: 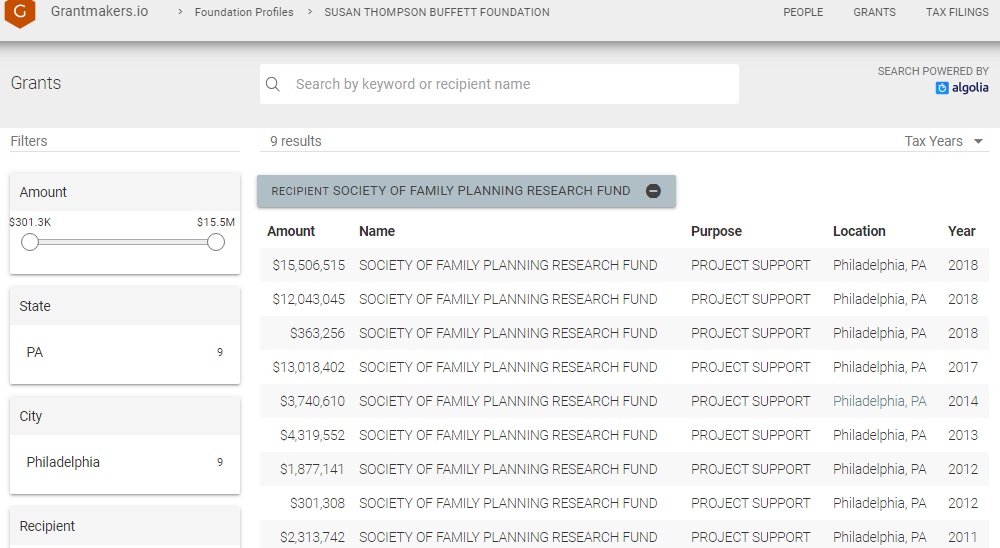 A review of requests allegedly sent to WoW was published in the American Journal of Public Health (AJPH) in October.

What did the study find?

The report examined 6,022 requests from US residents to Women on Web between October 15, 2017, and August 15, 2018. The study purports to show a majority of requests are coming from what they dubbed “hostile states” as opposed to so-called  “supportive states” that have few — if any — restrictions on abortion.

The report found that:

“The most common reason for seeking abortion was simply not feeling able to have a child or another child at this point in life, accounting for 69% of responses, followed by not being able to afford a child (61% of responses),” the report states.

A list of so-called “barriers” women say they faced regarding abortion is depicted in the next table (image below). Note that, by far, the number one “barrier” was: COST OF CLINIC ABORTION.

What’s interesting about this is that rather than reducing the cost of abortions at the facility level, abortion advocates would rather force taxpayers to finance all abortions by repealing the Hyde Amendment, a federal law prohibiting tax dollars from funding abortions. 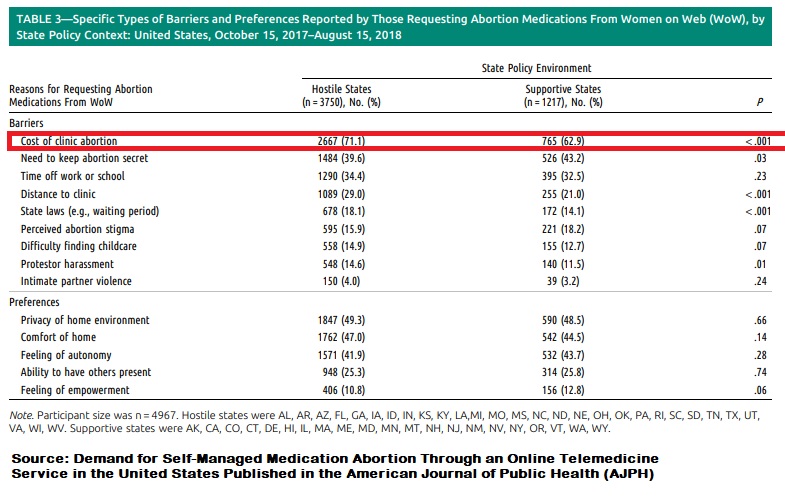 In addition, despite 24 reported deaths from the abortion pill, the report suggests lifting important safety requirements put in place by the FDA under a system known as REMS in order to reduce costs and allow dangerous pills to be sent via telabortion, pharmacy or online.

Where was the study published?

The American Journal of Public Health (AJPH) is the official journal of the American Public Health Association (APHA), which calls abortion a “fundamental right” and opposed reasonable abortion restrictions in Texas, stating in its 2016 annual report, “At the Supreme Court, APHA’s voice and expertise helped win decisions in two notable cases. In Whole Woman’s Health v. Hellerstedt, which challenged a Texas law that effectively restricted abortion access, APHA submitted its own friend-of-the-court brief arguing that “meaningful access to safe, legal abortion is essential to women’s health and a necessary component of any public health system.”

In 2017, APHA boasted that it protected “access to Planned Parenthood.” It also opposed “the Graham-Cassidy ACA repeal bill that would have… defunded Planned Parenthood….” The group has also featured former PPFA president Cecile Richards as a keynote to its annual conferences. 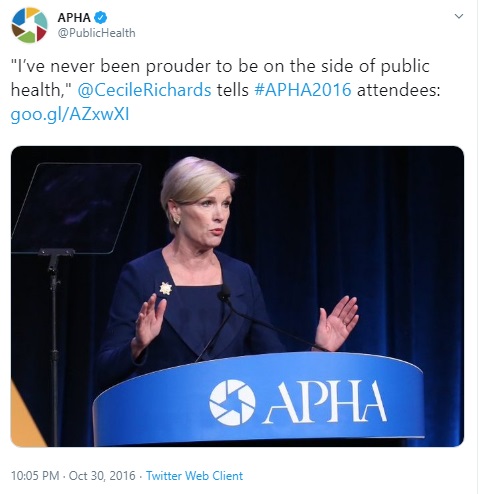 According to APHA’s 2018 annual report, the organization is funded by Planned Parenthood as well as the MacArthur Foundation (which funds abortion groups like IPAS, Guttmacher Institute, NARAL and Planned Parenthood), and the W.K. Kellogg Foundation (yes, the founder of the breakfast cereal company) which supports (2015) the Population Council responsible for bringing the abortion pill into the U.S. 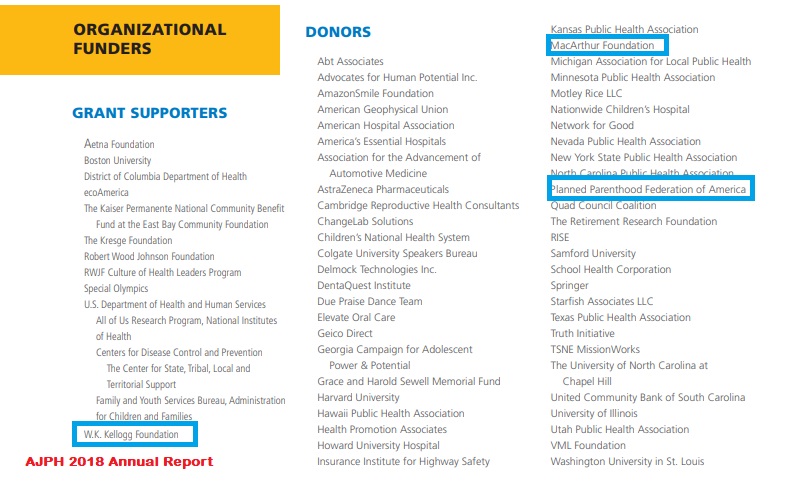 For more information on the abortion pill, visit AbortionDrugFacts.com.