Lawmakers in Washington, D.C., are calling on the Food and Drug Administration (FDA) to crack down on illegal online sales of the abortion pill. According to information from Rep. Michael C. Burgess, M.D. (R-TX) and Rep. Martha Roby (R-AL), the Congressional letter, sent to Dr. Norman Sharpless, Acting Commissioner of the FDA, was signed by 117 members of Congress. It comes on the heels of information showing that Aid Access and Rablon, two foreign companies, have been distributing the chemical abortion drug Mifeprex by mail-order to U.S. customers in violation of the FDA’s safety protocols. Live Action News previously documented a larger push by pro-abortion organizations to lift the FDA’s safety requirements, known as REMS, to expand abortion pill dispension to mail order and online sales, via self-managed abortions.

The Congressional letter urges the FDA to “continue to conduct oversight” of the entities following FDA warning letters to Aid Access and Rablon ordering them to halt dispensing the pills. Lawmakers point out that the pills are prescribed by an abortionist in the Netherlands and filled by a pharmacy in India. A fact sheet published by Charlotte Lozier Institute research organization found that “72 unique websites” were selling the pills online.

An email from the FDA to Live Action News clarified that “Mifeprex may only be supplied directly to healthcare providers who are certified to prescribe Mifeprex….”

The FDA stated the drug is “only available to be dispensed in certain healthcare settings, specifically, clinics, medical offices and hospitals, by or under the supervision of a certified prescriber. It is not available in retail pharmacies, and it is not legally available over the Internet.” They added:

FDA has warned consumers not to buy Mifeprex over the Internet because doing so bypasses the distribution restrictions that are in place to ensure the safe use of the drug. Drugs purchased from foreign Internet sources are not the FDA-approved versions of the drugs, and they are not subject to FDA-regulated manufacturing controls or FDA inspection of manufacturing facilities.

Congressman Burgess expressed his concern, “As an OB/GYN who practiced medicine for nearly three decades, I am concerned about the consequences of unapproved mail-order abortion drugs. The dangerous business that Aid Access is conducting is harmful to the health of American women, who deserve quality health care throughout the course of a pregnancy.”

Rep. Martha Roby stated, “By violating the FDA’s safety protocols, Aid Access and other European mail-order abortion companies endanger the health of American women and their children. The FDA must take decisive action against these illegal activities immediately…. Aid Access circumvents the Food and Drug Administration’s safety requirements, placing the lives of women and their children at risk. We would like to… voice our support for ongoing oversight of this and any other rogue mail-order abortion operation.”

Weeks ago, the FDA updated its adverse events report through 2018, documenting “24 deaths of women associated with Mifeprex since the product was approved in September 2000….” The FDA also noted additional adverse effects in the thousands. Under 2016 changes, the drug’s manufacturer, Danco, no longer has to report non-fatal adverse effects, so we can only imagine what the number really is.

Live Action News previously documented that Danco itself is incredibly secretive about its stakeholders and controlling parties, who (from the limited information we can glean) appear to stand to gain financially from a broad abortion pill expansion. And a previous Live Action News report revealed that the FDA recently approved a generic version of the abortion pill Mifeprex known as GenBioPro. 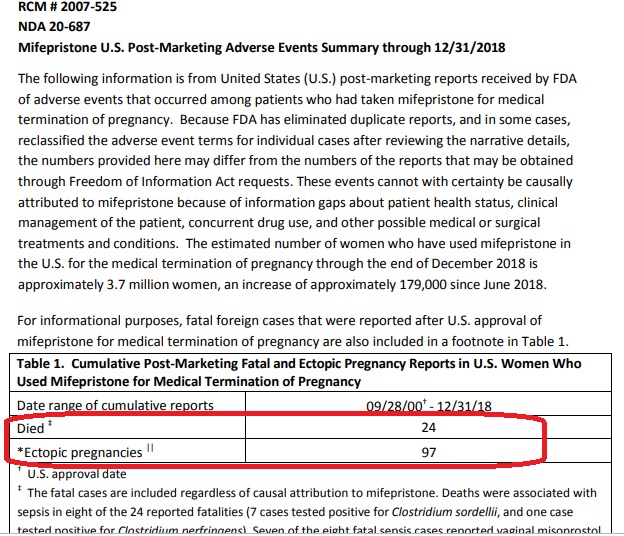 In an e-mail exchange with Live Action News, FDA officials assured us that, “FDA monitors sponsors’ compliance with REMS, including assessment evaluations and on-site inspections. In addition… Mifeprex is not legally available over the Internet. The agency is aware of media reports regarding the sale of unapproved mifepristone in the U.S. through online distribution channels and is actively evaluating the reports in order to assess potential violations of U.S. law.”

An FDA representative told Live Action News, “The agency is aware of media reports regarding the sale of unapproved mifepristone in the U.S. through online distribution channels. We assure you that the agency is extremely concerned about the activities described in these reports and is actively evaluating the reports in order to assess potential violations of U.S. law. As I’m sure you understand, however, the agency is unable to discuss potential or pending investigations, if any such exist.”

Full text of the Congressional letter can be found here.