In the early days of legalized abortion, unscrupulous abortion profiteers at brick-and-mortar facilities quickly attempted to cash in on the burgeoning abortion business. Something similar is happening today with the unregulated abortion pill industry.

Decades ago, as states began to legalize abortion, even some in the media could see this industry could not be trusted to look after the safety of women. A series published in 1978 by The Chicago Sun-Times proved this theory true when undercover reporters at the paper stepped up to investigate the new terrain of brick-and-mortar abortion facilities. Today, due to lax regulations, the potential for those same dangers exists inside the cyber abortion industry.

In the 1970s, the Chicago Sun Times called the race for increased abortion an “abortion derby.” According to the Sun Times’ series, abortionists would “compete” to see who could commit the most abortions.

“For the abortion profiteers, there is money to be made and no time to waste,” the paper wrote.

Authors detailed how some staffers were paid a commission to probe a patient’s “fears and misgivings.” They noted how abortion facility telephones – used by counselors to convince women to purchase abortions – were the “most valuable single tool of the abortion trade.”

According to a former hotline worker, no counseling was offered. “What we were doing there is selling abortions. We got no training except in what not to say. How not to use words like ‘fetus’ or ‘kill’ that might scare the customers away. Don’t mention complications.” 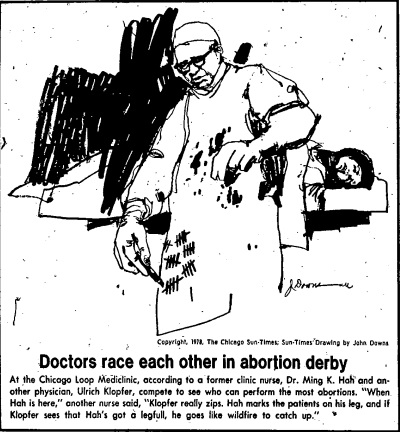 Today, the race to increase abortion pill use mirrors the “abortion derby” days but goes further, keeping women in the dark by deceptively marketing abortion pills under euphemisms like “missed period” pills. In addition, the abortion pill is falsely sold as “safer than Tylenol,” which will feel like a “heavy period.” However, testimonies from multiple abortion pill clients contradict that claim’ they report experiencing severe pain and discomfort, with several seeking care at emergency facilities.

There is no denying how the virtual industry is making a financial killing from abortion pill sales. Virtual abortion enables abortion facilities to increase profits by eliminating facilities and staff, and by drastically reducing the time spent with clients. A Texas abortion chain even marks up the cost of the abortion pill regimen (which can be purchased for under $100) by charging clients four to five times more.

Dr. Jamie Phifer, founder and medical director of Abortion On Demand (AOD) acknowledged  “per patient cost is relatively low” — so low that rather than cut the cost to abortion clients, AOD donates “60 percent of our profits to Keep Our Clinics of the Abortion Care Network.”

READ: Pro-life landlords: Abortion pills could be sold on your property without your knowledge

The legal brick-and-mortar facilities investigated by the Sun Times failed to offer critical post-operative care and were reportedly incompetent at record-keeping. Authors of the “Abortion Profiteers” series also called the state’s regulation of these abortion facilities “slipshod,” noting that the health “[d]epartment… does not even know how many have died from their abortions.”

Today, that kind of fake medical care continues as online abortion pill businesses admit to spending little time with their clients and conducting little to no follow-up.The skytocketing growth of unregulated virtual abortion pill dispensaries is due in part to the Food and Drug Administration’s (FDA) recent move to weaken important safety requirements on the abortion pill and permanently allow the pills to be shipped through the mail. And the FDA made this move despite the fact that there are no federal reporting mechanisms in place to document complications.

When the Sun Times sent undercover reporters to brick-and-mortar facilities, what they found was shocking. “We were hired off the streets as aids, medical assistants, and counselors,” the investigators reported.

“Without checking our references or credentials, four of Chicago’s abortion clinics gave us jobs we were unqualified to hold and tasks we were untrained to perform….They wanted us to remove IVs, administer injections, give psychological counseling and assist in surgery,” they claimed.

The paper took note of how untrained the facility staff seemed to be, finding: 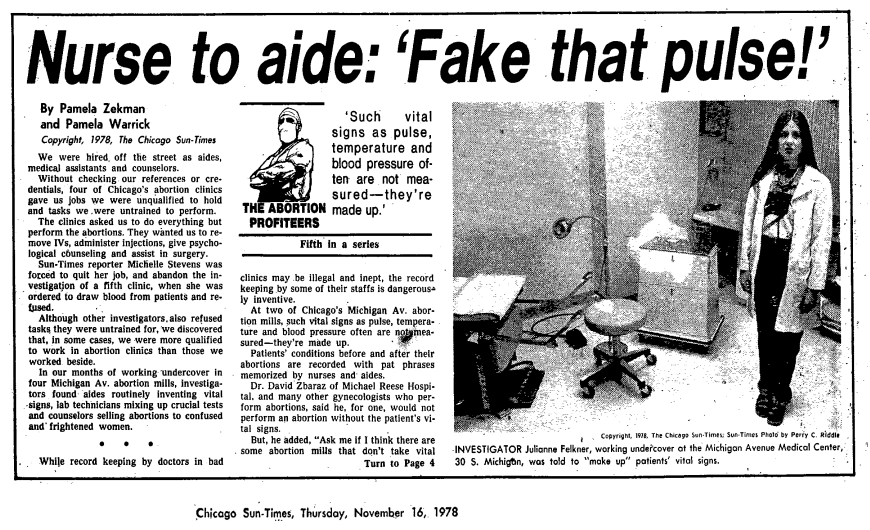 Today, all that is needed to operate a virtual abortion pill dispensary is a computer, a phone, and a partnership with a certified pharmacy. Perhaps that is why, as Live Action News previously documented, the cyber abortion pill dispensary Choix Inc. is operated in part by “engineers” as well as “nurse practitioners,” according to Ms. Magazine. Another dispensary – Hey Jane – was co-founded by a former marketing manager who once “founded, built and managed an electronic music blog,” along with a co-founder who was formerly Senior Manager at UberEATS.

In the early days of legalized abortion, those who operated abortion facilities ranged from used car dealers to casket salesmen. Today, in a new cyber terrain, it seems as if history is repeating itself with an abortion pill pharmacy in Michigan operating from the same address as a used car dealership.

Meet the biggest profiteers of Chicago’s multimillion-dollar abortion business. One used to sell cars. Another sold caskets. Two sold ‘welfare’ medicine. They all jumped on the bandwagon to make a killing, selling abortions on the Magnificent Mile…. They pay high rents for fancy addresses but cut corners on patient care. They ignore laws, but slip through cracks in the system with savvy defenses. They stay in the business by staying a step ahead of the law.

Recently, pro-life researcher Lynn Mills discovered that the American Mail Order Pharmacy (AMOP), which dispenses abortion pills, exists in the same building and at the same location as a used car dealership. Both businesses are owned by licensed pharmacist Samuel Awada. A sign on the property visible from Google Street validates this fact. AMOP is shipping the abortion pill for Planned Parenthood as well as several virtual abortion pill dispensaries.

According to investigators at the Chicago Sun Times, in the 1970s, abortion “[l]aboratory technicians are so rushed, or so incompetent, that women with negative blood can be lost in the crowd, and their Rhogam shot may be forgotten.”

“For centuries women with Rh-negative blood carrying Rh-positive babies suffered terrible risks to their own lives and those of their future children. Now, thanks to a special serum called Rhogam, these women can deliver their babies or terminate their pregnancies without risking the lives of future children,” the paper also wrote, noting that at several abortion facilities the procedures are so “rushed” that Rh-negative clients were not given Rhogam shots.

Today, women receiving the abortion pill are similarly at risk. Well before the COVID-19 pandemic, the abortion industry rolled out a “no test” abortion pill protocol, enabling abortion profiteers to dispense the drugs while conducting no lab tests or ultrasounds beforehand to determine gestational age or rule out ectopic pregnancy. The FDA’s REMS safety requirements specifically require abortion pill prescribers be able to properly diagnose an ectopic pregnancy. The no-test protocol also no longer requires abortionists to check whether a pregnant woman is Rh negative, which can affect future pregnancies.

The skirting of heath regulations as reported by the Chicago Sun Times in the 1970s is also reminiscent of today’s abortion industry, which is openly flouting important abortion pill safety requirements imposed by the FDA. The Sun Times notes that the Water Tower Reproductive Center abortion facility, operated by abortionist Arnold Bickham, skirted health code requirements to save money. They claim this may have led to the failure to discover that one abortion client had an ectopic pregnancy, which led to her death.

Live Action News previously documented how brick-and-mortar abortion facilities — like Whole Woman’s Health (WWH), which has a long history of failed health inspections — are jumping into the lucrative mail order abortion pill business. With scant safety regulations overseeing online abortion sales, women may never know the poor health record of virtual abortion businesses they contact. Because abortion profiteers advise women to present to the emergency room and lie if experiencing abortion pill complications, we will likely never know the true number of deaths for which the abortion industry is responsible.