At one point in time, journalists in mainstream media believed that the abortion industry was deserving of more scrutiny than it has today. In the late 1970s, reporters and researchers staged a five-month investigation into Chicago’s “thriving abortion business,” headed by the Chicago Sun-Times and the Better Government Association. An AP report quoted the paper’s reasoning for the expose: “Our purpose was not to re-examine the morality of abortion – we favor legalized abortion – but to determine whether women were receiving the safe, competent care the Supreme Court had determined was their legal right.”

In the first release of the series, titled, “The Abortion Profiteers: Making a Killing in Michigan Ave. Clinics,” the authors made the following claims: 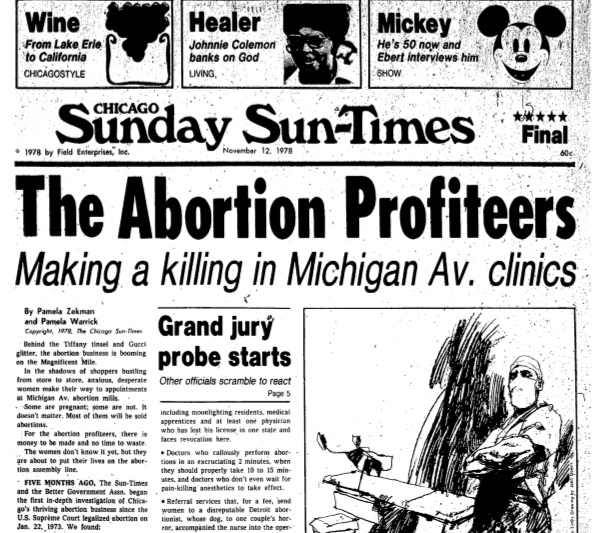 Authors detailed how some staffers were paid a commission to probe a patient’s “fears and misgivings.” They noted how abortion facility telephones – used by counselors to convince women to purchase abortions – were the “most valuable single tool of the abortion trade.”

“We don’t tell them it hurts,” the report claimed one undercover counselor was told. “Don’t answer too many questions because the patient gets too nervous and the next thing you know they’ll be out the door.”

“Look, no matter how you put it, we’re in the business of selling abortions,” they quoted one hotline operator as saying.

The authors discovered other serious issues with patient care:

In a later report, the authors called the state’s regulation of these abortion facilities “slipshod” and noted that the health “[d]epartment… does not even know how many have died from their abortions.” In subsequent reports, the paper referred to the investigation as their “abortion racket series” exposing how government agencies tasked to protect the taxpayers failed abysmally, allowing abortion profiteers to scam their agencies by fraudulently obtaining Medicaid dollars to pay for abortions. “The Illinois Public Aid Department has improperly asked for – and received – more than $1 million in federal Medicaid funds for abortions performed on poor women…. [P]reliminary findings of a HEW [Health, Education, and Welfare Department]  audit show that the state “improperly” billed HEW more than $1 million for 12,600 abortions not eligible for federal financing under the Medicaid program,” authors wrote, according to a November 29, 1978 reprint of the Sun-Times article by the Colorado Springs Gazette Telegraph.

Today, cases of Medicaid fraud, unqualified or unlicensed abortionists, and abortion quotas are commonplace and reveal that little has changed when it comes to trusting those who profit from abortion. Instead of the media protecting this shady industry, they should — as these journalists from the Chicago Sun-Times did — investigate and expose it.