Today’s abortion-friendly media rarely questions claims made by members of the abortion industry, but that wasn’t always the case. Live Action News previously detailed the Chicago Sun-Times’ expose of the abortion industry in 1978. But there’s more to the story. The Sun-Times also did some digging into local abortionists for their report, “Meet the Profiteers,” a five-month investigation which sent reporters and researchers undercover into Chicago’s “thriving abortion business.”

In the “Abortion Profiteers” series part two, the authors begin, “Meet the biggest profiteers of Chicago’s multimillion-dollar abortion business. One used to sell cars. Another sold caskets. Two sold ‘welfare’ medicine. They all jumped on the bandwagon to make a killing, selling abortions on the Magnificent Mile…. They pay high rents for fancy addresses but cut corners on patient care. They ignore laws, but slip through cracks in the system with savvy defenses. They stay in the business by staying a step ahead of the law.”

The “profiteers” they featured included: 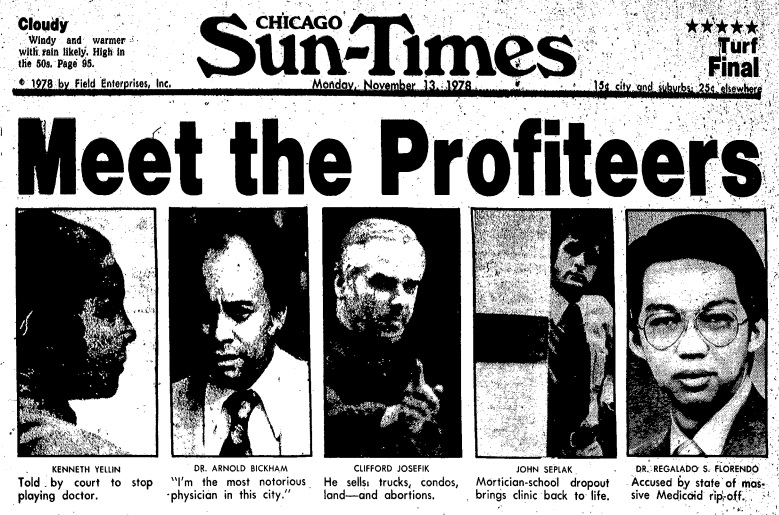 “Two former car salesmen, a mortician-school dropout, and two doctors adept at garnering large sums of Medicaid benefits have been identified by the Chicago Sun-Times as the biggest abortion profiteers in the city,” reported UPI in November 1978. 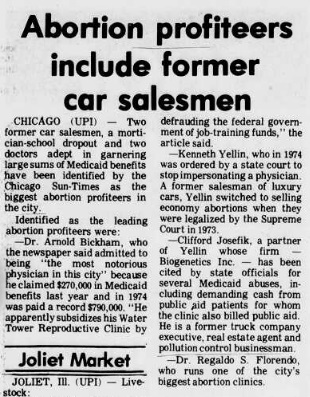 The Sun-Times report noted a litany of unethical and questionable behavior from these abortion facility operators, even accusing Yellin — who is not a doctor — of “impersonating a physician, performing illegal abortions, reckless conduct and theft by deception, for telling women they were pregnant when they weren’t” and was accused of sexual battery for allegedly “squeezing a woman’s breasts during one of the many ‘examinations’ he performed as ‘Dr. York’.” The Sun-Times quoted Josefik, Yellin’s business partner, as stating in a staff meeting, “We have to sell abortions. We have to use all the tactics we can because, just like my other business, we have competition.”

When abortionist John Seplak overheard a staffer saying she might refer an abortion patient to another facility when they were closed, he allegedly threatened, “You refer them anyplace else and I’ll cut your t*ts off!”

Part three of the series is entitled, “The Abortion Lottery,” and reads like it could have been written today:

[…W]omen entrust their bodies to doctors who may be mere mechanics on the abortion assembly line. They may be moonlighting residents, general practitioners, with little or no training in women’s medicine, or even unlicensed physicians. While slick clinic brochures promise only board-certified obstetrician-gynecologists, few have earned even that accreditation. These doctors rarely tell patients their names. To many, patients are not people, they are profits. 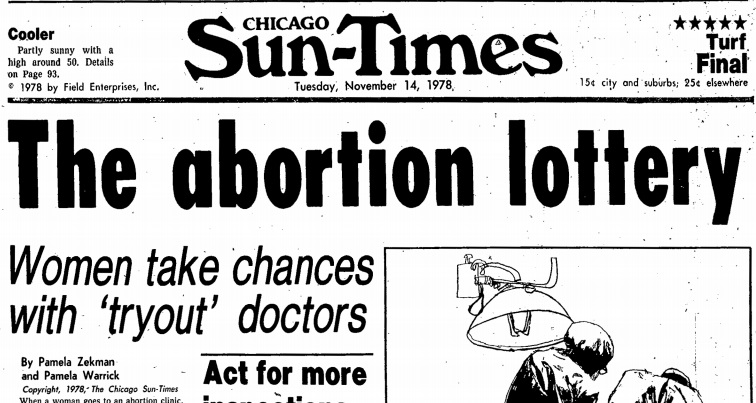 The authors claim they spoke with several patients of these abortionists. There were “women who were awakened nights after their abortions by chills and fever, uncontrolled bleeding, and painfully debilitating cramps. Some had dead tissue left inside them. Others had massive infections, perforated bowels, or punctured uteri. Some ultimately underwent complete hysterectomies….”

“… [T]he doctor had no idea what he was doing. I was just a guinea pig,” one patient told the reporters.

A patient of Dr. David Aberman allegedly told the paper, “He didn’t say a thing to me when he walked into to do the abortion except, ‘What do we have here? Ah- too much weight.'” She added, “He gave me no anesthesia, not even a local. I had tears running down my cheeks. And then, right in the middle of performing the abortion, he yelled to the nurse, ‘This lady is not pregnant.'” 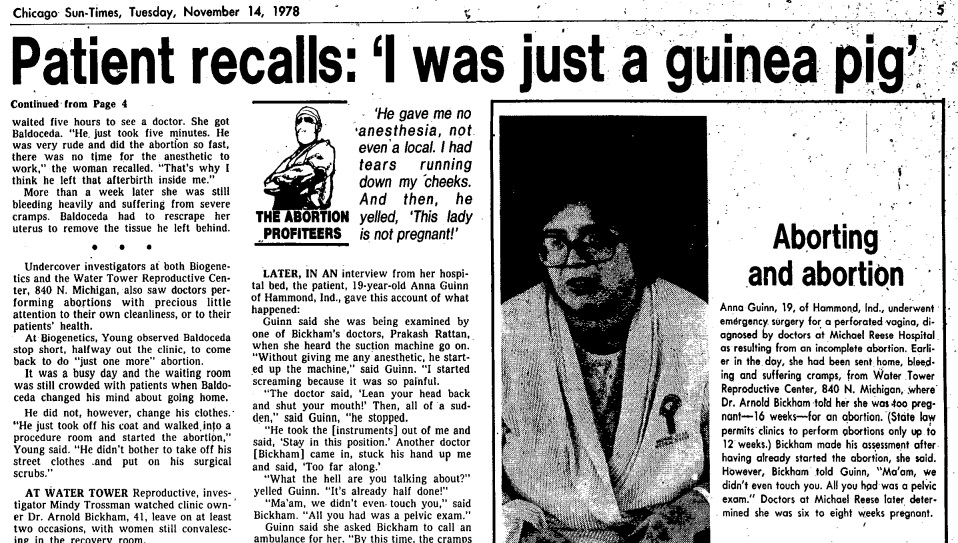 One of the paper’s investigators claims she watched an abortionist named Carlos Baldoceda operate on a patient while he received a sensual massage from the nurse assisting him. “He was laughing, the patient was moaning,” she stated.

Patients described a cold and rude demeanor by these abortionists, each one saying little to nothing when they entered the room of the nervous patients, and one by one suctioning out their babies in an assembly line method. The paper’s undercover investigators observed reckless behavior, rushed-through procedures, dangerous medical care, even abandoning patients while they were still in the recovery room.

“Sometimes he [Bickham] rushes from abortion to abortion without washing his hands between patients or donning sterile gloves,” the paper reported.

Today, these stores remind us that little has changed inside the abortion industry. Given the horrors women can face, perhaps it’s time for mainstream journalists to expose the corrupt abortion industry again.