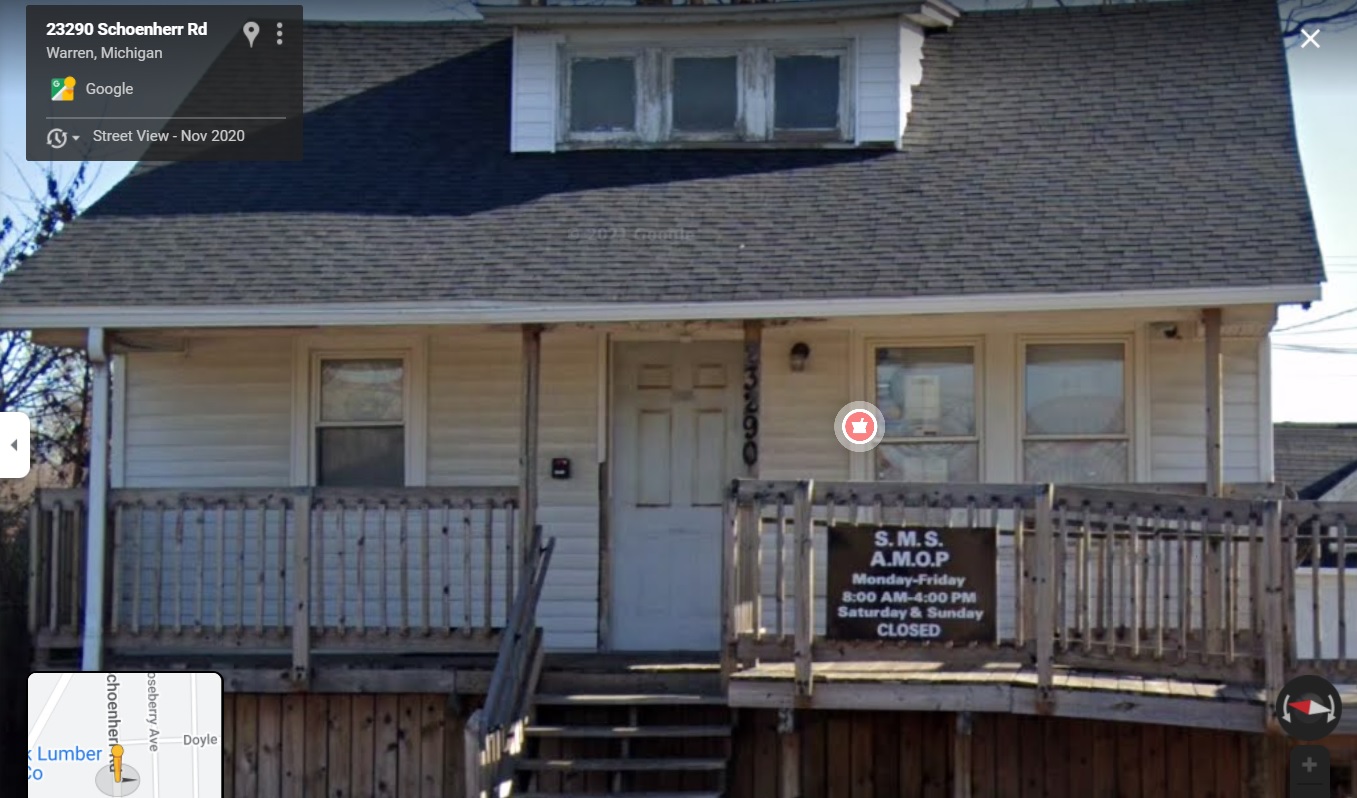 An abortion pill pharmacy shipping drugs across the United States on behalf of virtual abortion pill dispensaries and Planned Parenthood appears to be operating out of the same facility as a used car dealership.

According to pro-life researcher Lynn Mills, tax records on file with the City of Warren, Michigan, show that the American Mail Order Pharmacy (AMOP) and Sams Motor Car Sales (SMS) are owned by licensed pharmacist Samuel Awada, and are both located inside the same location, a building constructed in 1924. A sign on the property visible from Google Street validates this fact.

Recent published interviews reveal that multiple unregulated virtual abortion pill dispensaries are utilizing AMOP in the ever-expanding ‘wild west’ of abortion pill distribution. All that is needed for these businesses that mail abortion drugs to women and minors in various states is a computer, a telephone, and a partnership with a pharmacy like AMOP. The new frontier of mail order DIY chemical abortion is reminiscent of the early days of decriminalized abortion following Roe v. Wade, when unscrupulous abortion profiteers — including used car salesmen — waded into the abortion business, leaving injured and sometimes dead women in their wake.

According to the Michigan Board of Pharmacy, Awada and AMOP are both listed as holding current licenses. AMOP’s “privacy policy” located at the company’s website verifies a location at 23290 Schoenherr Rd, Warren, Michigan, 48089. A check of licensed auto dealers at the Michigan Secretary of State’s website reveals that Sams Motor Car Sales has an active and current business license and is operating at the same location as the AMOP abortion pill pharmacy. 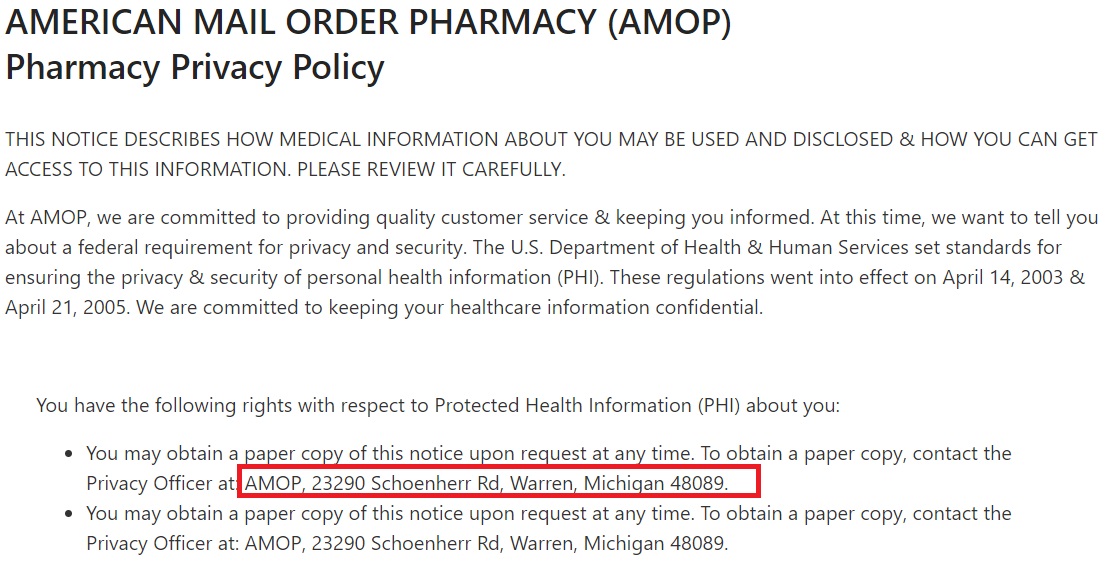 In addition, Planned Parenthood appears to be using AMOP, as indicated by the PP of Metro Washington DC website, which states, “The abortion medications are mailed in a discrete package to your address (the package return address will say the pharmacy name ‘AMOP’ and not ‘Planned Parenthood’) or you can choose to pick them up in the health center.”

AMOP, founded in 2006, was also recently acknowledged for its assistance in a study conducted by Dr. Daniel Grossman, a former NARAL and NAF board member who has been seeking to expand access to the abortion pill. 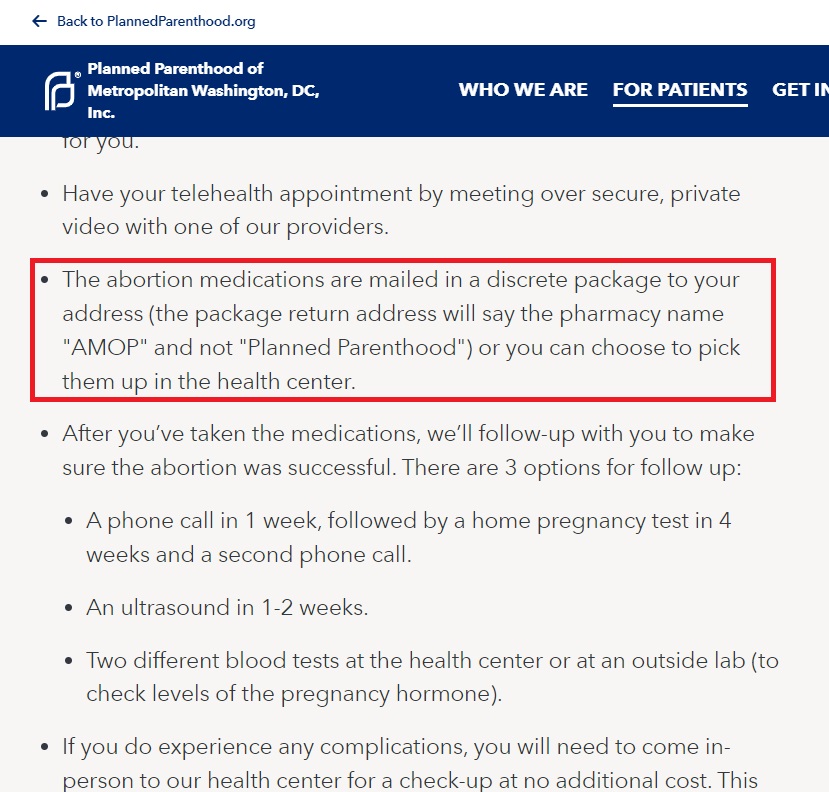 According to a preliminary analysis by the Guttmacher Institute (Planned Parenthood’s former “special affiliate”) the abortion pill has now “crossed the threshold to become the majority of all abortions” committed in the United States. Guttmacher now estimates that chemical abortion pills made up an estimated 54% of all US abortions in 2020. Using reported abortions recorded by Guttmacher for 2017, we can estimate that about 465,000 abortions are now being committed annually in the United States using abortion drugs.

The Food and Drug Administration’s (FDA) December 16, 2021, modifications to safety regulations for the abortion pill (REMS) removed the in-person requirement for abortion drugs, enabling women and minor girls to access the deadly pills virtually, with little to no follow-up. The FDA’s modifications now require “pharmacies that dispense the drug be certified” but does not specify what the certification process entails.

While AMOP and the California-based Honeybee Health are openly shipping abortion pills by mail already, the FDA has yet to publish its pharmacy certification process for Mifeprex online. A ruling by the FDA on that process is expected at any time.

History seems to once again be repeating itself under the latest DIY, at-home abortion pill terrain, with the industry clearly moving backwards by partnering with used car salesmen and by off-loading the cost, risk, and emotional impact of this lucrative business onto the backs of women and teenaged girls. And while the FDA caves to political pressure from the abortion lobby to expand access to the abortion pill, the industry is quickly morphing into little more than a group of abortion drug dealers pushing their deadly pills — sometimes disguised as “missed period” pills — outside brick and mortar facilities or in virtual spaces to entice women and minors to buy their dangerous product.