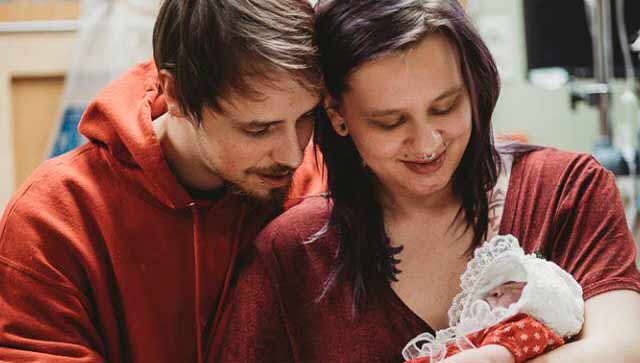 Krysta Davis and her boyfriend, Derek Lovett, were thrilled to be welcoming a baby into their family after previously suffering a miscarriage at 10 weeks. But at 18 weeks into the pregnancy, Davis got heartbreaking news: their baby girl, who they had named Rylei Arcadia, had anencephaly, and would not survive after being born. Despite being given the option to abort, Davis chose life.

Anencephaly is a birth defect in which a baby is missing part of their brain and skull; while there are some rare cases of anencephalic children living into toddlerhood, most will die days after being born, if not moments. Davis chose life for her daughter and carried her for the rest of the pregnancy.

At 17 weeks, Davis said she got a call about the results of prenatal testing they had undergone.

“They called me about my quad screen (a genetic test to determine the risk of birth defects),” she said in an interview with the Daily Advertiser. “And they said it came back abnormal, they suspected a neural tube defect like spina bifida. I went to see a high-risk doctor, and noticed that the nurse was acting strange while checking me. She spent a lot of time looking at Rylei’s head. That’s when they told me it wasn’t spina bifida – it was anencephaly.”

Doctors told Davis and Lovett they could choose to continue carrying Rylei, or they could induce labor at 18 weeks. But they decided to get a second opinion.

“We followed up with another doctor, and we were told that if I carried to term, I could donate Rylei’s organs, and possibly arrange to meet with the kids who get them,” Davis said. “At that moment, Derek and I looked at each other and knew what we were going to do. I may have not been able to take my baby home, but I could maybe use her life to give other mothers the chance to.”

So through the rest of her pregnancy, Davis and Lovett enjoyed the time they had with their daughter. And when little Rylei was born on Christmas Eve, they fell even more in love with her.

“Those big lips, that’s all you could see,” she said. “I thought, oh my gosh, she’s smiling at me. We weren’t sure she was even going to be alive. They laid her on my chest, and I just fell in love. At that point, she was breathing on her own. They delayed the umbilical cord cutting because we were under the impression that she would die when [the] cord was cut.”

Instead, Rylei defeated all the odds stacked against her, living not just for mere moments, but for an entire week.

“There’s no way to describe how amazing it felt. When you go to thinking you’ll only have 30 minutes with your child and you get an entire week,” Davis said to News Channel 9.

Davis said she was immediately in love with her daughter and didn’t notice or care that she could see Rylei’s brain stem. She held her and cried, and focused on the time they had together.

“Just being able to feel her, be so close to her, hear her little sounds,” Davis told the Daily Advertiser. “I am just loving getting to see a little personality come out when I never thought I could. She is turning into her own little person, and I just love it.”

After a week, Rylei passed away and saved two lives by donating two heart valves, while her lungs will go to anencephaly research, to help other babies like her. “Rylei has now left a legacy and is a hero because of it,” Dawn Mazurek, Hospital Development Coordinator with Tennessee Donor Services, said to News Channel 9.

Davis and Lovett had pictures taken by Clarissa Tilley, a Tennessee photographer, before Rylei passed away. And her short life affected everyone she came in contact with. Despite their sadness, they will always have memories of their precious girl.

“Her favourite band was Fleetwood Mac,” Davis said to the Courier Mail. “It was amazing feeling her kick. I didn’t know if she would move around at all but we found out, as she moved a lot. Every time I look at the reminders of her, I treasure the moments. I still get a couple of tears coming down — they are perfect moments.”