Olivia’s journey begins at the moment of fertilization and ends when she’s ready to be born. This includes the third trimester, when the preborn child can survive outside of the womb. Yet thousands of late-term abortions are committed during the third trimester each year.

Baby Olivia exhibits behavior in the third trimester that will closely mirror her behavior after being born. At 26 weeks gestation, she is startled by loud noises and is practicing breathing. Her eyes also produce tears, and her sense of smell is fully developed. Just one week later, at 27 weeks, she reacts to light outside of the womb and recognizes familiar voices. In the last month of pregnancy, she even has flavor preferences based on the foods her mother eats. 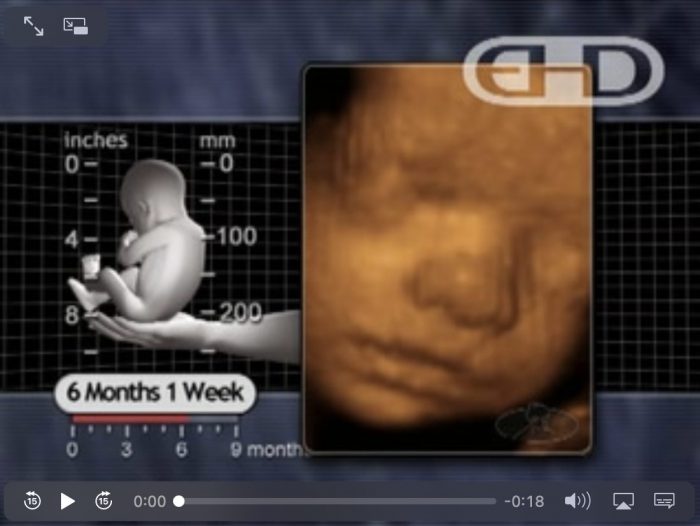 READ: How third trimester babies prepare for the outside world

Research shows that a preborn child likely feels pain by the end of the first trimester, so a preborn baby in the third trimester of pregnancy can most definitely feel pain.

The most common abortion procedure committed in the third trimester is an induction abortion. As the baby is capable of surviving outside of the womb, the abortion begins with a fatal shot of either digoxin or potassium chloride to the baby’s heart or head. This is intended to cause cardiac arrest, and then death.

If the baby isn’t born intact, however, the abortionist will have to convert the procedure into a D&E, where he will use clamps and forceps to dismember the baby, piece by piece.

An induction abortion comes with significant risks to the mother as well. A woman can suffer hemorrhaging, lacerations, and perforations to the maternal organs. There is also a risk of trauma to the cervix, which can impact her ability to safely carry a child to term in future pregnancies. The later the abortion, the greater the risk of substantial injury.

With Baby Olivia showing the world that preborn children are living human beings, she’s also sending another important message — a message about the violence and cruelty of killing through abortion.