Having long ago abandoned the idea that abortion should be “rare,” the Guttmacher Institute, Planned Parenthood’s former “special affiliate,” has published a new “policy review,” titled, “Ensuring Access to Abortion at the State Level.” This report reveals right away — in case there was any doubt — that the pro-abortion movement has no desire to help decrease the number of abortions. “As the country looks ahead to a potential future in which the Supreme Court retracts federal protections, states can take stock of their existing policies and consider what is needed to protect or expand access to abortion care,” the document begins. And here are its goals:

Report authors Elizabeth Nash and Megan K. Donovan write, “[E]fforts in a handful of states have shifted focus from the Roe viability framework to a broader model that seeks to prevent the government from interfering in an individual’s ability to access abortion care throughout pregnancy.”

Examples are included in the image below: 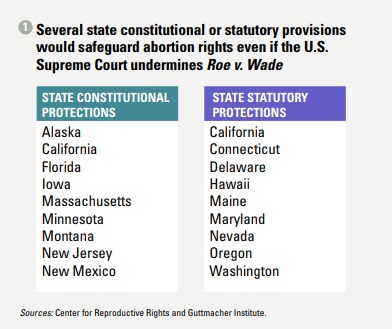 For years the abortion industry has attempted to do away with the federal Hyde Amendment which prohibits taxpayers from funding most abortions. However, states can use tax dollars to pay for abortions, and Live Action News previously documented that more than half of abortions in Medicaid-coverage states are taxpayer-funded. Live Action News reports indicate that in several states including New Mexico, California and New York, taxpayers are forced to fund abortions — even late-term abortions committed for any reason the woman desires. Tax dollars then increase the number of abortions the taxpayer is forced to finance, many of which are repeat abortions.

Guttmacher wants lawmakers to require that “private insurers… include abortion as a covered service….”

Recently, the Trump administration issued a new rule to make certain consumers aren’t forced to pay for abortion coverage if they don’t want to. Planned Parenthood and other abortion vendors are crying foul.

Pro-life groups argue that when women are given a chance to see ultrasound images of their preborn children, or presented with information about abortion risks and complications as well as fetal development (something Planned Parenthood fails to put forth accurately), they are more likely to choose life for their babies.

Clients rejecting abortion is bad for business, which might explain why Guttmacher labeled waiting periods and informed consent measures as “misleading, irrelevant and erroneous information,” and praised measures that allow “[abortion] providers to ignore state laws” or ” prohibit political interference in any kind of health care, including abortion.”

Live Action News and Live Action have documented how vulnerable groups can be victims of sexual predators taken to the abortion industry, including Planned Parenthood. Planned Parenthood has turned a blind eye to child sexual abusers and sex traffickers by failing to report sexual abuse in direct violation of Title X and other federal requirements.

Abortion was sold to the public with wholly false, inflated statistics regarding how many women allegedly died from illegal abortion. Once decriminalized, the marketing of abortion changed to “safe and legal” despite numerous incidents of emergency calls, deaths and injuries.  The number of doctors committing abortion has now shrunk due in part to license revocations or refusals to commit the procedure, so Guttmacher suggests mandating abortion training into law while lifting safety requirements.

States interested in expanding the pool of abortion providers can start by ensuring they do not subject clinics and providers to unnecessary regulations…. One possible way to address this lack of training is to mandate it in state law…. States could go further by requiring training in abortion care for a wider range of physicians, such as family medicine and internal medicine doctors…

Guttmacher takes it a step further and suggests that lawmakers “allow advanced practice clinicians (APCs) to provide medication and surgical abortion care in the first trimester.”

Despite deaths and hospitalizations, abortion advocates like Guttmacher, Planned Parenthood, and others are pushing for unrestricted access to the abortion pill. Guttmacher writes, “Telemedicine is a safe and effective way of expanding access to medication abortion…. policymakers must also mandate that Medicaid and private insurance plans not only cover abortion care, but also cover telehealth services to the same extent as in-person care.”

On self-managed abortion, the report suggests:

…[Th]e risk of criminalization remains significant…. states can remove or amend these laws to prevent their use against individuals who self-manage abortion.

Lest you think these abortion profiteers are willing to relinquish profits from “home” abortion, think again. In a separate report, Guttmacher made clear that “clinic-based providers… play a role in supporting people who self-manage,” which”would require payment and reimbursement systems that compensate providers adequately for providing these services…”

As abortion is “core” to Planned Parenthood’s mission, it appears that Guttmacher’s strategy to expand abortion is just more of the same.