Planned Parenthood’s ongoing history in failing to report suspected child abuse (which Live Action News reported about here and here) could result in the organization losing millions of taxpayer dollars under the federal Title X Family Planning Program — according to a federal office.

In December 2016, the Obama Administration approved a new Department of Health and Human Services rule, which, in essence, prohibits lawmakers from defunding Title X grant recipients simply because they perform abortions.

But what happens if a Title X grant recipient fails to follow laws requiring them to report child abuse? Shouldn’t this — and couldn’t it — disqualify such a provider from receiving Title X funding?

The Title X Family Planning Program is administered by the Office of Population Affairs (OPA), Office of the Assistant Secretary for Health (OASH), within the HHS. According to a Congressional Research Service Report, in 2016, $286 million was allocated for Title X. 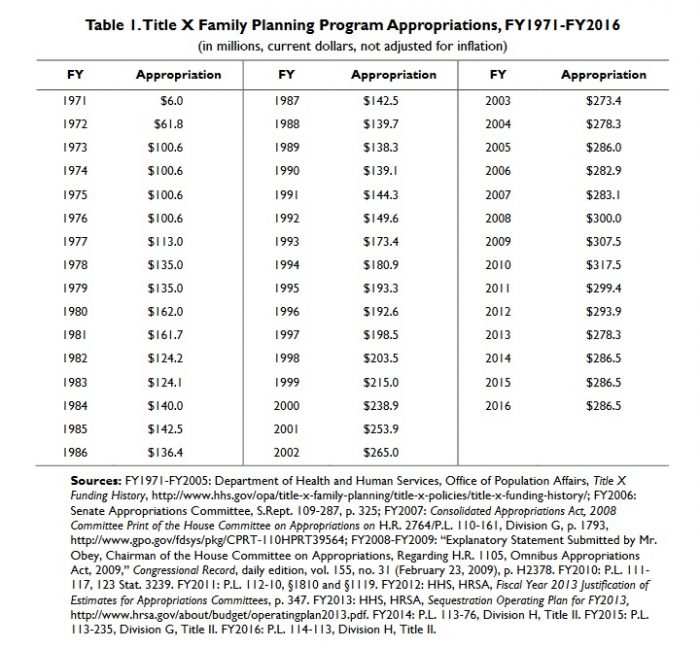 On April 25, 2014, OPA released Title X Family Planning Guidelines, which clarified that “all Title X providers must comply with State laws requiring notification or the reporting of child abuse, child molestation, sexual abuse, rape, or incest.” This was reiterated in the 2014 Program Requirements for Title X Funded Family Planning Projects, which states:

Notwithstanding any other provision of law, no provider of services under Title X of the Public Health Service Act shall be exempt from any State law requiring notification or the reporting of child abuse, child molestation, sexual abuse, rape, or incest.

This notice is also clearly outlined on the HHS Office of Population Affairs website:

None of the funds appropriated in this Act may be made available to any entity under Title X of the Public Health Service Act unless the applicant for the award certifies to the Secretary that it encourages family participation in the decision of minors to seek family planning services and that it provides counseling to minors on how to resist attempts to coerce minors into engaging in sexual activities.

Notwithstanding any other provision of law, no provider of services under Title X of the Public Health Service Act shall be exempt from any State law requiring notification or the reporting of child abuse, child molestation, sexual abuse, rape, or incest.

According to a March 2016 report by the Congressional Research Services, reporting suspicion of child sexual abuse is expected of Title X providers. The report stated that, “Although minors are to receive confidential services, Title X providers are not exempt from state notification and reporting laws on child abuse, child molestation, sexual abuse, rape, or incest.”

How Planned Parenthood Has Skated by With Reminders

Planned Parenthood has violated this requirement time and time again, yet they continue to be funded. After Live Action’s investigations showed Planned Parenthood potentially covering for sex traffickers, the deputy secretary for the Office of Population Affairs simply reiterated the mandatory requirement instead of defunding the abortion giant.

The bias in the Office of Population Affairs was clearly seen on March 3, 2011, when Deputy Secretary Marilyn Keefe moderated a webinar with Title X recipients. In the transcript posted online, Keefe calls Live Action an “anti-choice” group, and suggests that the undercover videos might have been “doctored and complete or taken out of context.” (Interestingly, this seems to be a favorite claim of Planned Parenthood and friends whenever the abortion chain is caught in the act of doing potentially illegal things.)

The transcript of Keefe’s statement indicates that some of the Planned Parenthood centers caught in the undercover sting were Title X clinics:

I know many of you are aware that there have been recent press reports related to efforts by the anti-choice group Live Action to target Planned Parenthood centers…. Planned Parenthood has been cleared and in almost [sic] instances the conversations reflected appropriate policies and procedures and were in compliance with relevant state and federal laws. In the cast [sic] of one New Jersey clinic, the conversation was clearly inappropriate and the counselor was immediately fired. This clinic with these Title 10 funds [sic]. There were other videos taken of Title 10 agencies including one in DC and one in the Bronx. There were other encounters at Planned Parenthood clinics that received Title 10 funds that have not been posted…

Keefe later reminded those on the call about the requirements that providers abide by state and federal laws regarding mandatory reporting of child sexual abuse: “Issues related to confidential access to services are inherently sensitive and we want all parties to be reminded of the existing policies as well as to be reminded that there’s a zero tolerance for violations.”

Really? “Zero tolerance”? I guess this is where that whole “doctored video” claim about Planned Parenthood’s violations comes in handy. Keefe continued:

Although the Title 10 program has for more then [sic] ten years had appropriations language added that made it clear the Title 10 grantees are required to be in compliance with state laws regarding notification of the reporting of child abuse, child molestation, sexual abuse, rape or incest, we want to take further affirmative actions to ensure that Title 10 grantees and sub recipients are aware of their specific obligations in these areas and take appropriate and immediate action that complies with their specific state laws. In addition, we at OPA need to be informed of any incident that occurs involving grantees or sub recipients along with any actions that have been taken…

So, OPA wants “to be informed,” but then labels those who expose illegal “incidents” as “anti-choice” and claims their videos are probably “doctored”? Hmm. Interesting.

Keefe then issued an OPA Program Instruction to all Title X grantees reminding them that funding could be at risk:

Title X providers must ensure that policies and procedures are current and reflective of applicable State laws. Failure…to comply with applicable State laws addressing the notification or reporting of child abuse, child molestation, sexual abuse, rape, or incest, or any other form of domestic violence…may result in the disallowance of Title X funds, or the suspension or termination of the Title X grant award. 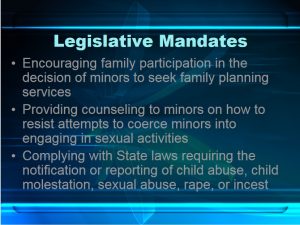 It seems that HHS/OPA is good at reminding, but not so good at actually suspending or terminating grant awards. After all, this wasn’t OPA’s first reminder to Title X recipients that they must comply with the law.

A May 2008 power point presentation conducted by Susan B. Moskosky, Director of the Office of Family Planning/Office of Population Affairs at the HHS, also made it clear that Title X recipients are expected to report child sexual abuse. An HHS memorandum was sent out in 2005, out of concern that “organizations receiving Title X Family Planning program funds may not be fully complying with State laws requiring the reporting of potential sexual abuse, including statutory rape.” The document from the Assistant Inspector General for Evaluation and Inspections states, “OPA informs its Title X service grantees about State reporting requirements for child abuse and sexual abuse through a variety of methods that include written communications, training, and discussions.”

Planned Parenthood Should be Stripped of Its Title X Funding

A state by state summary of the cases can be viewed at Live Action News, here and here. The summaries are tragic and show that time and again, young girls continued to be victimized by their abusers after receiving “services” at Planned Parenthood.

What this shows is that at the very least, recipients of federal dollars — including Planned Parenthood — should be held to the highest standards and removed from programs if they fail to adhere to all regulatory measures or the law.

Planned Parenthood, with its history of fraud and abuse, has skirted the scrutiny of those who are tasked with overseeing the budgets of large public departments. It would behoove President Trump’s incoming secretary of HHS to investigate Planned Parenthood’s qualifications to remain publicly funded under Title X. After all, tax-payer dollars should never be used to put children’s lives and safety at risk.