In a previous piece, Live Action News revealed that, despite abortion proponents’ claims that taxpayers don’t fund abortion, taxpayers are footing the bill for more than half of all abortions committed in states where Medicaid pays for abortions. Now, here are more details from various states, detailing how much taxpayer funding is really being used to pay for abortions.

According to 2017 data, 50.6 percent of women who aborted used Medicaid to fund their abortions. Out of 1,255 abortions reported, 635 were taxpayer funded. 2016 data is available from Live Action News here.

The most recent Medi-Cal funded induced abortion report (2014), shows that taxpayers in California paid for 83,485 abortions.

In just the Medi-Cal FFS plan, taxpayers financed 53,907 abortions to the tune of $27,591,381.00. This included 4,438 Dilation and Evacuation (D+E) abortions, which are usually committed later in the pregnancy.

According to the Charlotte Lozier Institute, “In 2017, Illinois expanded Medicaid coverage to pay for elective abortions with state Medicaid funds. Before the expansion, Illinois’ Medicaid program covered abortion only when the pregnancy resulted from rape or incest or when the mother’s life was at risk.” 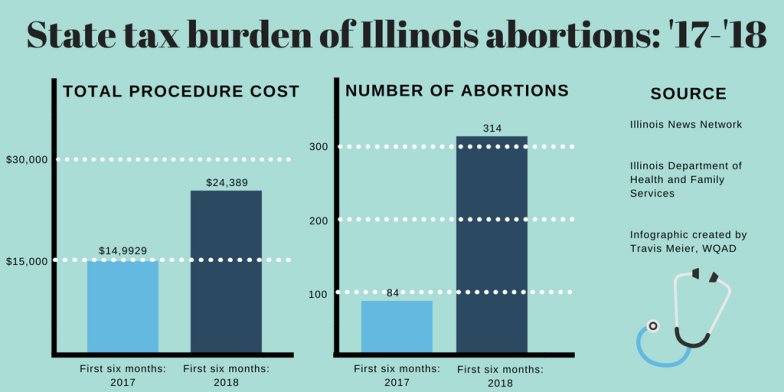 Illinois taxpayers may even be footing the bill for residents from other states, implied in a report published by WQAD which showed that in 2016, “there were were 4,543 out-of-state individuals that got an abortion in Illinois, 1,573 more than in 2014.”

“[O]ur Medicaid eligibility requirements are so lenient that we expect folks are going to come in from out of state, they will establish temporary residence to get their free abortion and then go home,” State Rep. Peter Breen told WQAD.

According to the most current data on state taxpayer dollars funding abortion (data may not include all abortions): 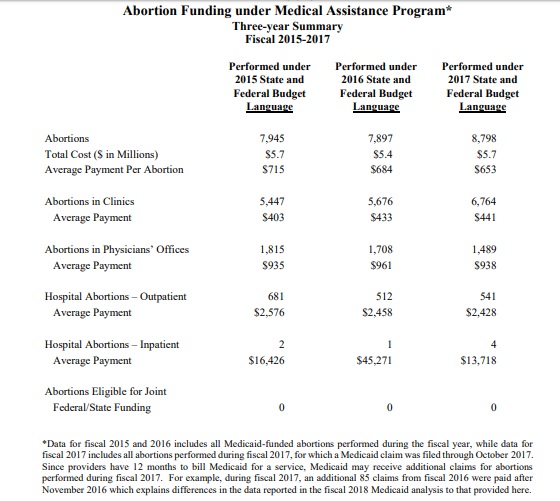 In 2017, out of 10,177 abortions performed in the state, nearly 44 percent (43.9) or 4,469 abortions were recorded as paid for with public assistance. Data from previous years has been published by Live Action News here. 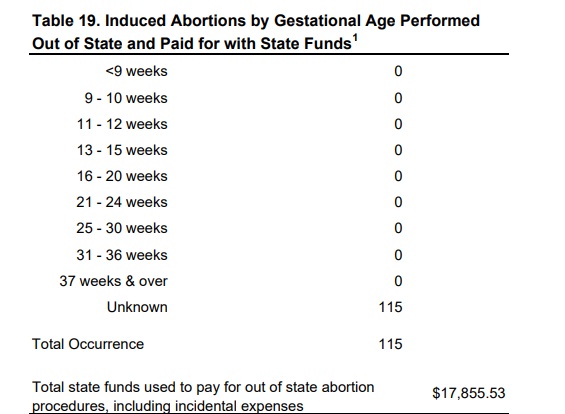 Tax funded out of state abortions for Minnesota 2017

Planned Parenthood committed 61.2 percent of the total abortions in the state that same year:

Information is not published; previous data published by Live Action News can be found here.

According to the state’s 2017 induced abortion report, an unknown number of abortions were recorded as being funded by Medicaid. The report indicates that the “cell was suppressed to maintain confidentiality of surrounding entries.”

In November of 2018, Oregon voters will decide if their state will continue to fund abortions. Measure 106 would prohibit public funds from being spent on abortions, except when medically necessary or required by federal law.

Jeff Jimerson of Oregon Life United recently told KATU that in 2017, the state paid $1.9 million to fund approximately 3500 abortions, an average of ten abortions each day.

A letter submitted by Lt. Gov. Kevin Bryant to The State claims that:

A summary of Medicaid-funded abortions from 2009 to 2017 was included in a report recently submitted by the Bureau for Medical Services to the West Virginia Legislature’s Joint Committee on Government and Finance, as follows: 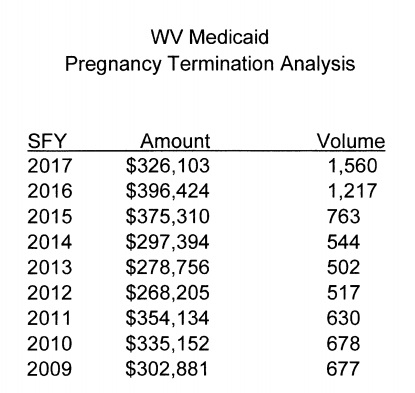 This list is by no means all state funding.

An analysis published earlier this year by Guttmacher found that “Medicaid was the second-most-common method of payment, reported by 24% of abortion patients. The overwhelming majority of these patients lived in the 15 states that allow state funds to be used to pay for abortion.”

Read part one of this two-part series here.