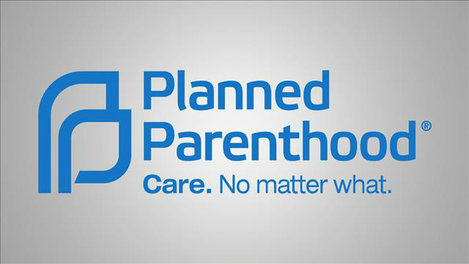 A November 2017 Court of Appeals document from the state of Washington indicates that a sexual predator raped his daughter over a period of seven years, taking her to Planned Parenthood for multiple abortions to cover his crimes. Planned Parenthood failed to report the incidents, as it has failed to report child sexual abuse in violation of both state and federal law many times in the past.

Live Action News has documented numerous criminal cases (read here and here), showing that Planned Parenthood is covering for these sexual predators. Yet the news media, politicians, and Hollywood stars continue to rally around this abortion corporation, while young sexual assault victims are left unprotected and continue to be abused for years.

In the November 2017 case, court records show that George Edward Savanah, who was convicted of two counts of third degree rape of a child and two counts of first degree incest, sexually abused his daughter, impregnating her three times. He then took her to Planned Parenthood for abortions.

The victim, referred to as “R” in the court documents, testified that her father raped her for the first time when she was just 14 years old.

A brief filed in the case reveals:

The young rape victim told authorities that Savanah impregnated her a total of three times at the ages of 14, 16 and 17, and each time he took her to Planned Parenthood for abortions to cover the crime. Any pregnant 14-year-old brought in for an abortion should automatically trigger suspicion from a medical provider, including mandatory reporters like Planned Parenthood. But Planned Parenthood, as has been shown time and again, sees no red flags with such victims. After all, Planned Parenthood sees no problem with a majority of teen girls being sexually active.

As is fairly typical, there was no indication made in the document that Planned Parenthood contacted authorities to report the crime. Instead, as seems to be Planned Parenthood’s pattern, they returned the young rape victim into the hands of her abuser, and Savanah continued to sexually molest the young child for the next seven years. 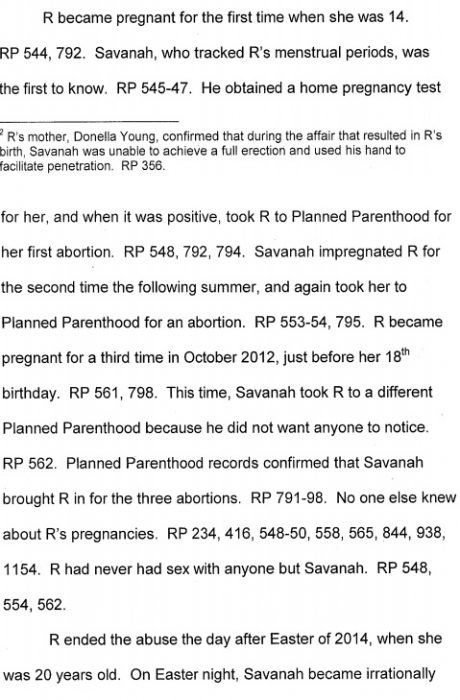 At sentencing for Savanah’s horrific crimes, the trial court imposed concurrent high-end standard-range sentences totaling 102 months of incarceration and 18 months of community custody. But for Planned Parenthood’s silence, they continue to receive millions of government dollars each year, while this victim is scarred for life.

Sadly she is not the only one betrayed by this taxpayer-funded organization.

In a 2014, a report from the Annals of Health Law, “Health Consequences of Sex Trafficking,” highlighted how victims of sex trafficking have stepped forward to testify about how they were forced to abort their babies, and also stated that they received other medical services from providers who knew they were being controlled by pimps. One victim said that the reason she was taken to Planned Parenthood was because “Planned Parenthood didn’t ask any questions.”

Planned Parenthood has been repeatedly silent in the face of sexual abuse, and yet, the media says nothing.

Case in point: In 2008, Live Action released its child sexual abuse investigation into Planned Parenthood, which found that eight Planned Parenthood facilities in six different states were willing to cover up sexual abuse, including disregarding mandatory reporting laws of suspected statutory rape. Facilities even provided instructions to the undercover investigators on how to circumvent parental consent laws.

Yet, this abortion corporation, which flaunts the law, continued to receive half a billion dollars every year from the taxpayer, while politicians and media alike approved.

In 2011, Live Action’s first investigation was followed by another, which set out to see how Planned Parenthood would respond to sex traffickers seeking services, including abortions, for their underage sex slaves.

In this investigation, Live Action sent a male and female undercover investigator into Planned Parenthood facilities in New Jersey, Virginia, New York, and D.C., posing as pimps seeking health services, including abortions, for underaged girls. Live Action claimed the videos proved Planned Parenthood was in violation of the law, which states that sex trafficking of minors is a crime and anyone who aids or abets a sex trafficker could also be punished with a crime.

And again, the millions in taxpayer dollars kept flowing to Planned Parenthood, despite the fact that government dollars can be removed when providers of Title X Family Planning funds fail to report child abuse.

Planned Parenthood’s response was to simply deny the accusation while claiming they would retain staffers. And they were able to get away with it, because instead of joining with Live Action and demanding an investigation, the media became part of Planned Parenthood’s PR machine, attempting to alleviate all concerns.

Even when, in 2016, Live Action produced FOIA documents disproving Planned Parenthood’s claim that it had contacted authorities to report the pimp, the media turned a blind eye.

Live Action then produced more evidence in the form of a video interview with former Planned Parenthood employee Ramona Trevino, who stated that Planned Parenthood lied when they said they would retrain staffers. Instead, they trained their staffers to spot undercover investigators like Lila Rose:

Planned Parenthood has access to our children through sex education programs in many schools. How can they continue to be trusted when they appear to care so little about children being sexually abused by rapists?

Why has Planned Parenthood been granted a pass from criticism and blame?

Live Action News will continue to expose how the media purposely lends a hand to the child sexual predators and abusers by covering for Planned Parenthood. Maybe one day, the complicity machine will end and Planned Parenthood’s silence breakers will be given a voice.