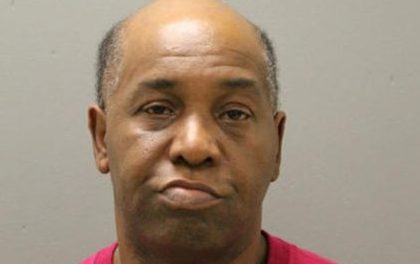 Planned Parenthood covers for child sexual predators by failing to report suspicion of sexual abuse when a minor is taken to them for birth control services or abortions. This can be seen in Live Action’s newest docuseries, Aiding Abusers:

In Alaska, where Planned Parenthood abortionists have stated that they believe all abortions are “medically necessary,” Dana Ray Thompson was convicted of multiple counts of first and second degree sexual abuse of a minor, plus multiple counts of exploitation of a minor and possession of child pornography following his sexual abuse of a teen victim — which included at least one trip to Planned Parenthood for birth control pills.

According to the court document, Thompson was in his mid-forties when he began a sexual relationship with his victim, referred to as “J.C.” The victim was 13 years old when Thompson began grooming her, telling her that “she had grown up,” asking about her bra size, and mentioning to J.C. that he wanted a sex slave.

According to the report, when J.C. turned 14, Thompson began talking to his victim about pornography and master-slave relationships, he then showed J.C. adult pornography. In 2005, Thompson began his sexual encounters with J.C. She was just 14 years old. Thompson then began engaging in more sexual activity with J.C., such as taking nude and sexually suggestive photographs of the young victim.

The court document states that when J.C. turned 15 years old, Thompson took her to Planned Parenthood “so that J.C. could obtain birth control,” after which, the predator and victim engaged in “multiple types of sexual intercourse.”

Given this timeline, it seems obvious from the court record that Planned Parenthood did not report suspicion of abuse. The abuse did not become public until the summer of 2008, three years after Thompson began his sexual assaults on the victim and at least two years after he took her to Planned Parenthood. According to the court document, the abuse became public when “J.C. spoke with a childhood friend who described being molested by an older man.” J.C. eventually told her mother who called the police. By this time, J.C. was 18, and had suffered additional abuse due to Planned Parenthood’s neglect. 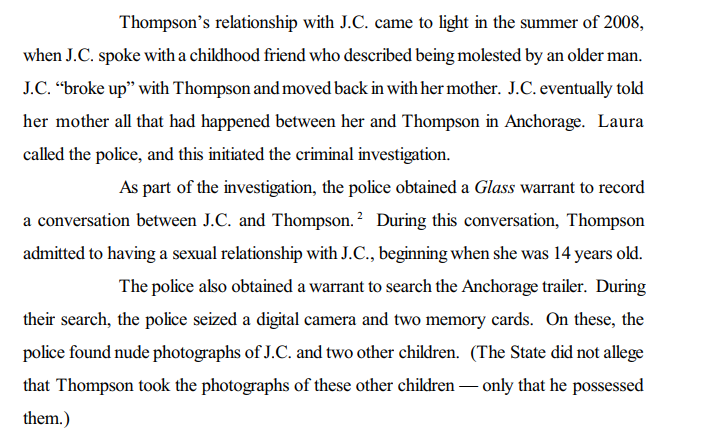 Thompson is now registered with the state as a child sex offender and child kidnapper.

According to the Puma County Attorney’s Office, Mark Joseph Tovar began his deviant molestation and sexual assault against his step-daughter when she was about seven years old. He intentionally and maliciously abused her for her entire childhood, grooming her by his gradual sexual advances over a period of about 14 years. According to a court document, when the victim, referred to as “M.G.,” was just 15 years old, Tovar impregnated her. As a result, M.G.’s mother arranged for an abortion in July of 2004, and the documents states that “Tovar knew about M.G.’s pregnancy and abortion.”

The court record indicates that a total of two abortions took place and they both occurred at Planned Parenthood. The second abortion took place after the victim had turned nineteen. In total, the documents indicates that, after Planned Parenthood obviously failed to report suspicion of abuse in the first instance, the victim became pregnant two other times, and kept the baby in one of the instances.

The sexual abuse wasn’t revealed to police until the victim was 22, nearly seven years after she was taken to Planned Parenthood at the age of 15. 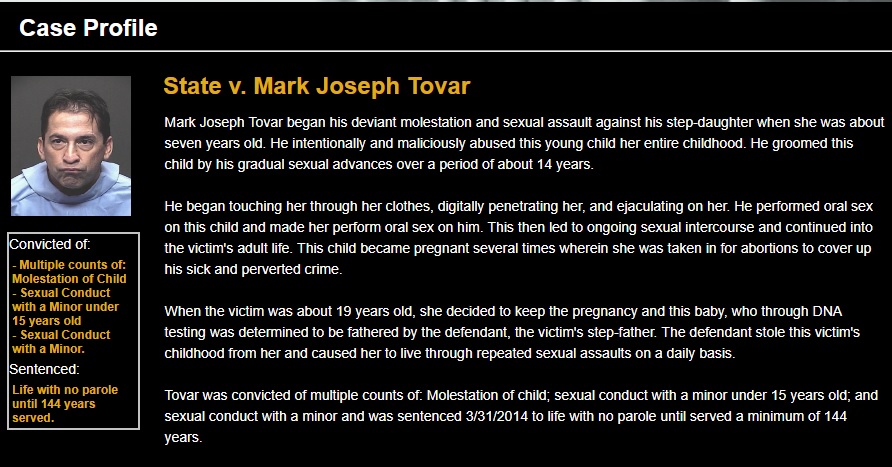 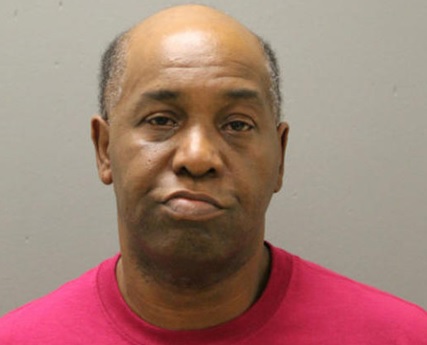 Kenneth Mitchell was arrested by the Chicago Police Department on January 14, 2016, and was charged with sexual assault of a minor less than 13 years of age and sexual assault of a family member under 18. According to the Chicago Tribune, Mitchell sexually assaulted one of his victims from 1999 to 2002. The girl was eight years old when the attacks started, according to Assistant State’s Attorney April Gonzales. The report states, “The victim told a Planned Parenthood counselor of the assaults at some point in 2006 or 2007, Gonzales said. Prosecutors and court record information did not indicate whether the counselor reported the incidents to authorities.” However, the allegations were not reported to police until the fall of 2015, many years after the victim claims she told Planned Parenthood, leaving questions as to whether Planned Parenthood filed a report.

Christopher Jewell was the stepfather to a young victim who is referred to as “T.S.” in court documents.

According to the court record, he engaged in a sexual relationship with T.S. from March 25, 2004, through June 30, 2007, while she was between the ages of thirteen and sixteen. The activity included fondling, oral sex, and sexual intercourse. While only six counts were filed against Jewell by the State in this case, the victim testified that he sexually assaulted her over thirty times and maybe as many as fifty times over the three-year period.

The court document states that during the course of the abuse, Jewell took the victim to Planned Parenthood to get her birth control pills without her mother’s knowledge. No other details were mentioned, but this shows that young teens are being taken to Planned Parenthood by their abusers to cover their crimes.

Jewell was not arrested as a result of his visit to Planned Parenthood.

Instead, Jewell was arrested in August 2008, after taking the minor for a tattoo. It was while he was in jail for the charge of aiding or abetting the tattooing of a minor that the victim finally went public about the sexual abuse and revealed to her boyfriend and mother that Jewell sexually abused her. The disclosures were then relayed to authorities.

51-year-old James Aaron Lenox took his victim to Planned Parenthood in Austin because she had never been to a doctor. He was arrested in early 2017 by the Texas’ Lone Star Fugitive Task Force, according to a report by KXAN. The article states that Lenox is accused of sex trafficking the 16-year-old.

According to reports, Lenox allegedly “gained guardianship over the girl, removed her from school, vowed to marry her and at one point threatened to kill her family.”

At the time of his arrest, police found nude pictures of the victim, with documents saying Lenox was the victim’s “uncle.” According to MySanAntonio.com:

After Lenox consented to a vehicle search, deputies found a briefcase containing separate folders. In one folder with a girl’s name on it, the deputies found several nude photos, documents state…. Lenox also allegedly took the girl to Planned Parenthood to get an IUD implanted, the documents said… the girl… was sexually assaulted by him…. Lenox is a registered sex offender who was convicted of indecency with a child via sexual contact in January 1989. The girl he molested was 8 years old.

KXAN reported Lenox told police that “he took the victim to Planned Parenthood in Austin because she had never been to a doctor. He told investigators the victim was worried about having some kind of disease. In an interview, the victim told police she had sexual encounters with Lenox.”

The article also notes that Lenox has been charged with trafficking a child — causing the child to engage in sexual conduct, a first degree felony.

According to the Salt Lake Tribune, a 34-year-old man has been charged with 12 counts of rape, after sexually abusing a 15-year-old teen and allegedly taking the child to three Planned Parenthood facilities to attempt to obtain an abortion after he impregnated her.

The only roadblock this male sex predator received from Planned Parenthood was that it was required by state law to obtain parental consent for the abortion. When the predator was told that a parent or guardian must sign for the procedure, he took matters into his own hands, by allegedly giving the teen “a drink to induce a miscarriage.”

The paper did not name the perpetrator (though a second media outlet published the name as Jose Casares-Montalvo), but indicated that the call to police originated not from Planned Parenthood, but from the victim’s mother after she “found a plastic bottle of the liquid mixture in the teen’s room,” telling police that “she suspected her daughter had been raped, according to court documents.”

According to the media report, the predator admitted to police that he took the victim to Planned Parenthood, and “other documents accuse the man of trying to get the abortion ‘to hide what he had done.'”

Live Action News has previously documented cases in which Planned Parenthood staffers were accused of sexual abuse or harassment, as well as cases documenting what happens when sex trafficking victims are taken to abortion and Planned Parenthood facilities. A 2014 report from the Annals of Health Law, “Health Consequences of Sex Trafficking,” quotes one victim claiming that the reason she was taken to Planned Parenthood was because “Planned Parenthood didn’t ask any questions.”

Today, Planned Parenthood receives half a billion in tax dollars annually, thanks to Congress, which continues to fund the organization despite its known abuses and despite regulations showing that government dollars can be removed when providers of Title X Family Planning funds fail to report child abuse. And, just like the Harvey Weinsteins of the world, Planned Parenthood has its own complicity machine made up in part by the media and politicians who give them cover while they aid in the continued abuse of children.