In the days leading up to the Roe v. Wade Supreme Court decision legalizing abortion in America, pro-choice advocates claimed hundreds of thousands of women had died from illegal abortions. Because of this, several lawmakers voted to decriminalize abortion prior to Roe, and even today, some lawmakers are hesitant to outlaw it because of this lie. These statistics were invented by the same people who would profit from the procedure’s legalization.

FACT: These statistics were made up. The real number was a mere fraction of this.

Abortionist Bernard Nathanson admitted that he and others fabricated large numbers of deaths from illegal terminations prior to Roe. Nathanson and Larry Lader, a Margaret Sanger biographer, worked to decriminalize abortion laws. Together, they and others founded NARAL (then known as the National Association for the Repeal of Abortion Laws).

Alexandra Desanctis writes in National Review, “Undoubtedly this argument, that the illegality of abortion was leading to the deaths of countless women at the hands of ‘back alley butchers,'” played an essential role in deciding Roe, adding, “Blackmun… cited the papers of [a] NARAL attorney… who falsified the legal history of abortion to make it appear as if abortion restrictions were not imposed until the 19th century and were created then only to protect maternal health rather than the lives of unborn children.”

Nathanson admitted in his book that the 5,000-10,000 illegal death figure was fabricated because it was a “nice, round, shocking figure.” And the media repeated it without proof.

“There were perhaps 300 or so deaths from criminal abortions annually in the United States in the sixties,” he said, “but NARAL… claimed to have data that supported a figure of five thousand.”

The 5,000 figure originates from several sources based largely on assumptions. In the image below, NARAL’s footnote quotes from a source that allegedly “discussed Dr. Christopher Tietze’s estimate of nearly 8,000 deaths from illegal abortion annually in the United States.” One problem: Tietze disputed that number, as did records of maternal deaths reviewed by the CDC. Larry Lader admitted, “Tietze places the figure nearer 1,000.” 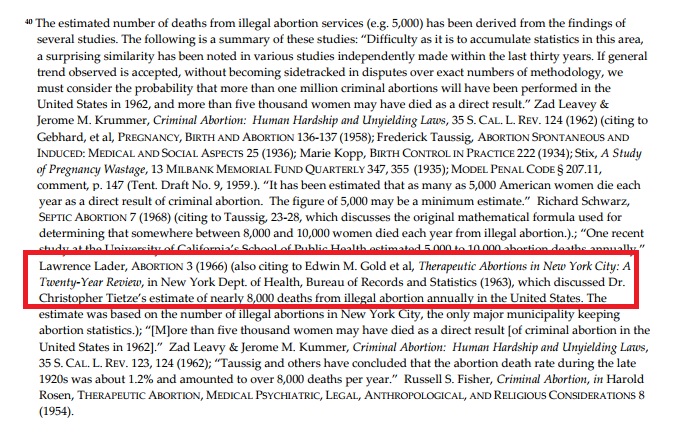 In 1930, the Guttmacher Institute claimed abortion was the “official cause of death for almost 2,700 women.” By 1940, that number had dropped to between 1400 and 1700. By the 1950s, Mary Calderone claimed these deaths were at around 300, and Guttmacher agreed, citing “the introduction of antibiotics in the 1940s, which permitted more effective treatment of the infections that frequently developed” after illegal procedures. Antibiotics also led to a significant decline in maternal mortality overall.

In 1967, Dr. Tietze called the 5,000 illegal abortion deaths claim “unmitigated nonsense,” according to an article in the Berkshire Eagle, saying the real number was “certainly no more than a thousand.” He said people lied “to raise sympathy for liberalized abortion laws” by “mak[ing] people afraid.” (Tietze was given Planned Parenthood’s Sanger Award in 1973.)

A 1975 report by the National Academy of Sciences found that “the total number of deaths due to abortion reported by the National Center for Health Statistics has been below 500 since 1958 and below 100 since 1971.”

FACT: Before Roe, the most illegal abortions were done by physicians.

Past Planned Parenthood president Alan Guttmacher admitted to the Harvard Crimson in 1967 that “Seventy per cent of the illegal abortions in the country are performed by reputable physicians, each thinking himself a knight in white armor.”

A Planned Parenthood Federation of America medical director, Mary S. Calderone, admitted the same in 1959, telling the Maternal and Child Health Section of the American Public Health Association that abortion was “no longer a dangerous procedure,” because physicians were doing it. 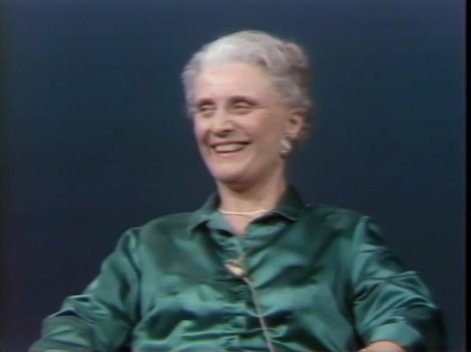 She added that they “must do a pretty good job if the death rate is as low as it is. Whatever trouble arises usually comes after self-induced abortions, which comprise approximately 8 per cent, or with the very small percentage that go to some kind of nonmedical abortionist….”

READ: Gosnell is not alone: Why we need more investigations and stricter regulations

In most states prior to Roe, doctors were legally permitted to commit “therapeutic abortions” if the woman’s life was endangered. (We know today that abortion is actually never medically necessary.) Calderone said, “Abortion is no longer a dangerous procedure. This applies not just to therapeutic abortions as performed in hospitals but also to so-called illegal abortions as done by physicians.”

Whether illegal or legal, every abortion is intended to take the life of a human baby and can physically damage or kill the mother.

Editor’s Note: The full, unrevised version of this article was originally published by Live Action News on March 26, 2018 and can be read here.