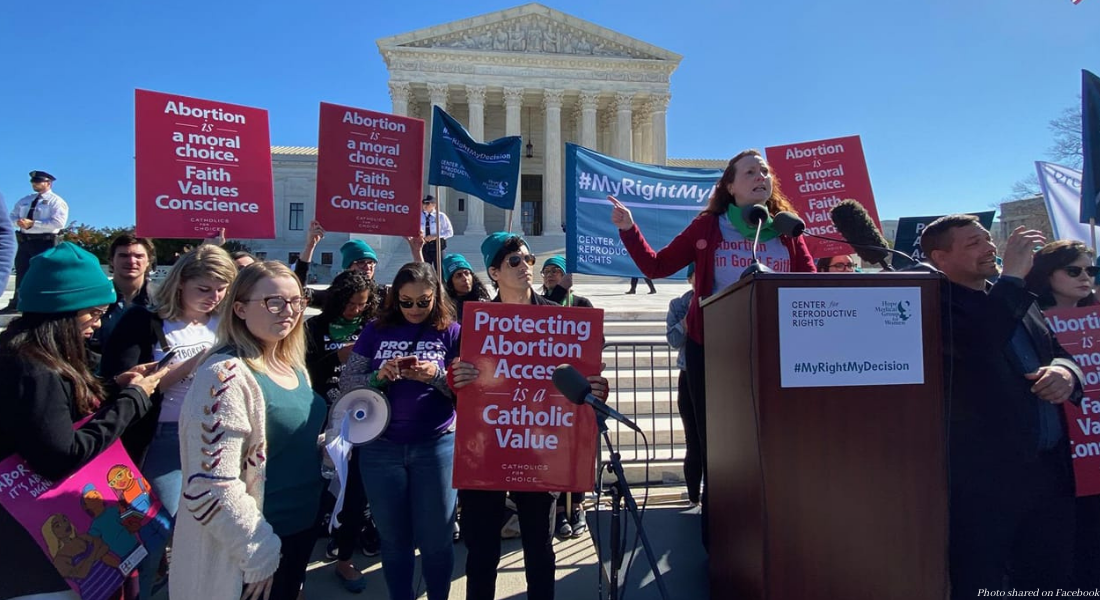 Joe Biden, inaugurated as the nation’s 46th president last week, is only the second Catholic ever to hold the office. While he openly celebrates his faith and considers himself a devout Catholic, he breaks with the Catholic Church in that he is an ardent supporter of abortion. While this is troubling for Catholics who abide by Church teaching, one pro-abortion “Catholic” group is celebrating.

Catholics for Choice, the organization which once sent Planned Parenthood love letters for Valentine’s Day, is applauding Biden’s break with the Catholic Church on pro-life teaching. While the Catholic Church is one of the staunchest defenders of life from the moment of fertilization onward, Catholics for Choice would like to see that change. Calling abortion access a “Catholic social justice value,” Catholics for Choice released a statement urging Biden to quickly expand access to abortion (emphasis added below), citing as a reason — unbelievably — the church’s call to “human dignity”:

We at Catholics for Choice welcome Joe Biden as the first prochoice Catholic president & call on him to protect & expand abortion rights in the first days of his presidency. President Biden frequently connects his care for the poor, the sick & the vulnerable to his Catholic faith.

As a longtime champion of women’s rights and the rights of marginalized people, Joe Biden surely understands that policies like the #GlobalGagRule, the #HydeAmendment & the #HelmsAmendment inflict disproportionate suffering on the poor, the sick and the powerless.

Joe Biden has dissented from Catholic teaching on issues related to marriage equality, transgender rights and contraception because he realizes that the church’s teachings on these topics do not reflect the church’s greater call to justice, equality and human dignity.

We call on the President to use his conscience and his commitment to human rights in the same way by acknowledging that abortion access is a Catholic social justice value and working to improve access for those who need it.

… As one of the 60% of U.S. Catholics who supports abortion rights, Joe Biden can show a divided nation that people of faith can not only support abortion rights, they can do so as an expression of their commitment to justice that is grounded in their religious belief.

If more people of faith truly knew what “abortion rights” look like, would they still feel the same?

Jamie Manson, president of Catholics for Choice, also wrote an op-ed for NBC News urging Biden to overturn the Trump administration’s pro-life policies. Yet how did this pro-abortion organization respond to another notable Catholic who recently took a prestigious political appointment?

Amy Coney Barrett is a devout Catholic — but unlike Biden, she is pro-life. While Biden has been lauded for his purported Catholic faith by mainstream media, Barrett has been attacked. The mainstream media is consistent in one thing: expressing hostility toward those whose deeply held religious convictions cause them to act upon those religious convictions in society — not just within the four walls of a church building. Senator Dianne Feinstein, for example, notably criticized Barrett for being too devout in her Catholic faith during a Senate Judiciary Hearing well before Barrett was considered as a Supreme Court nominee.

“Why is it that so many of us on this side have this very uncomfortable feeling that — you know, dogma and law are two different things,” Feinstein said. “And I think whatever a religion is, it has its own dogma. The law is totally different. And I think in your case, professor, when you read your speeches, the conclusion one draws is that the dogma lives loudly within you, and that’s of concern when you come to big issues that large numbers of people have fought for years in this country.”

Catholics for Choice likewise has repeatedly condemned Barrett for abiding by Church teachings. In one statement, the pro-abortion group claimed, incredibly, that Barrett’s nomination to the Supreme Court would be an attack on religious freedom:

As Catholics who support the rights of all people to make decisions in accordance with their conscience, we are deeply troubled by Amy Coney Barrett’s rulings as a 7th Circuit judge, as well as her public statements and writings, all of which cast doubt on her willingness to apply the law in an impartial manner. We believe that religious freedom is a floor putting Americans of all faiths – and none – on equal footing, not a ceiling to limit the beliefs of some. Religious freedom is about respecting the right of each individual to follow their own conscience.

Our Catholic faith informs our conscience which guides us in moral decision-making. As Catholics, we are called to follow our conscience, but our religious beliefs are not a substitute for impartial jurisprudence, especially not in a society where all are protected by the First Amendment. We firmly reject any suggestion that to question Amy Coney Barrett on how her faith impacts her view of the law is somehow anti-Catholic or anti-Christian. A judge cannot and should not substitute his or her own religious beliefs for the law. Based on her statements and record, it appears Amy Coney Barrett has indicated her intent to do just that.

We are alarmed by her apparent understanding of religious liberty, which, as Catholics, we believe is protection of individual conscience which should extend to everyone. Catholics for Choice shared our concerns when Amy Coney Barrett was nominated to the 7th Circuit Court of Appeals, and her record since then has not lessened our concerns. We urge the Senate to protect the religious freedoms and civil rights of all Americans by rejecting the nomination of Amy Coney Barrett to the Supreme Court.

After Barrett was confirmed to the Supreme Court, Catholics for Choice claimed her confirmation “jeopardizes Americans’ moral and constitutional freedoms,” with this argument being made solely because Barrett abides by Church teachings.

“Americans must now contend with a Supreme Court that is even farther out of step with the rest of the country with it comes to birth control, abortion, LGBTQ rights and a number of other basic freedoms,” Manson said. “With the confirmation of Judge Coney Barrett, six of the nine Supreme Court justices will now be Catholic, and – with the notable exception of Justice Sotomayor – extremely conservative. In its far-right positions, the court neither represents American Catholics nor the whole of the American people, and we are deeply concerned about the implications for reproductive freedom and religious liberty for all.”

Manson apparently isn’t concerned with Catholic groups like the Little Sisters of the Poor, which are actually being persecuted by the government, and instead, prefers to create bogeymen out of pro-life Catholics.

Joe Biden may well attend Mass on a regular basis, but he openly rejects the Church’s teachings on the sanctity of life — and for that, Catholics for Choice applauds him. Yet someone who is openly Catholic, expressing a belief in the pro-life teachings of the Church, is depicted by Catholics for Choice as someone who is a danger to religious liberty.

It seems Catholics for Choice only appreciates someone’s purported Catholic faith if it remains at face value and discards actual Church teaching.