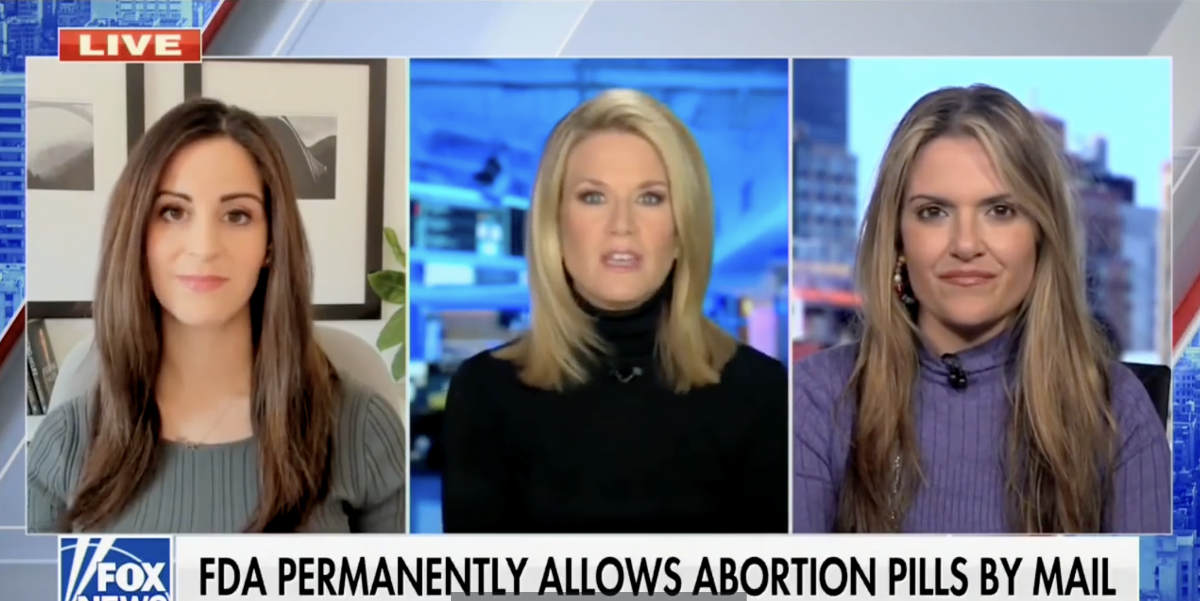 Lila Rose, president and founder of Live Action, appeared on Fox News on December 21 along with Nomiki Konst, host of The Nomiki Show podcast, to discuss the recent FDA decision to permanently loosen abortion pill safety measures. The decision, which Rose called “devastating,” will allow the dangerous abortion pill to be mailed to women without requiring an in-person visit with the provider prescribing the abortion pill.

“[The FDA is] not following the science,” explained Rose. “They are playing politics here with the health of women and the lives of children. The abortion pill has already killed almost five million children and over 25 women in this country. And now, because this administration is so pro-abortion, Biden is so pro-abortion, he’s answering the beck and call of the abortion industry because they stand to make a buck by making our postal service a carrier for deadly abortion pills.”

It didn’t take long for Konst, in her responses to Rose, to become unhinged:

While Konst began by calling Rose’s words “absolutely false” and claimed that the “FDA has put more oversight on these pill than they have through Viagra or Tylenol,” the truth is the abortion pill (mifepristone) has killed five million human beings in the womb and is associated with the deaths of 26 women* in the United States alone, according to the latest serious adverse events report from the FDA. The abortion pill has actually been found to be four times more dangerous for women than a first-trimester surgical abortion with risks of hemorrhaging, incomplete abortion, infection, and death.

Konst went on to accuse Rose, saying, “And if you really do care about a woman’s health then you would make sure that you are protecting them with safe access to abortion. […]Most women are having [an abortion] within the first six to eight weeks and that’s where these pills work well,” she continued. “They are safe, they are regulated, and they are legal and that is what’s so important. If Lila cares so much about the mother’s health then you would make sure there is a safe way to have abortions because abortions are gonna happen. They have always happened. If you care about the mother then you care about her safety and you need to create a pathway to do so.”

Claiming that abortions (the deliberate killing of preborn human beings) will happen and therefore it should be legal is like saying that any act that causes bodily harm should be legal to make it less risky for the person doing the harm.

But in reality, killing a human being is never safe for the human who is killed.

Konst claimed that abortion pills “work well” in the first six to eight weeks of pregnancy, and by this, she means that they must successfully kill a living, innocent human being. The abortion pill is approved by the FDA for use up to 10 weeks, but one of the major concerns surrounding the FDA’s decision to allow the abortion pill to be dispensed by mail is that there is no sure way to verify that a woman is no more than 10 weeks pregnant when she takes the pill. She could lie about her gestational time frame, falsify ultrasound images, or simply get the date wrong — or she could even choose to wait and take the pill at a later gestational age. This would increase the chances of having a failed abortion, which is already far too common with the abortion pill regimen.

A failed abortion means that even if the baby has been successfully killed, his or her body remains in the uterus, which can lead to infection, sepsis, or even the mother’s death.

As Rose attempted to explain the dangers of mailing abortion pills to women, and the risk to minors and victims of abusers, Konst attempted to speak over her, holding up a prop box of “abortion pills” and saying “If you agree with me, shout your abortion.”

At one point Konst laughed at Rose’s claim that preborn humans are “children,” yet she called the women carrying these babies “mothers.”

Konst continued her time on Fox News by becoming more and more enraged. “The reality here is Lila is saying that she cares so much about women. Thousands, hundreds of thousands of women have died because they do not have safe access to clinics, doctors,” she said.

That’s when Rose stopped Konst in her tracks.

“So are you saying they should have in-person visits with doctors?” Rose pressed. The entire point of the discussion was that the FDA just told women they can skip the clinic and the doctor visit to take the dangerous abortion pill alone at home.

But this decades-old lie about women dying in droves from illegal abortion was first concocted by pro-abortion, influential men who wanted to see abortion legalized. In order to succeed, these men, including NARAL founder Dr. Bernard Nathanson, fabricated the lie that 10,000 women were dying from illegal abortion annually, when the number was closer to 300. In 1972, the year before Roe v. Wade, the CDC reported 39 maternal deaths from abortion.

“We persuaded the media that the cause of permissive abortion was a liberal, enlightened, sophisticated one…. Knowing that if a true poll were taken, we would be soundly defeated, we simply fabricated the results of fictional polls,” Dr. Nathanson explained after becoming pro-life.

Konst can shout and interrupt, but it will not make her lies and misconceptions about abortion and the abortion pill true.

*Editor’s Note: FDA has received reports of serious adverse events in women who took mifepristone. As of June 30, 2021, there were reports of 26 deaths of women associated with mifepristone since the product was approved in September 2000, including two cases of ectopic pregnancy (a pregnancy located outside the womb, such as in the fallopian tubes) resulting in death; and several cases of severe systemic infection (also called sepsis), including some that were fatal. The adverse events cannot with certainty be causally attributed to mifepristone because of concurrent use of other drugs, other medical or surgical treatments, co-existing medical conditions, and information gaps about patient health status and clinical management of the patient. A summary report of adverse events that reflects data through June 30, 2021 is here.