As society rejects abortion in larger and larger percentages and the humanity of the preborn child becomes overwhelmingly obvious, the radical abortion lobby reverts to false claims used successfully in the past — especially the lie that if abortion was ever again made illegal, thousands of women would die.

Embedded in this lie is the assumption that legal abortion means safe abortion, and this is based on the false claim that when abortion used to be illegal, thousands (or even millions) of women died because of it.

While this false claim has spread like wildfire, the truth is that Dr. Bernard Nathanson — one of the early founders of the National Abortion Rights Action League (NARAL) who later repented of his pro-abortion actions and views, revealed that he and his colleagues fabricated the large numbers of deaths from illegal abortion in an attempt to sway public opinion toward making abortion legal:

We persuaded the media that the cause of permissive abortion was a liberal, enlightened, sophisticated one…. Knowing that if a true poll were taken, we would be soundly defeated, we simply fabricated the results of fictional polls. We announced to the media that we had taken polls and that 60 percent of Americans were in favor of permissive abortion. This is the tactic of the self-fulfilling lie. Few people care to be in the minority. We aroused enough sympathy to sell our program of permissive abortion by fabricating the number of illegal abortions done annually in the U.S. The actual figure was approaching 100,000, but the figure we gave to the media repeatedly was 1,000,000.

This lie appeared to work.

During the debate to liberalize abortion in New York, the fabrication about illegal abortions actually swayed one representative to change his vote on the floor, opening the door to abortion on demand in that state.

The deciding vote was cast by Democrat Assemblyman George Michaels, who told the LA Times that for years he had been told by local party leaders not to vote for the repeal of the abortion ban, and he pledged not to.

For two years he had followed the party line. “I would vote no, hoping the bill would pass,” he said. “I was not doing the right thing.”

In April, 1970, Michaels had a conversation with his daughter-in-law, Sarah, and the topic of illegal abortions came up. Michaels told the LA Times that Sarah said, “In the meantime, thousands of women will be mutilated and die because of that stupid Legislature.”

The paper describes Michaels’ response and what occurred next:

Michaels returned to Albany still not knowing how he would vote, he says. “I was hoping somebody would switch; that it wouldn’t be George Michaels.”

The vote was taken. Michaels voted against the repeal. Then, just before the clerk announced the vote, he stood up and asked the Speaker to change his vote.

“When it came to a tie vote, I could not go through that charade any longer,” he said. “I knew my career was finished.”

And, based on a lie, the Assemblyman voted to repeal New York’s abortion laws, opening up a floodgate of abortions in the state.

Since those early years, the abortion lobby has stuck with that lie, and the media has been more than willing to help.

A report authored by Merry Merrifield and published in the Chicago Tribune claimed that in 1964, 264 deaths had occurred from illegal abortion, according to the Department of Health Education and welfare (HEW). 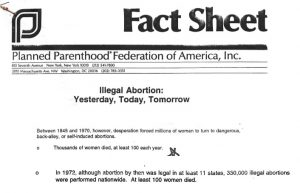 In 1991, Planned Parenthood published its version of a “Fact Sheet” on illegal abortion deaths. These are some of the claims about illegal abortions made in that publication:

Between 1845 and 1970… desperation forced millions of women to turn to dangerous back-alley, or self-induced abortions.

Thousands of women died, at least 100 each year.

In 1972, although abortion by then was legal in at least 11 states, 330,000 illegal abortions were performed nationwide. At least 100 women died.

Statistics show that in the year prior to Roe (1972), the Center for Disease Control’s abortion surveillance reports disputed Planned Parenthood’s alleged “facts.” In this table from the CDC report (shown below) just 39 women died from illegal abortion in 1972 while 24 died from legal abortion.

What Planned Parenthood doesn’t typically say is that one of its own former presidents, Alan Guttmacher, made it clear that a majority of those who committed the supposedly dangerous illegal abortions which killed (according to them) “thousands of women,” were none other than trained physicians.

A 1967 Harvard Crimson article documented the statement, writing, “Seventy per cent of the illegal abortions in the country are performed by reputable physicians, each thinking himself a knight in white armor.”

Despite all the past rhetoric regarding illegal abortion, the reality is that it is becoming more and more difficult to convince the American public that “legal” abortion is safe — and this is for good reason.

Cree Erwin-Sheppard died in July 2016, a few days after having an abortion at Kalamazoo’s Planned Parenthood facility on West Michigan Avenue. The 24-year-old had an abortion there on June 30, according to Operation Rescue. (The pro-life group has since filed a complaint against the Kalamazoo Planned Parenthood, seeking a revocation of its license to conduct abortions.) Local pro-life activist Lynn Mills, who uncovered the woman’s tragic death and has been working to expose all the facts of this case, quickly organized a rally to demand Justice for Cree.

Surprisingly, no one from the abortion lobby cared to weigh in.

The woman’s brother, Tyler Sheppard, even flew to Michigan to speak out against what Planned Parenthood did to his sister.

A portion of his statement can be heard in the video below, following an excerpt of the emotional 911 call made by Cree’s mother, who discovered her daughter’s body:

According to a report by Operation Rescue:

Sheppard displayed a copy of Cree’s medical record obtained by another family member from Bronson Hospital in Battle Creek where she had sought help for severe abdominal pain, nausea, and vomiting two days after having a 12-week abortion at Planned Parenthood in Kalamazoo.

At the hospital, records show that an ultrasound discovered “products of conception” inside the uterus consistent with an “incomplete miscarriage,” the hospital’s term for an incomplete abortion.

“They saw baby parts still inside of my sister and they still sent her home . . . I want to know what happened,” Sheppard said, questioning why she was not treated at this hospital. 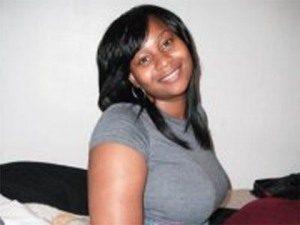 An autopsy was performed on July 4, 2016, which showed that a uterine perforation was discovered. Blood clots were found in her uterine artery and lungs, which caused her death. Blood and urine were sent for toxicology screening.

But Operation Rescue states that “when the autopsy was finally released on March 9, 2017, all mention of the abortion, uterine perforation, and IUD insertion were redacted along with the salient portions of the cause of death while other sensitive information was left intact.”

While answers are still forth coming in Cree’s abortion death, there is no debate in what happened to another 24-year-old Planned Parenthood patient by the name of Tonya Reaves.

Reaves died following a fatal second trimester abortion which she received at an Illinois Planned Parenthood on July 20, 2012.

Tragically, Reaves and Erwin-Sheppard are just two examples of a growing list of women who have died after believing the lie that legalizing abortion made it safe. The names of these women haunt abortion supporters who refuse to acknowledge their tragic end.