A Texas State University student, who flew into a rage and destroyed a pro-life display in a free speech zone on campus this week, released a Twitter video defending his actions, writes The Daily Caller.

“I reject bigotry,” said Ian Ramos in the now-removed video on his now-deleted Twitter account, apparently unaware of the irony in his statement.

Bigotry is defined as “intolerance toward those who hold different opinions from oneself” — therefore, it appears that Ramos, who says he plans to be a teacher, acted in quite the opposite manner as someone who purports to “reject bigotry.” Ramos added, “I don’t have to put up with anyone peddling some false, ignorant ideology. I engaged my rage.”

It’s kind of sad that I need to point this out, but saying in one breath that you reject bigotry and then saying you don’t have to show tolerance toward the beliefs of others who disagree with you is… well, contradictory.

Ramos’ intolerance was on full display in the video of the incident (warning — profanity):

Ramos told The Daily Caller that he “kind of regret[s] being so emotionally-charged” but believes “it’s our job as intellectual beings to engage with things that are wrong.”

Well, if you want to be intellectual, cursing while ripping up and throwing signs is probably not the way to do that. How about having a discussion? No?

“At the end of the day, I think it’s not a conversation that we really need to be engaging in,” Ramos told the DC.

So… “engaging” doesn’t include having a conversation or debate about the issues, then, hmm?

Ramos said pro-lifers who display imagery “want[] to start some sort of intellectual discussion that’s going to bring us over” to the pro-life side. I’d like to offer a hearty thank you for this admission on Ramos’ part. I mean, it’s not every day that pro-choicers admit that it’s the pro-life side who wants to have intellectual discussions about abortion, while the other side wants… the opposite.

Ramos also said he hopes his act of rage “inspires” someone else to “engage the opposition” — through attempting to stifle the free speech of others, apparently, since rational discussion is admittedly not a consideration.

At the same time Ramos hopes his rage is inspirational, he also admits it might not have been the “most constructive” action. “I’m sick and tired of being subjected to this ignorance,” he said of the pro-life display. “These anti-abortion activists come onto our campus every semester using their distorted imagery of aborted fetuses….”

The pro-life position is not based in ignorance, but in science. And not all of the displays Ramos destroyed bore photos of aborted babies. Some showed photos of developing human embryos and fetuses, similar to this: 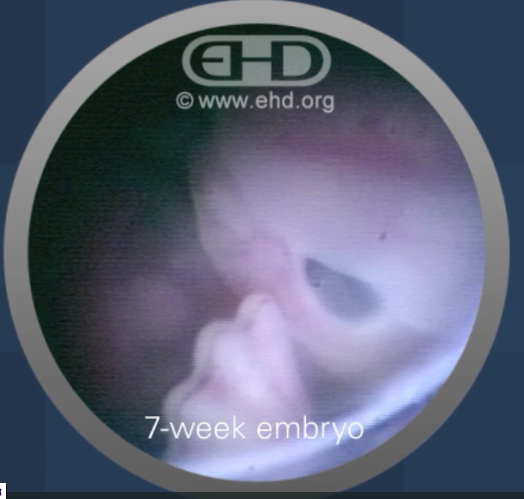 Why are these images controversial?

Maybe it’s because people like Ramos, who claim abortion is a “profoundly human right,” don’t want to see what abortion actually does, or the bodies and faces of the human beings that abortion is actually killing.

Maybe those same people, when faced with the reality of what they support, feel a misdirected anger at the messengers — those who are exposing the faultiness of their belief systems.

As I reported before, pro-lifers have seen many pro-choicers “engage the rage.” This rage isn’t making pro-lifers go away, go home, or stay quiet. It isn’t making us deny the science of when life begins, or the science of the human being growing in the womb. What it does, instead, is show pro-lifers that we still have a great deal of work to do to educate a society so entrenched in the idea that the killing of human beings, abortion, is a human right and a societal good.