A new bill introduced in the U.S. House of Representatives would prevent the FDA from loosening important safety restrictions (known as REMS) for the abortion pill (mifepristone). According to a press release from the office of Rep. Robert E. Latta (R-OH), the Support and Value Expectant (SAVE) Moms & Babies Act, legislation addresses “many of the concerns surrounding chemical abortion pills. The SAVE Moms & Babies Act would prevent labeling changes for already approved abortion drugs; prevent providers from dispensing these drugs remotely, by mail, or via tele-medicine; and prevent the Food and Drug Administration (FDA) from approving new chemical abortion drugs.” The release continues:

Currently, the chemical abortion pill, Mifeprex, has a Risk Evaluation and Mitigation Strategies (REMS) label on it, indicating it is a dangerous drug with known serious risks. Chemical abortions, when compared to surgical abortions, have a higher complication rate and result in a higher rate of emergency room visits. If REMS is removed, patients won’t need ultrasound or medical examination before receiving this drug, and a single health care provider could mail out chemical abortion pills to women and young girls across the country, bypassing protections like parental involvement, waiting periods, and informed consent. 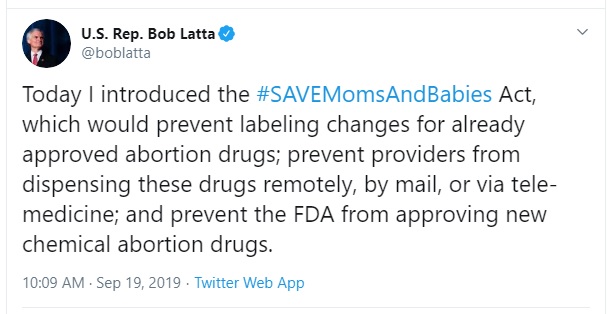 The abortion pill, Mifeprex (mifepristone), was approved in 2000 after being brought to the U.S. by the eugenics-founded Population Council, and was funded by the Packard Foundation and other pro-abortion philanthropy groups. A highly secretive company — DANCO Laboratories — was set up to manufacture the drug.

Live Action News has been reporting on the abortion industry’s increased effort to expand abortion via online TelAbortion, pharmacy dispensing in pharmacy and mail order pharmacy, and even dangerous and illegal distribution of abortion pills online under so-called “self-managed” abortion. Live Action News has documented that the Buffett and Packard Foundations were original investors in DANCO Labs. Billionaire George Soros (Open Society Foundations) and the California-based Kaiser Family Foundation also invested in the abortion pill. Multiple studies claiming that the off-label dispensing of these pills is safe are often funded by original investors in abortion pill manufacturer DANCO — many of which fail to reveal these conflicts of interest.

Live Action News has previously documented the following clinical trials, which are being conducted to expand the abortion pill’s availability and distribution:

On April 11, 2019, the FDA approved a generic version of the pill regimen. As previously documented, GenBioPro, Inc.’s abbreviated new drug application was approved for a generic Mifeprex, which, when used with Misoprostol, is approved as an abortion pill regimen. This past week, the state of California approved legislation (SB24) which would require state universities and college campuses to dispense the abortion pill regimen on campus, despite the fact that expanding abortion pill access to young girls is not only dangerous but has a profit motive (read those connections here).

According to the latest report from the Guttmacher Institute (Planned Parenthood’s former “special affiliate”) the numbers of abortions are declining nationally, and the US abortion rate hit its lowest level since Roe. Despite the drop, Planned Parenthood now garners nearly forty percent of the abortion market share. Guttmacher, Planned Parenthood, and the Tara Health Foundation (which funds abortion pills on CA campuses) have published plans to expand abortion, including so-called self-managed abortion.

“While the national abortion rate decline is a welcome sign, the dramatic rise in use of the abortion pill should worry pro-life activists and pro-abortion activists alike,” Congressman Latta said.

“We know from patient testimonies and FDA studies that there is nothing simple or easy about the chemical abortion pill. Without proper medical oversight, it has resulted in hospitalizations, severe complications, and several deaths. Lawmakers and advocates pushing for this pill to be available on demand and over the counter are neglecting the safety and health of women across this country. The SAVE Moms & Babies Act helps ensure this abortion method is recognized for what it is: dangerous,” the Congressman added.

In December of 2018, the FDA updated its adverse effects reports, revealing that to date, at least “24 deaths of women [have been] associated with Mifeprex since the product was approved in September 2000, including two cases of ectopic pregnancy resulting in death; and several cases of severe systemic infection (also called sepsis), including some that were fatal….” In addition, thousands have been hospitalized. As of 2016, only deaths are required to be reported to the FDA, so we can only imaging how many serious complications there actually are.