Currently, abortion insiders, many with ties to abortion pill manufacturer Danco, are pushing for expansion of the abortion pill, despite thousands of adverse effects and two dozen deaths. The abortion pill regimen consists of two drugs: Mifepristone  (or Mifeprex) and Misoprostol. The FDA has warned women against purchasing these dangerous pills online.

Dr. Daniel Grossman, a professor of obstetrics and gynecology at the University of California, San Francisco, who also teaches abortion allegedly told a reporter at The Atlantic that if women using these [self-managed abortion] regimens experience heavy bleeding or some other complication, they are generally advised to go to a hospital and say they had a miscarriage.

The international abortion organization, Women on Web, advises women on its website to present to the ER and claim they are having a miscarriage if they experience complications from the abortion pill in a country where taking the drug is illegal:

If you think you might have a complication you should go to a doctor immediately. If you live in a place where abortion is a crime and you don’t have a doctor you trust, you can still access medical care. You do not have to tell the medical staff that you tried to induce an abortion; you can tell them that you had a spontaneous miscarriage. Doctors have the obligation to help in all cases and know how to handle a miscarriage.

The symptoms of a miscarriage and an abortion with pills are exactly the same and the doctor will not be able to see or test for any evidence of an abortion, as long as the pills have completely dissolved. 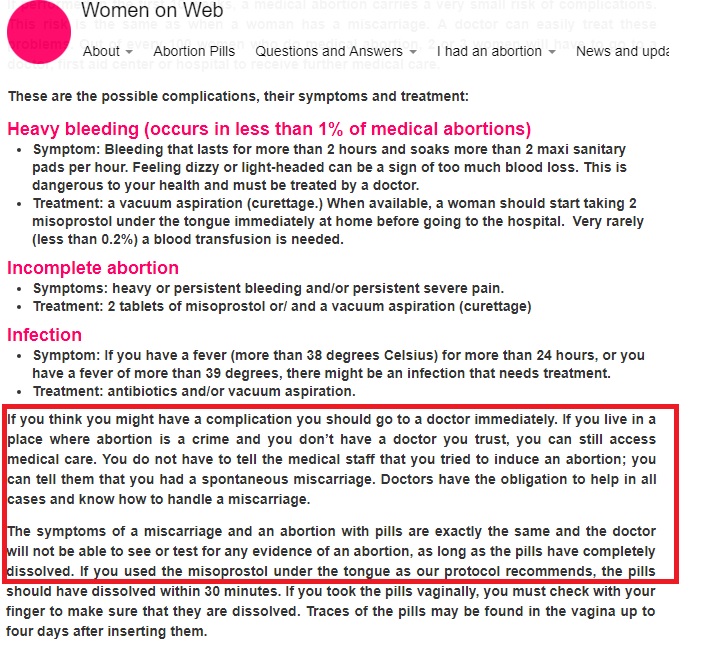 According to a report from The Atlantic, Women on Web’s founder, Rebecca Gomperts, launched the site Aid Access to sell the abortion pill online, against FDA requirements. The FDA recently issued Aid Access a warning letter to cease its illegal activity. Last week, over 100 lawmakers sent a letter to the FDA, asking it to continue to monitor and crack down on dangerous websites like Aid Access.

But that has not stopped other proponents of self-managed abortion, who seem set on placing women in harm’s way. The website Plan C, founded in 2015 by Francine Coeytaux and Elisa Wells, tells women, “Those who choose to self-manage their abortion have no obligation to report that they have used misoprostol and there is no way it can be detected in the body, even if a blood test is taken. Scientists have found that there is no noticeable difference between a naturally occurring miscarriage and the bleeding that happens after taking misoprostol.” 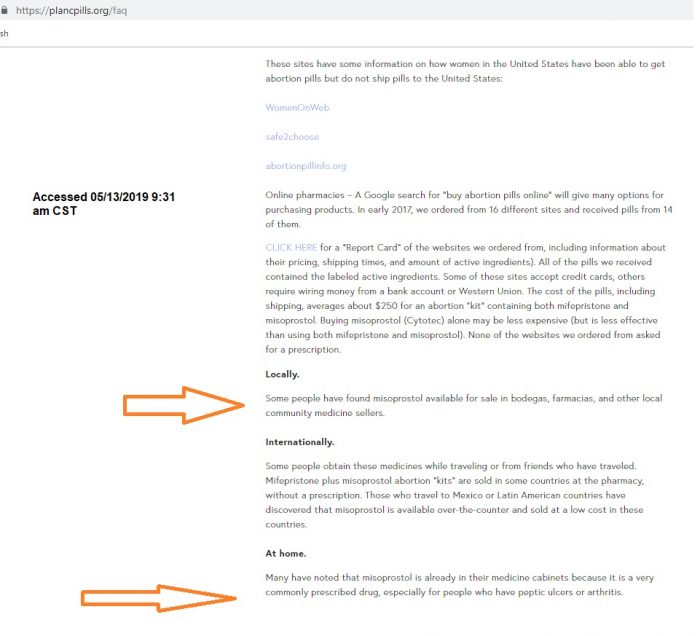 Then, if something goes wrong (and it most likely will), the Plan C website, which is under the fiscal sponsorship of the National Women’s Health Network, advises women to present to the emergency room or other health care offices and simply claim they are experiencing a miscarriage.

Live Action News previously reported how abortion organization, Reproaction, purchased over $4,000 in ads to promote a push for self-managed abortion — something unapproved by the FDA. Reproaction also advises women to seek care by lying about their abortions.

A webinar published in 2018 states in part that women “need information to reduce the risk of arrest… what the signs of a complication are and most importantly what to say if one needs to go to the doctor…. [T]he symptoms of an abortion with pills and miscarriage are exactly the same and the treatment for any kind of complication is exactly the same…. It’s important for people to understand there’s no test for these pills in blood or urine so if they present with a miscarriage they can get the healthcare that they need….”

A tweet from “Helen Bolton” — whose profile implies that he or she is with organized abortion groups “@ReproRights and @TheDoulaProject” — reiterates the deception being proposed: “Misoprostol is basically OTC in a lot of the world and is regularly used to self-manage abortions in places where it’s illegal. Even with complications, the patient looks like they had a miscarriage, so people can go to a hospital (provided miscarriages aren’t investigated).” 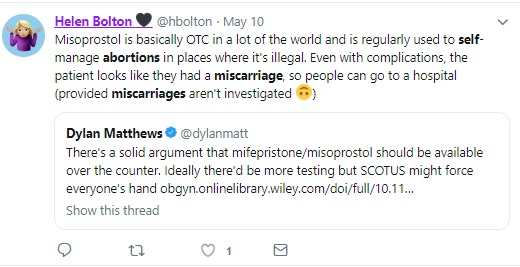 Others have made similar suggestions. 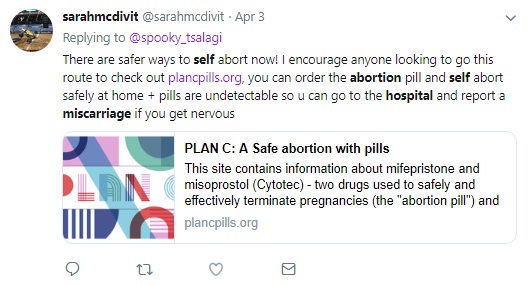 FDA warns women: “Do Not Buy Mifeprex Over the Internet.”

The FDA adds, “You should not buy Mifeprex over the Internet because you will bypass important safeguards designed to protect your health (and the health of others). Mifeprex has special safety restrictions on how it is distributed to the public. Also, drugs purchased from foreign Internet sources are not the FDA-approved versions of the drugs, and they are not subject to FDA-regulated manufacturing controls or FDA inspection of manufacturing facilities.”

According to the FDA’s adverse effects reports through 2018, there have been reports of 24 deaths associated with Mifeprex since the product was approved in September 2000, as well as 4,200 reported adverse effects, including hospitalization and other serious complications.